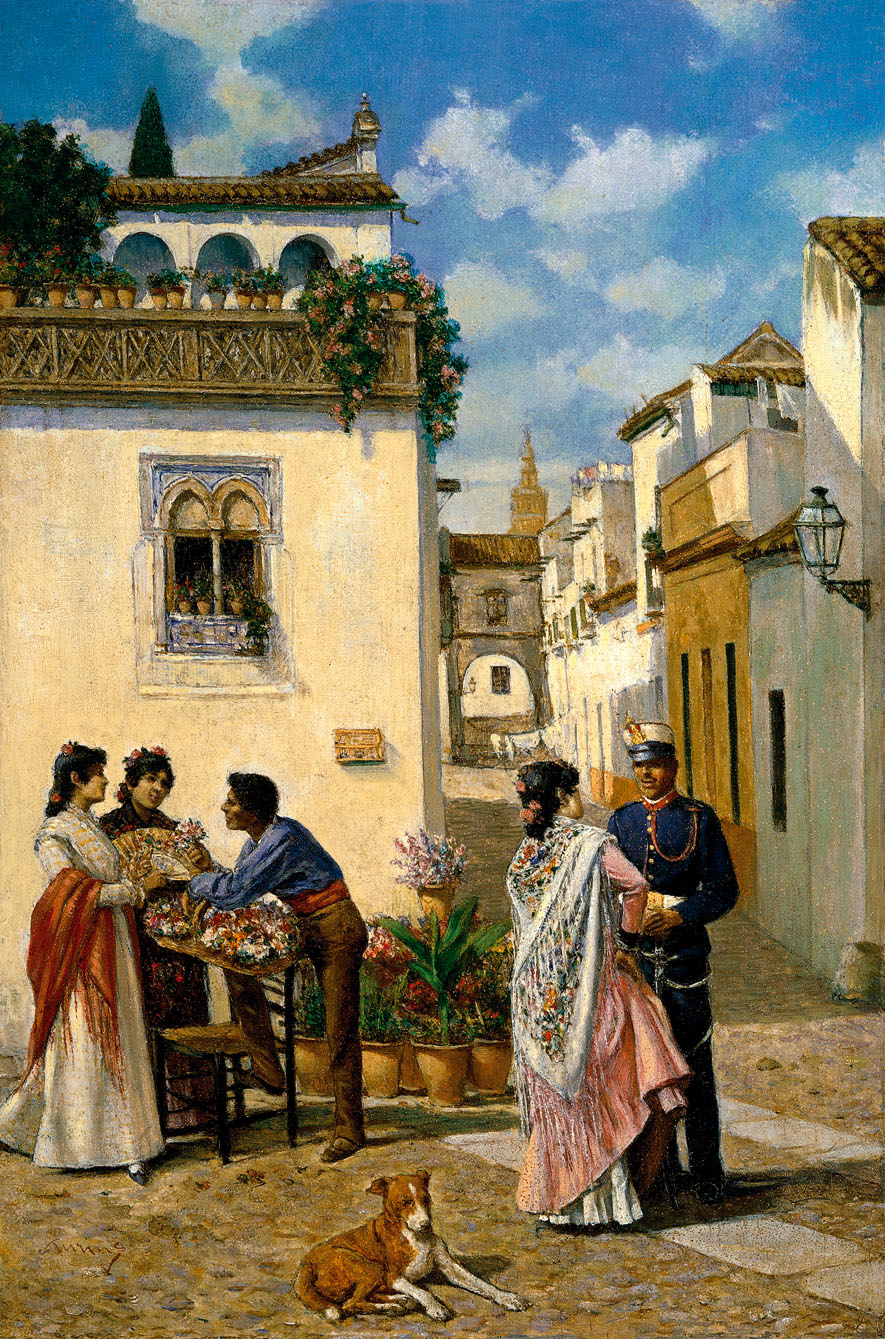 On the basis of its dimensions, which are similar to those of the other panel paintings by this artist in the Carmen Thyssen-Bornemisza Collection, it might be assumed that they all belong to the same series. However, this homogeneousness merely stems from the fact that these and many other paintings, now dispersed, were produced during the reigns of Alfonso XII and Alfonso XIII by Turina and other artists as souvenirs for visitors to the city. In these small city scenes full of local colour, usually set near famous monuments that imbued them with significance, travellers could thus take back with them the quintessence of Seville in accordance with the definition the city had shaped for itself since the early Romantic period.

At an intersection of streets in Seville’s traditional Santa Cruz district, an artillery officer in full-dress uniform engages in friendly conversation with a girl wrapped in a striking shawl, while a flower seller flirts openly with a pair of young women, offering them one of the small bunches of flowers in his basket. His stall is located outside a façade with a mullioned window – found in other paintings by Turina1 – above which is an attractive roof terrace full of plants and flowers like those sold by the florist outside the house. In the distance, at the end of the alley after a bend where an arch is visible above a façade, the bell tower of the Giralda can be made out, helping identify the specific location of the scene and ensuring the authenticity of this small panel painting as a genuinely Sevillian souvenir. The artist includes a naturalistic detail, a dog lying in the dusty street, in the foreground next to the girl chatting to the soldier.

The hasty execution of the figures, who recall those of the Sevillian master José García Ramos (1852–1912), and the sketchy subtlety of the colours of the street façades, whose shading gives the background architecture a pleasing, balanced relief, sum up in this small panel painting the characteristic technique of the Sevillian artist, whose known output is of very even quality. The painstaking attention paid to every small detail of the work makes up for the vague triviality of the subject depicted.

There is a poorer-quality replica of this painting by the artist, with variations, in a private collection. The view is more panoramic and the buildings are infused with an air of monumentality which Turina does not handle with the same skill that he displays in the foregrounds of the works in the collection; he also adds a lively stall selling refreshments on the left of the scene where two women – whose pose recalls that of the pair of women in the version belonging to the Carmen Thyssen Bornemisza Collection – converse with a handsome soldier. The existence of this other version merely confirms the serial nature of works of this kind in which compositional originality was unnecessary, allowing themes to be simply repeated.