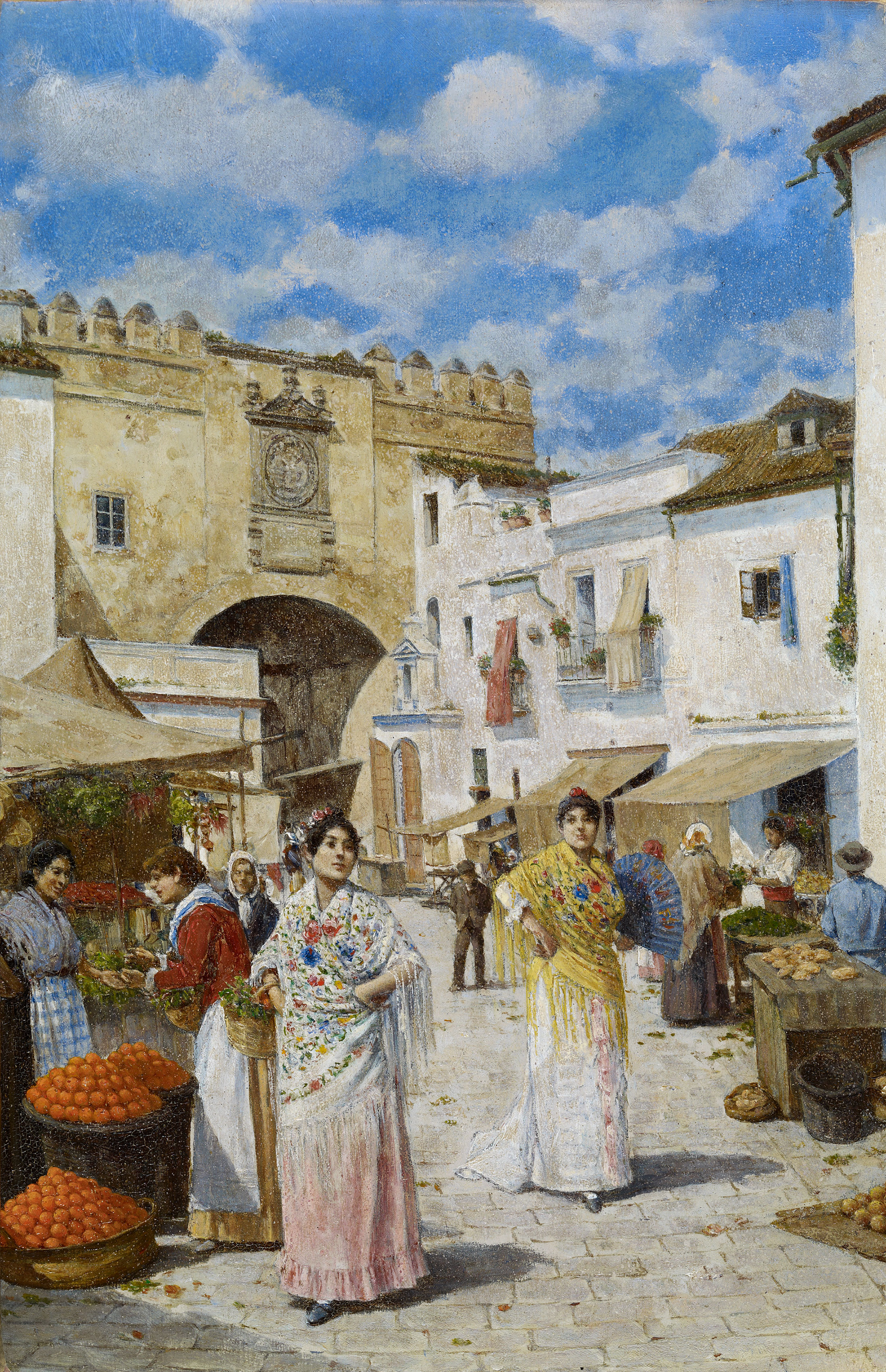 Together with that of the Plaza de la Alfalfa – depicted by Turina in another small panel painting belonging to the Carmen Thyssen-Bornemisza Collection – the market held around the Postigo del Aceite in the Arenal district of Seville, a few metres from the Real Maestranza building, was one of the most important in the city throughout the 19th century, at least for its social repercussions. Although indoor markets were built very early on in Seville, travellers’ guidebooks recommended visiting the open-air kind owing to their picturesque settings, as the streets filled with stalls preserved the traditional local flavour that interested foreigners and, later, Sevillians themselves.

As a result of the measures that led to the demolition of Seville’s city gates and walls following the First Republic, only three remained standing, the Puerta de la Macarena, part of that of Cordoba and the Postigo del Aceite (known in the past as the Puerta de Barcos and saved because it was inhabited at the time). The Postigo (meaning smaller gate) as it stands today was built on the site of some Almohad boatyards in 1573, as stated on a stone on the inner façade – which can be seen in the painting, above the gateway – showing the king, St Ferdinand, in the company of SS Isidore and Leandro. To the right of the Postigo, with its doors open, is the chapel of the Virgen Pura y Limpia, which still stands today.

Indeed, this corner of the city became very popular in the second half of the 19th century and was immortalised in several photographs that are known today. Its fame stemmed precisely from the typical, bustling market held around the Postigo, which photographs portray more realistically than paintings. Whereas Laurent’s photograph, taken between 1866 and 1875, does not show the stalls in detail – owing no doubt to the technical limitations of the time – and portrays it more as a monument than as a showcase for different regional types, the photographs taken by Underwood and by Levy not long afterwards capture the shops and stalls and, above all, focus on the busy activity of the vendors.

Joaquín Turina who, like one of his masters, Wssel de Guimbarda, used significant corners of the city as backdrops for appealing, everyday situations full of typically Andalusian flavour, chooses a simple composition, arranging the stalls on either side and leaving a space in the middle for the passers-by, paying attention to the tiniest details of each corner of the market. Two women wrapped in striking embroidered shawls stand out among the industrious vendors, one carrying her purchases in a basket and other fanning herself with a luxurious blue lace fan.

This small work is very similar in size to two other panel paintings by Turina in this collection. This attests to the fact that they were almost mass produced in this standard format as souvenirs for visitors to the city, as may also be deduced from the scant number of known works by this artist.