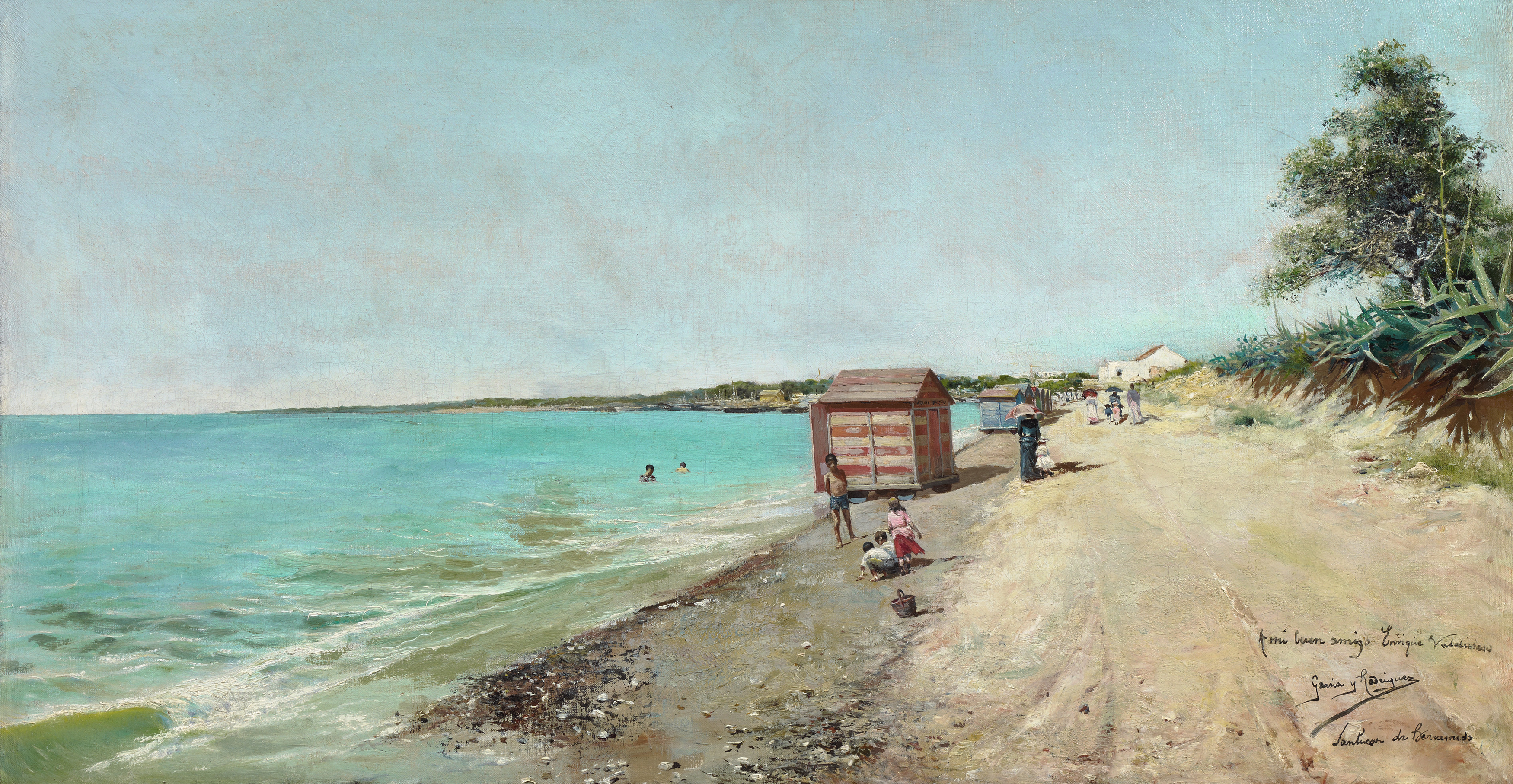 After the arrival of the Duke and Duchess of Montpensier and the construction of their Moorish palace in the province of Cadiz, the cream of Seville and Cadiz society gathered at Sanlúcar during the summer months. In the area around this beach and estuary (directly connected with the provincial capital by steamer), Las Piletas, nearby La Jara Beach and the Bonanza Road, villas and recreational areas sprang up to cater for a new kind of holiday-making society that was beginning to take an interest in sea bathing and the benefits of healthy living. This new attitude was shared by numerous Seville painters who, with the passing of the years, turned from long stays in picturesque Alcalá de Guadaíra to spending the summer in Sanlúcar, to the extent that finally important exhibitions were organised there during the summer months.

This interesting canvas with an oblong composition reminiscent of the scenes of paths and lanes near Seville which García Rodríguez developed around the turn of the century is a view of the beach at Sanlúcar at high tide on a bright summer's day. The area depicted can be none other than the left bank of the Guadalquivir estuary in the direction the river (which must be in the background) takes. Furthermore, boats from the fishing port of Bajo Guía, Pinar de la Algaida and Bonanza can also be distinguished. The relatively small number of beach huts gives an idea of the early stage of development of summer holidays in Andalusia at that time. As can be seen, the huts with their sloping roofs are on wheels and have been taken down to the very water's edge, where the few bathers swim around nearby. Meanwhile, middle-class ladies promenade with parasols, while in the foreground youngsters collect shells on the shore.

The fact that the story is told in a descriptive vein displaying little regard for the effects of the sun and the atmosphere is indicative of García Rodríguez's production of the late 1890s. Furthermore, the fact that the canvas is small in size and also dedicated hints at social relationships and friendships during summertime stays in Sanlúcar. Indeed, this was reflected by other painters in their depictions of the social life and the kinds of folk and situations prevalent during those days at the beach. In this respect, such names as Álvarez Algeciras from Jerez and Joaquín Turina from Seville immediately spring to mind. This painting by García Rodríguez should be regarded along similar lines.