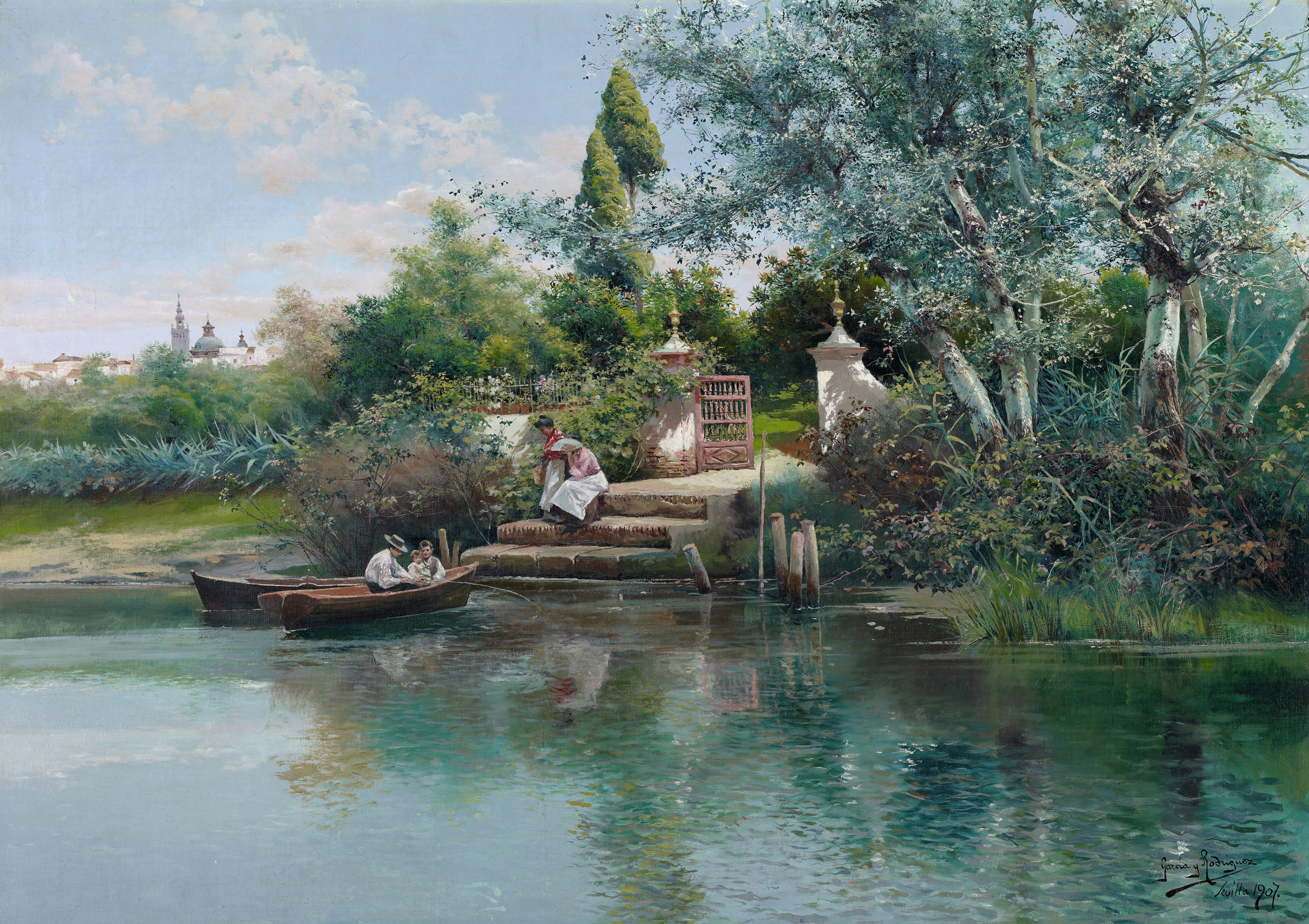 Seville landscape painting as a new genre which burst upon the scene in Andalusian society during the Romantic age clearly originated in the cultivation of the so-called "composition landscapes" and "topographic views" developed by travellers (mainly English and French) in the first half of the 19th century.

These ideas of understanding and constructing the landscape from the pictorial point of view were also adopted and developed by the local Romantic painters, important among these due to his special skills being Manuel Barrón y Carrillo, a lecturer at the Seville academy. It was at the academy where most of the Sevillian painters of the second half of the century received their training. Among them were the future landscape painters who assimilated these principles, with Romero Barros, Sánchez-Perrier, A. Canovas and García Rodríguez himself particularly worthy of mention.

With such precedents it is no surprise that, some time after the turn of the century – 1907 to be precise and the year of the death of the gifted landscape artist Emilio Sánchez-Perrier – that another Seville painter, García Rodríguez, should continue with this kind of production, i.e. painting from sketches originally taken from nature and reworked or reinterpreted in the studio. His landscapes were generally "assembled" like intentionally constructed stage sets, with the emphasis on picturesque elements presented in naturalistic ways, to all of which, using a method very typical of the time in Sevillian painting, light effects were finally added.

As in Martín Rico's and Emilio Sánchez-Perrier's paintings, the scene is presented with a foreground of water and reflections where figures in a boat and on a landing-stage enliven and justify the composition’s genre painting point of view. The two female gardeners watching the boat from the steps leading down to the river display details indicative of the artist’s interest in describing types of people: for example, one sits, waiting for the sun, her head covered by an open fan in a popular, graceful Andalusian pose. Behind the woman a gate with climbing plants and brambles leads on to a pathway and an old, fertile garden on the banks of the Guadalquivir, sheltered by poplars, oleanders and well-established old cypresses. To the left, the river bank limit of the property is closed off by a line of agaves more typical of countryside paths and boundaries. Above this vegetation, the horizon rises, broken by the city skyline with a Baroque dome clearly visible and, most distant of all, the Giralda.

The composition is the evident result of random features inspired by the rural estates and areas around Seville (the favourite haunts, together with the picturesque and lush Alcalá de Guadaíra riverbank, of the first Sevillian plein air artists, among these García Rodríguez). However, to judge this work as a strictly plein air painting in not in the least concordant with the artist’s method. Rather, it resembles a stage set recreated from notes, memories and impressions (including those of light) taken from nature in which popular customs and generally the picturesque are more prevalent than the capturing of light itself. Overall, García Rodríguez's landscape work is to naturalist landscapes what genre painting of anecdotes and typical local folk are to realist figure painting. This kind of painting will always be linked to the commercial and social phenomenon of the tableautin. Overly-pleasant in circumstances and situations, amid a picturesque, theatrical landscape, this inconsequential scene serves to confirm such an impression.