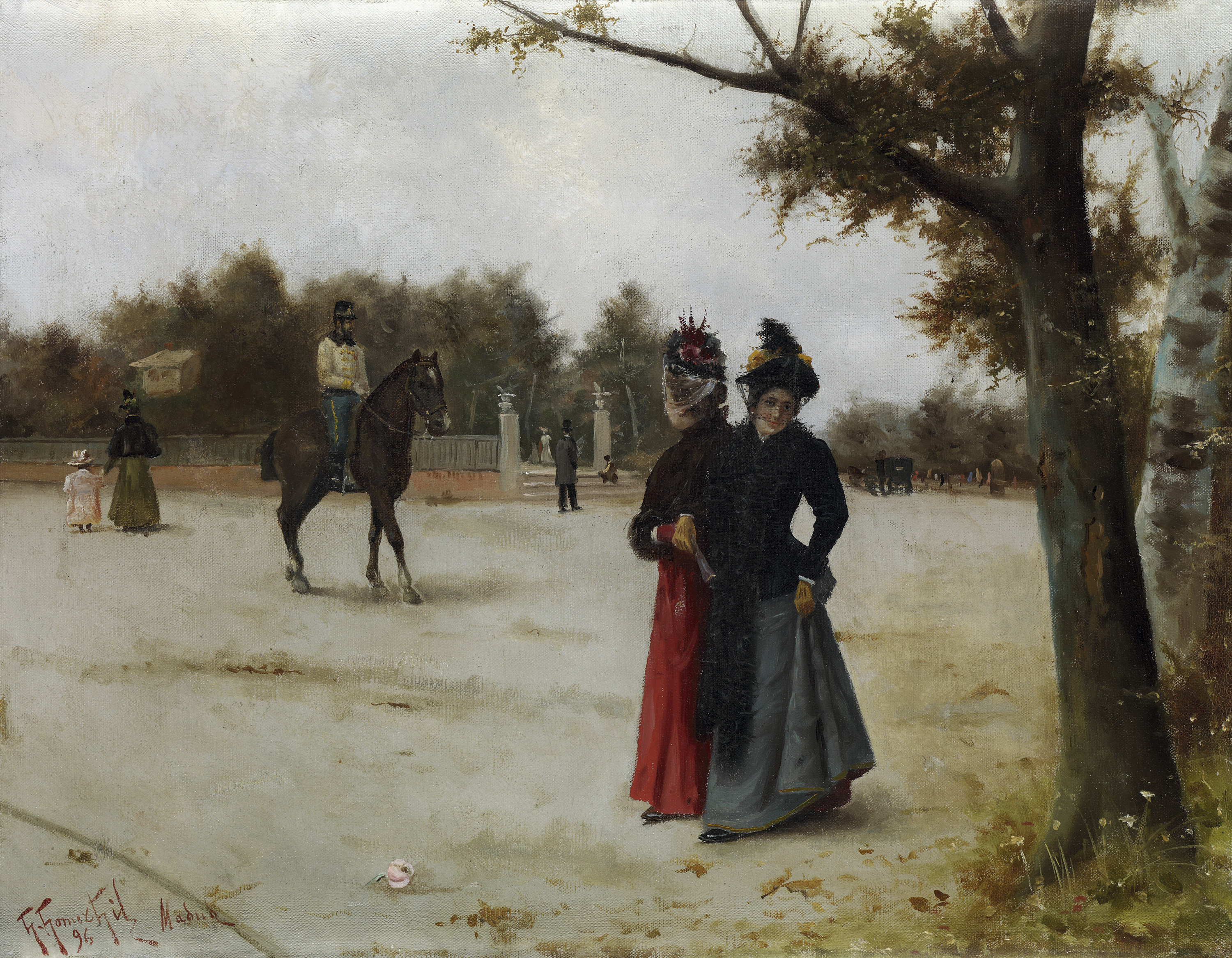 A Walk in the Park

Guillermo Gómez Gil probably moved to Madrid in 1890 or the year after, as his address in the National Exhibition catalogues is listed as in the capital and themes very different from the seascapes he had been painting in Malaga under the guidance of his teacher Emilio Ocón had begun to appear in his work.

Between 1891 and 1896 his production includes scenes with the composition centred around a single figure, usually female. Women dressed in the fashion of the time, with short-brimmed hats adorned with flowers, and delicate veils partially covering their faces, generally in profile; women defined with sharp outlines which cut them off from the scene surrounding them. Sometimes they form part of a more complex scene, as in this picture, A Walk in the Park.

The setting appears to be Madrid's Retiro Park and expresses the artist's interest in recording the everyday directly. Gómez Gil made every effort to convey that immediacy through the precision with which he fixed movements. Rendering them by freezing the action – as in the case of the figure in the foreground, who appears to have been surprised in mid-stride – he thus underlined a movement in order to express spontaneity.

When this painting is compared with another entitledPaseo en barca ("Boating" – Malaga Town Hall) – which possibly features the Retiro Park lake, as the couple's clothes and the type of boat in the picture suggest (although the painter would have us believe that it is set at sea) – it becomes obvious that once in Madrid Guillermo Gómez Gil ventured into a very moderate kind of realism based on studies of everyday situations. Works of this kind may seem to indicate exercises to retain the natural. However, the inertia of the recomposition – the mixing of images that transfer the scene to a fictional situation – is not concealed.

Nevertheless, this is not the case with A Walk in the Park, a painting in which the artist strove to convince us of a reality created with formal templates, the result being a pleasant picture along the lines of veracity but with little fluency in its resolution. It is, nevertheless, extremely expressive and some parts are well-executed – the trees over the figures on the right which invite us to assess Gómez Gil's skills as a landscape artist, for instance.

The palette is also a new one, since his seascapes did not allow him to use many more tones that those of ochres for coasts, cold colours for sea and sky and warm ones for the light of the time of day chosen (a controlled range which should always appear modulated and coordinated). However, in this work and similar ones from Gómez Gil's Madrid years, the palette varies and is enriched by the bold use of suggestive red spots which are countered by darker ones, thus creating a colour contrast more daring than that observed in his pleasant marine paintings.

A Walk in the Park