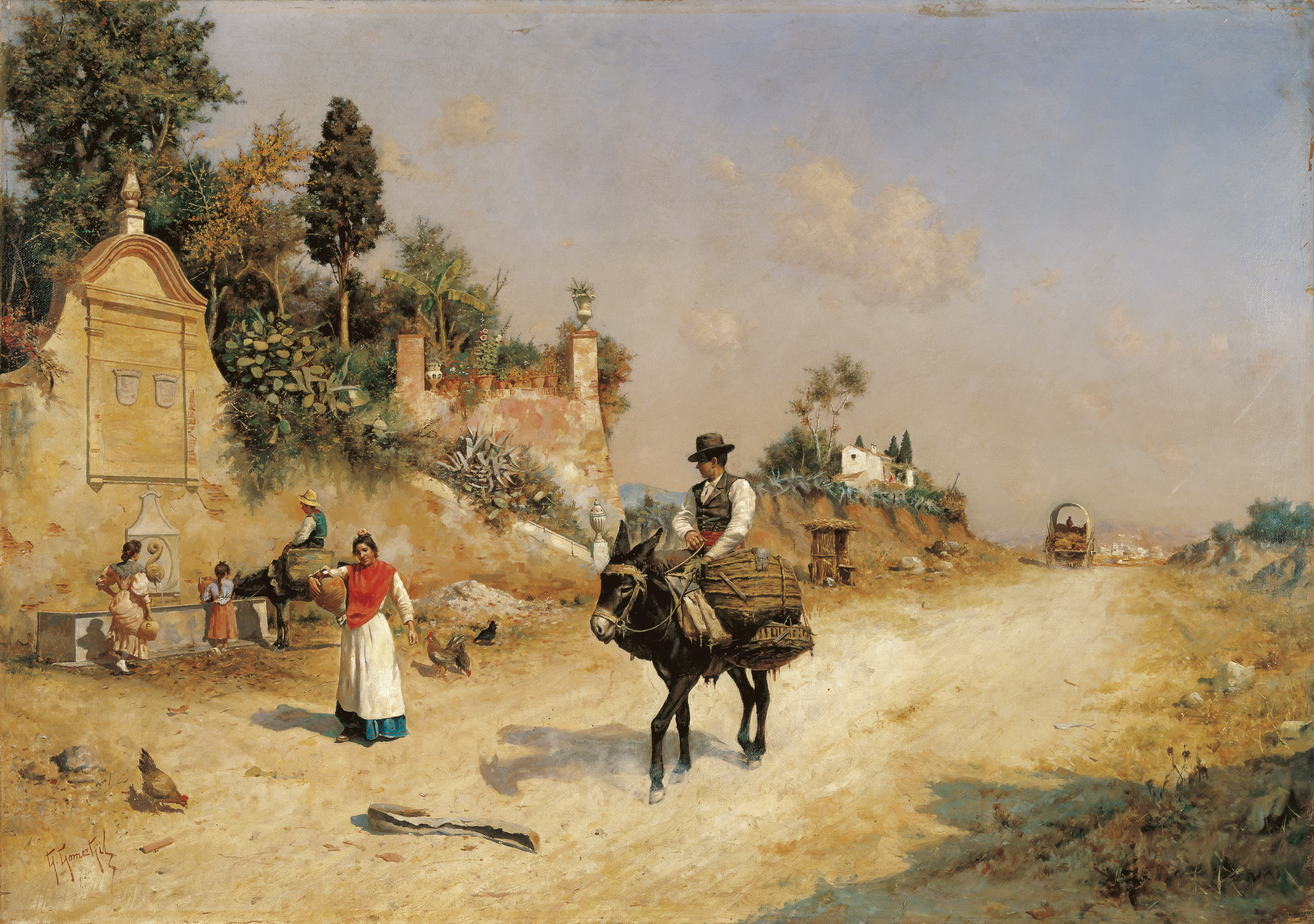 The Reding Fountain. By the Fountain

Although in the Spanish art world Guillermo Gómez Gil is known as a painter of seascapes, his biography shows that he was basically devoted to commercial painting; indeed, if the circumstances so required, he took part in exhibitions with flower and Orientalist paintings. The present work was executed for this purpose and may be classified as a genre painting despite its late date of execution.

The composition is centred around the Reding fountain, a landmark that stands for the urban development plans for Malaga’s eastward expansion. It was originally a symbol of a programme for modernising the city’s infrastructures in the 17th century (1675), as stated on the stone plaques adorning its front, which was altered to the shape of a fish-shaped mask during the reign of Charles IV. The Reding fountain marked the starting point of one of the main access routes to the city – the Camino de Vélez – and the square that sprang up around it provided the setting for genre scenes such as those depicting common folk fetching water.

In the 19th century it became integrated into a residential area of houses inhabited by Malaga’s haute bourgeoisie. As a result its significance was enhanced and it became a historic reference to an area that was synonymous with the city’s progress and economic wealth.

The fountain captured the attention of José Moreno Carbonero and Rafael Murillo Carreras, who painted works similar to that of Gómez Gil, presumably after 1885, the date the area underwent development. This may be inferred from details such as the lamp-posts in Moreno Carbonero’s painting and a boulevard in that of Murillo Carreras, both of which are absent from Gómez Gil’s work.

Although undated, the present work could be attributed to the artist’s early period, before the works were executed by the aforementioned painters, as the spot depicted by Gómez Gil shows the road lined by humble dwellings and with no signs of urban development.

The composition also suggests an excessive compliance with academic rules, as the centre features a rider on a donkey with panniers for carrying wares, and everything else is arranged accordingly. The fountain and water sellers occupy the left of the picture space and the road to Vélez, crossed by a wagon, the right.

Both the rider and the female water seller, who are isolated in their respective spaces, reproduce prototypes rooted in genre painting. The technique, with contours that are generally very pronounced, isolates the forms and results in harsh, somewhat stereotyped outlines. Lastly, the palette – very bright and festive – denotes a close link with the teachings of Bernardo Ferrándiz, who was active in Malaga until 1885 and the master of all the painters exercising in the city during those years; Ferrándiz’s influence is likewise responsible for the lack of interaction between the figures and their surroundings, a flaw that is usually found in the works of the Valencian painter.

The above reasons lead us to conclude that the painting was executed at the start of Gómez Gil’s career, when he drew directly from the formal models of his masters Ferrándiz, Ocón and even Moreno Carbonero, as suggested by the handling of the sky.

Nevertheless, this is a delightful work that represents a type of Malaga painting based on the depiction of customs, a model that allows the artist to produce paintings that are straightforward in meaning and where the direct perception of real life is tempered by the anecdotal nature of the situations he chooses to represent.

The Reding Fountain. By the Fountain