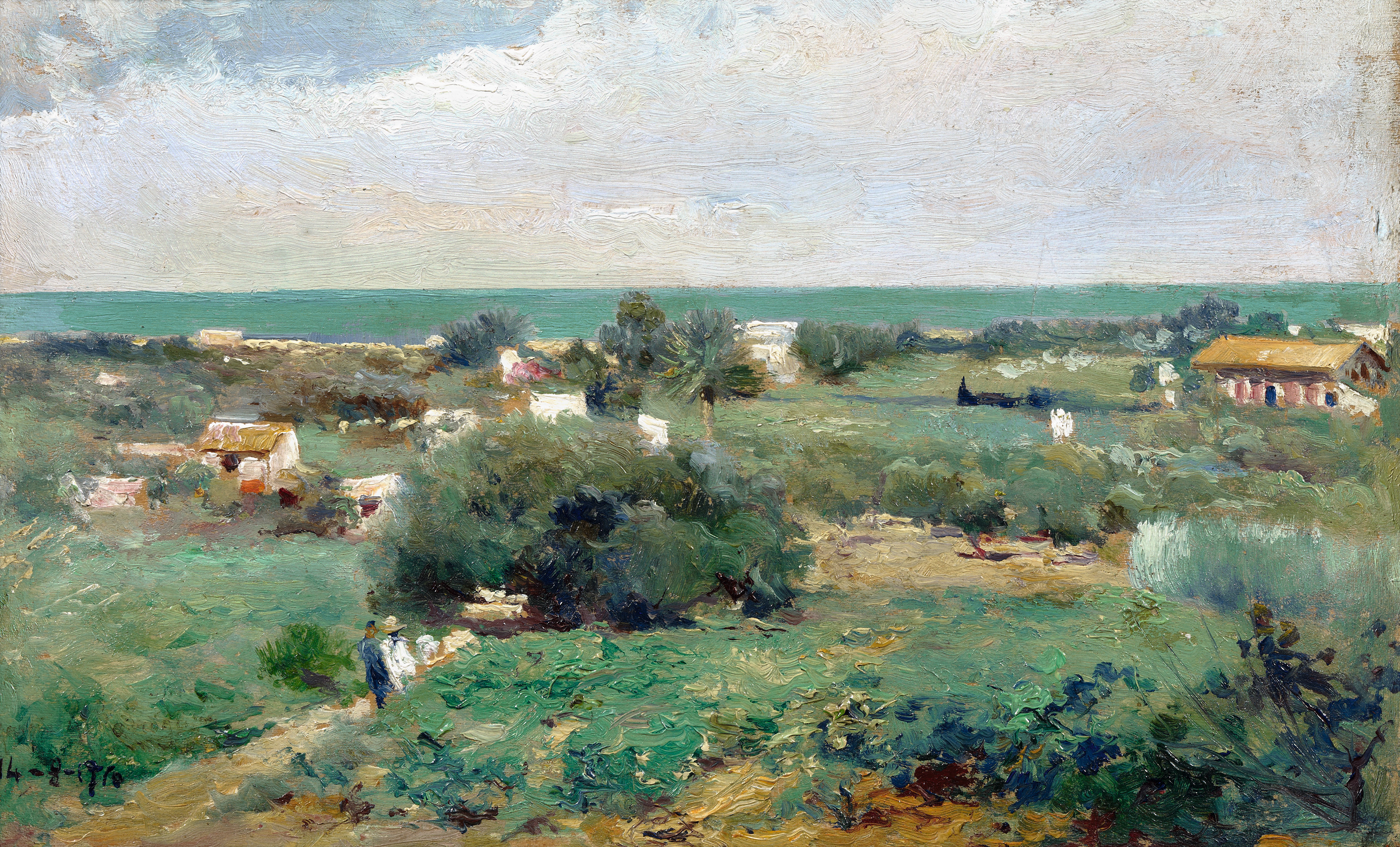 The painter Manuel García Rodríguez, who dedicated himself almost solely to landscape painting and belonged to the generation of artists active during the second half of the 19th century in Andalusia, can be considered an outstanding figure among the small number of pioneers of landscape painting. With his long stays in different parts of Andalusia, his dedication was indeed both intensive and extensive, and his substantial production spans a number of phases culminating in what can be loosely defined as a descriptive kind of luminarism seasoned with snippets of genre figures and scenes. These generally refer to picturesque places with evocative histories or to idyllic corners, which he executed in a précieux manner for the visual delight of the spectator.

For years García Rodríguez practised landscape painting in the area around the Andalusian capital and the banks of the River Guadaíra with another painter from Seville, Emilio Sánchez-Perrier, but it was only in the last decades of the 19th century, with the permanent establishment of the Puerto de Santa María-Sanlúcar de Barrameda stretch of railway line, that he used Sanlúcar and La Jara as his bases, and his whole production can therefore be said to have experienced a continuous landscape period revolving around the Guadalquivir estuary.

The final impetus to complete the "coast train", i.e. the Puerto Santa María-Rota-Chipiona-Sanlúcar de Barrameda route (which would remain in service until 1984, when it was closed down as unprofitable) was provided by a Belgian-financed company contracted to finish the work and operate the line. The train itself was slow enough to allow passengers to thoroughly enjoy the beauty of the Bay of Cadiz, an area with which the inhabitants of large cities had hitherto been unfamiliar. But it was not until 1898 that the Sevillian artists who pursued those themes began to arrive at the coast in greater numbers. The route consisted of a number of stations and halts, one of which was at La Jara near Sanlúcar. In this small panel, the station building with its gable roof can be seen on the right next to a very sketchy locomotive with a smoking chimney. It stands among plots of land, country roads and vineyards, all near the sea. This way of painting directly from nature can also be seen in the production of other landscape artists of the Seville circle such as Sánchez-Perrier, José Arpa, Rico Cejudo, Gil Gallangos and – somewhat later and very closely linked to La Jara – Manuel González Santos.

The fresh material offered by these new Andalusian views was to prove so appealing to Manuel García Rodríguez that he began frequenting the area in the 1890s, focusing his work on the entire coast of Cadiz, and particularly the area around Sanlúcar, which at the time was a booming, genteel locality and a pioneer in Andalusia of the then fashionable "sea baths". It was also an agreeable summer holiday resort offering visitors the opportunity to partake in rural life near the bright, revitalising coast at the Guadalquivir estuary opposite Doñana.

The connection with the town, traditionally by a daily steamer link with Seville and now via the new railway line, was decisive in facilitating the arrival of holiday-makers of a certain social class from Jerez and Seville at what was undeniably a "summer court" – graced by the presence of the Duke and Duchess of Montpensier, who every year spent the hot season at their local palace residence. Acceptance of the "healthy lifestyle" grew and little by little extended among those Andalusians who aspired to enjoy periods at the seaside. This was a process parallel to the development of a kind of plein air painting by artists attracted by rural and coastal themes.

A number of views of Sanlúcar beaches and spots along the coast from a period prior to this panel were also painted by Manuel García Rodríguez. This very small direct study is of La Jara, which was a special favourite of summer residents who rented or owned rural properties there and wished to live close to country life amid vineyards, orchards and sugar-cane plantations near the sea. Dated 1910, it is clearly an exercise in plein air painting, with the view of the sea in the background forming a rural scene with no particular message. The painter rendered a sensation of bright light from the coast itself while analysing light and planes of greenery between groves, hamlet and vineyards, all through mixtures of different tones on the palette applied immediately, directly and intuitively to the surface. This was a direct, instantaneous technique particularly close to that used by the French Impressionists or comparable to the style of painters like Beruete or Sorolla in Spain, and subsequently gained international acceptance as crucial to modern landscape painting.

It should be remembered that by that time Andalusia had been visited by many painter-travellers – not only from all over Spain but also from abroad – who irrefutably adopted that luminarist technique. In this respect, the Valencian artist Joaquín Sorolla must be mentioned with his continuous sessions in Seville's Alcazar gardens from 1908 or his painting Triana Bridge, Seville. It is through examples like these that the assimilation of this type of luminarist painting in Andalusia can be understood.