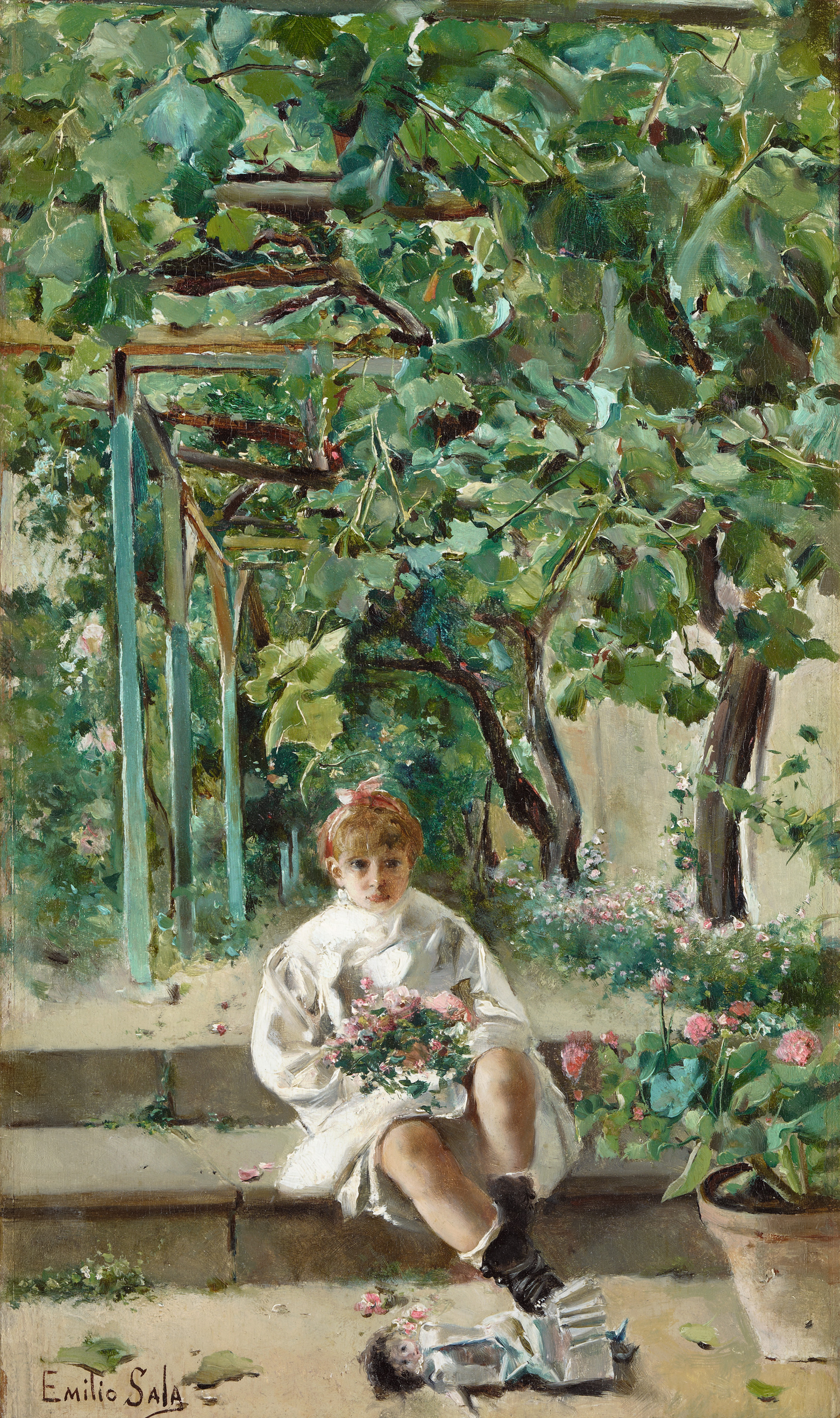 Abandoned Doll belongs to the large number of paintings by Emilio Sala whose basic theme is human figures in gardens. With this subject he was in fact following a cultural fashion which led groups of painters in the second half of the 19th century to depict scenes in the open air surrounded by a docile, homely version of nature. Scenes were common of people playing games, congregating, strolling or resting in small household gardens, as well as with members of the middle class and bourgeoisie who were in a position to enjoy such surroundings. French artists of the last quarter of the 19th century found these themes particularly interesting, as did other painters from all over Europe who travelled to Paris to seek out new subjects and alternative technical and visual approaches. Abandoned Doll may have been painted between 1887 and 1896, when Sala had already settled in Paris, although he often returned to Spain during that period to present pictures at exhibitions. He also married there and indeed, the model who posed for this painting may be his only daughter, Marcela. The unusual type of garden in the painting – with a pergola and vines and a flowerpot with geraniums – suggests a Valencian origin. This might be explained by Sala's frequent trips to that city, known from records in the local press and correspondence with a number of friends, including the painter Ignacio Pinazo.

Sala stressed a constant aspect of his production in this painting: females as a central theme, in this case a girl who has left her doll on the ground. This anecdotal theme can be compared with other pictures with girls like Escena de coqueteo premature (“Scene of Young Coquetry”) or La amiga íntima (“The Intimate Friend”), the latter again with a story of a girl and her doll.

In fact, from the very beginning Sala displayed a definite preference in his work for plein air themes with women or girls in gardens, like those proposed by certain refuses or independent painters in Paris. Here the setting is a charming Valencian garden with a girl rapt in thought, a bunch of flowers in her hand, sitting on steps leading to a pergola. At her feet is the doll from which the picture takes its title. The girl is framed by the huge arbour of the pergola, which fills the whole upper half of the canvas. In the foreground the flowerpot containing geraniums acts as a counterbalance to the doll while stressing the theme of the study of a garden in the open air. In this painting, Sala used a limited colour range based on different shades of deep green and applied the impasto swiftly with broad brushstrokes. For colour contrast he positioned the white dress of the girl at the centre with the thick tunnel of the pergola behind her in the background, thus neutralising interest in specific thematic questions by emphasising the arbour. Each compositional item – the girl, the flowers, the doll, the flowerpot, the architectural elements of the pergola, the dark space in the background – serves as a support to receive the ambient light and form a contrast between the areas in darkness and those lit. In this respect, the critic Balsa de la Vega wrote: "With Sala originality is an obsession; not an obsession arising out of a desire to stand out but because he is seduced by the contrast of colours and the effects of light."