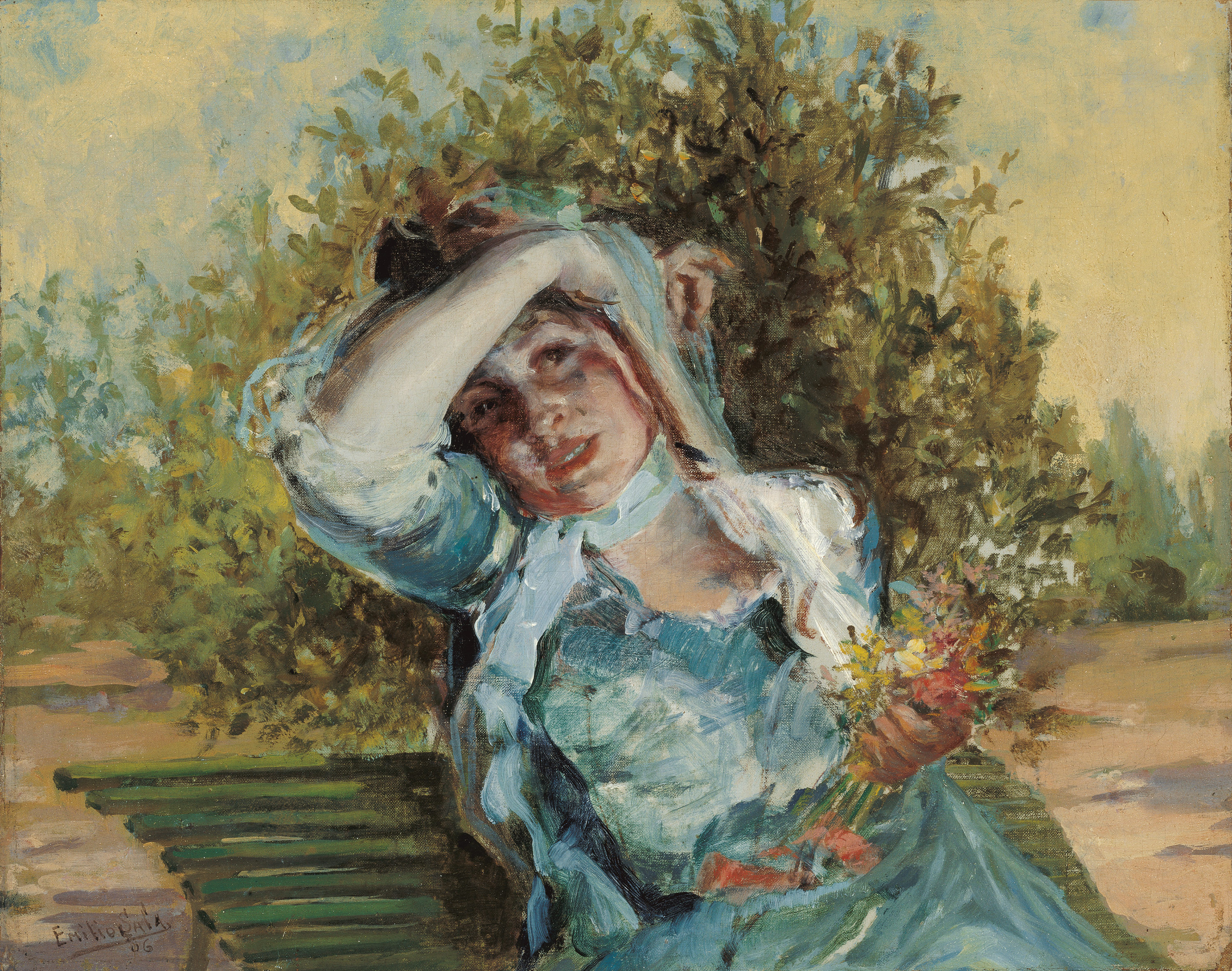 Having achieved a certain measure of success with portraits and murals in Madrid, Emilio Sala decided in 1885 to apply for a merit grant at the Accademia di Spagna in Rome, which at that time was directed by Palmaroli. The grant took effect on 1 October of that year, one condition being that Sala must stay in Rome until 1 November 1888, with the possibility of a one-month extension.1 However, on 31 March 1887, Palmaroli allowed Sala to move to Paris temporarily, which became "indefinitely" as he never returned to Rome. Sala stayed in Paris until 1896 and then returned to Madrid, from where he may have kept in touch with his contacts in Paris.

From the thematic and technical points of view, Girl with Flowers is very closely connected with the type of pictures which Francisco Domingo produced in Paris, and the theme of female figures in natural surroundings or gardens is found in his work particularly between 1888 and 1893. Examples such as Modernista de antaño (“Modernist of Days gone by”) Concierto en el bosque (“Concert in the Wood”) and Columpio entre flores (“Swing amid Flowers”), all revolve around the anecdotal situation of figures in gardens or woods. The idea of figures depicted in a bright, clear natural environment while retaining traditional aesthetic criteria proved attractive to the tastes of the French public of the age.

In paintings of this kind, Sala used one central theme consistently throughout his career: women. Perhaps as a result of his unsatisfactory private life, females – whether young or old, vulgar or sophisticated – were frequently the theme to which he dedicated intensive research into technique and colour tones. Girl with Flowers can also be compared to In the Garden, which Sala presented at the Circle of Fine Arts Exhibition in 1898. From a technical point of view, however, Girl with Flowers is much more advanced than the paintings mentioned above. It is a rapid impression of colour in the open air with the bright midday sunlight shining on the young girl's face emphasising the dissolution of form. Sala used this theme as a vehicle for research to illustrate the theories on colour which he set out in his book Grammar of Colour, published in the same year as Girl with Flowers appeared. Furthermore, like Sorolla at that time, Sala managed to maintain in this painting a certain balance between the solidity of objects and their immersion in an atmosphere with strong lighting and colour.

In Grammar of Colour Sala explained how he had achieved this: "The secret comes down to what in music is known as transposition, which is taking care to ensure that the intervals from one key to another are the same between copy and original, whether the starting-point is higher or lower."

As Sorolla frequently did in his paintings, Sala used a basic colour range – yellows, whites and blues – which he enriched with a varied palette of greens and touches of salmon pink and red. As was also the case with many of Sorolla's paintings, Sala’s brushstrokes were rapid and of varying lengths.

Sala took the young girl's face as a basic compositional element, creating around it a spiral formed by the arm framing the head and the hand holding the bunch of flowers, which he extended to the hedge to form a kind of aura around the figure. At the centre of this spiral the facial features become vague and distorted beneath the intense chiaroscuro formed by the sunlight and the shadow cast by the raised arm.

The application of his research into colour together with the influence of French painting in works such as Girl with Flowers were not always appreciated by the critics. In 1893, Augusto Comas Blanco also condemned Sala for: "[...] wasting his exceptional qualities, with no evident benefit for his personality, by insisting on interpreting reality with all the prejudices which necessarily and fatally arise when one decides to copy the natural with the previous knowledge of how it should be interpreted." He added: "He should be concerned about the pernicious influence which contemporary French art exercises over him [...] and behind this I see, not without some regret, Sala's long and unnecessary sojourn in Paris." However, it was above all after his death in 1910 when the criticism intensified. In an obituary on the painter, the critic Rafael Domènech stressed the following negative aspects: "Emilio Sala had true artistic temperament; but [...] he had within him a certain analytical and ideological spirit which, not being duly cultivated qualitatively and quantitatively, was a negative element when it could have been positive." And one year later the painter Aureliano de Beruete wrote: "In 1884 he left Spain and did not return for some years. He went first to Rome then to Paris. That absence was not beneficial for his production."