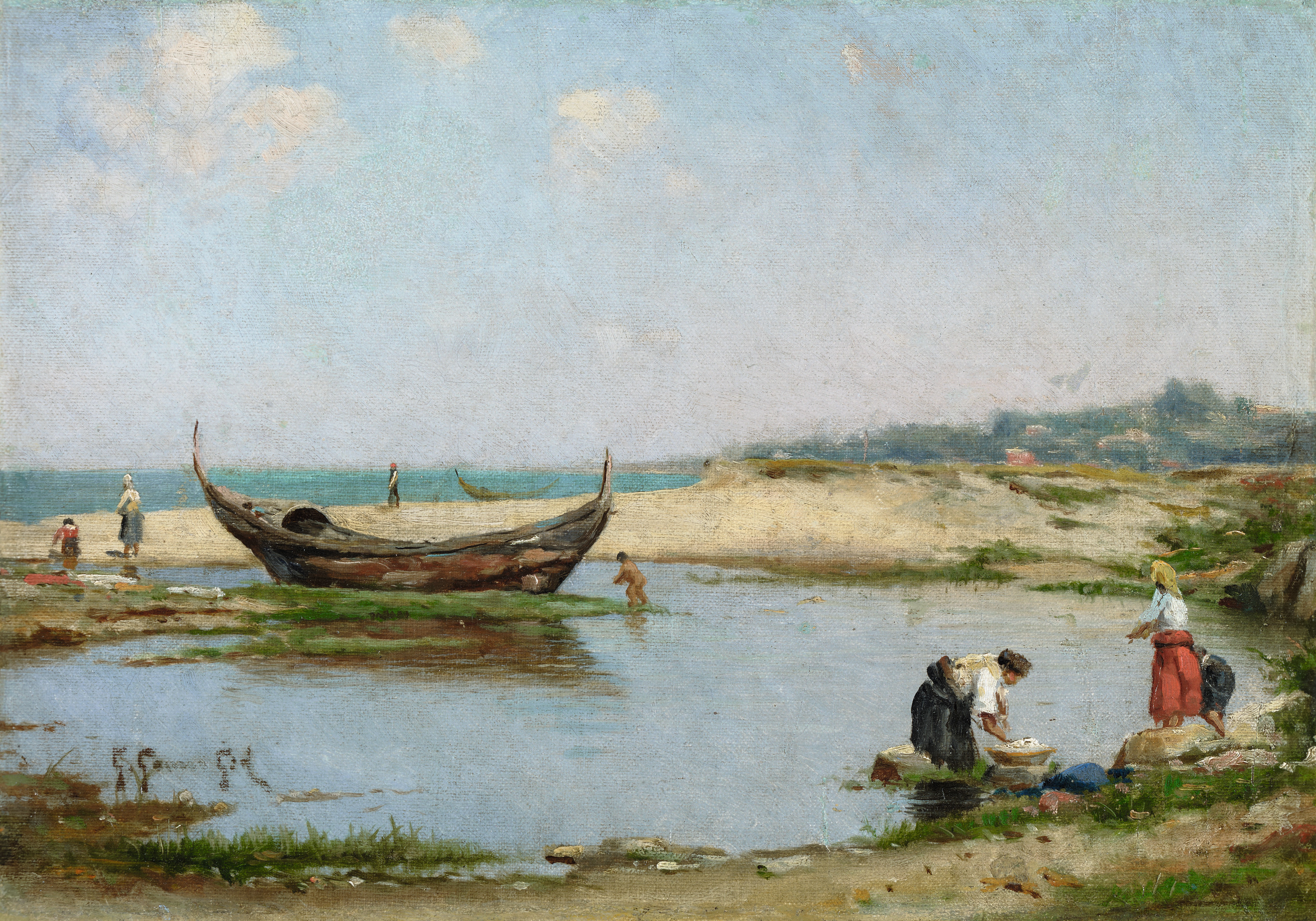 Women in a Cove by the Beach

Iconographically speaking, this small painting by Guillermo Gómez Gil can be classified both as a marine and a genre painting, since the narrative is so important that it diverts the spectator's attention away from the geographical features.

Women working in a cove suggests some kind of activity from everyday domestic life. The baskets, clothes, naked children in the water... have all been captured as if in a snapshot. The whole scene unfolds in an instant – a sensation reinforced by the pictorial treatment.

At first, the painting looks like a bozzetto, the record of an occurrence that has seized the painter's interest. The touch of the paintbrush was swift, loose and precise with economy of outline resolving the challenge of freezing the moment in time.

The palette is submitted to the hierarchy of the light, since the painter was interested in capturing a colour which could identify an area. There is a brightness, a power in the palette that prompts thoughts of some territory or coastline in the north at a time of the day when the sky is relatively clear. It should be borne in mind that this is a painting without pretensions: it is light, fresh and has not undergone the screening process of the studio or the finishing touches that turn a picture into a work with pretensions.

This is an exercise in recording that reflects an interest in the simplicity of the everyday and spontaneous and cannot be considered a detailed bozzetto. Indeed, due to the firmness of the annotation and the control displayed in capturing the atmospheric, it becomes a testimony to the painter's professionalism. Nature confidently overlaps with figure and action, and from within that balance there emerges, where literary and technical narrative are concerned, a fresh and solid composition. But once again the determining factors of training and dependence on the market are revealed.

The independence of the immediate gaze is lost at the moment when the painter turns his head to include a number of elements and balance forms by situating the compositional weight of the mass of the figures with the boat and the other figures, whose weight lies not only in their volume but also in their colour. Here the colour counterbalance is intentional in the browns of the wood and the clothing of one of the women with the blues of the waters. Furthermore, like a vehicle for freshness and naturalness, the tone of the stagnant water of the cove contrasts with the deeper blue of the sea and acts as a kind of pendant to the green of the meagre vegetation.

The fact that the painting is unpretentious does not automatically make it a minor work in Guillermo Gómez Gil's production, but simply a record of compositional reflection made before nature. It would serve him for making further examination of that territory, other views of those coasts, with the same aim of recording the topography of Spain through its defining geographical characteristics, in accordance with that institutional spirit – of the Free Teaching Institution – which proposed a renewal of Spanish artistic culture through landscape, especially of the kind which underlined the diversity of the Spanish nation in a desire to define its territory.

Women in a Cove by the Beach