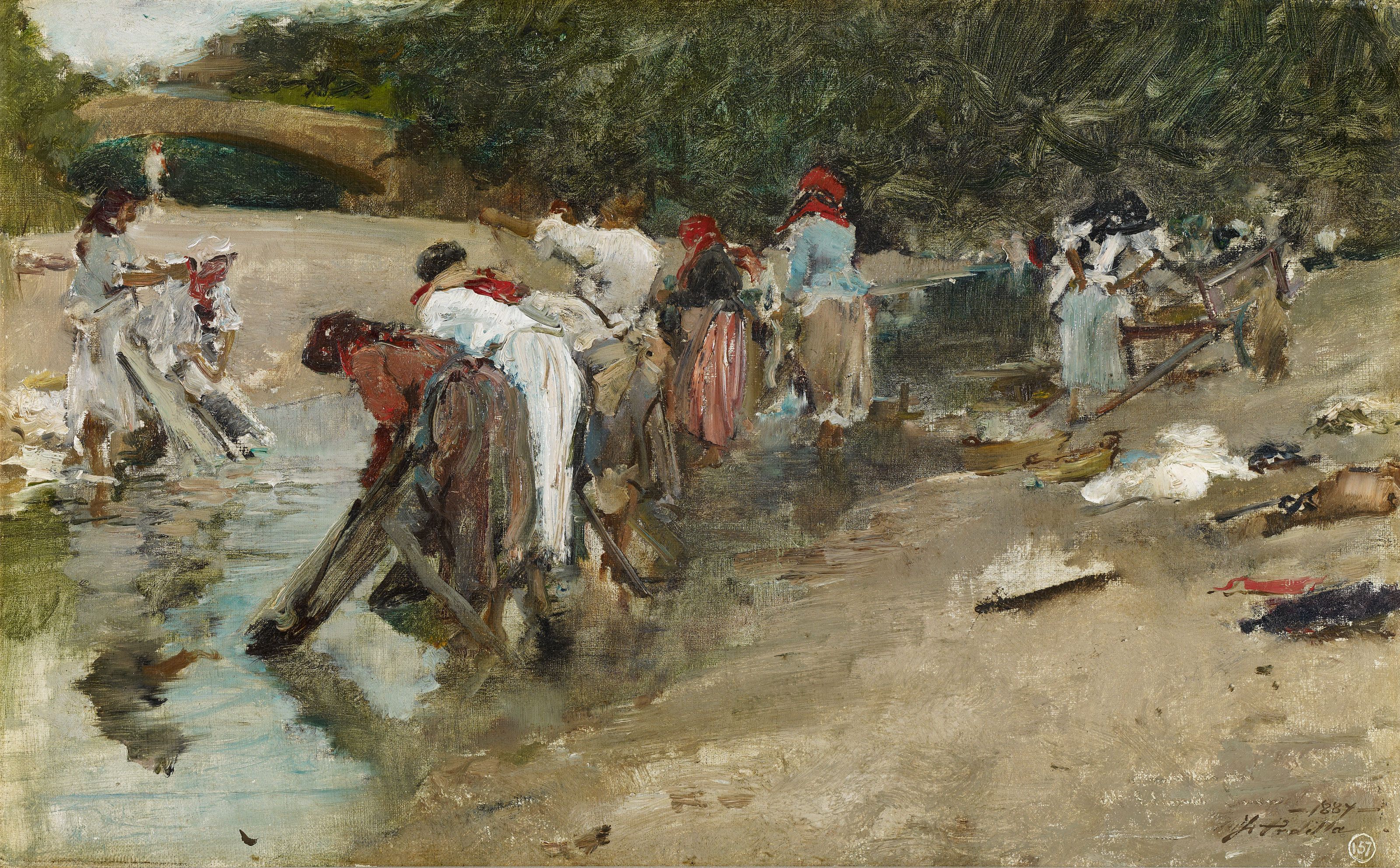 One result of direct observation of life as a more or less informal practice or exercise in painting is this beautiful bozzetto in which the artist pursued the effect of spots of colour and juxtaposition of coloured masses within a framework of greens suited to rural scenes. The vivacity and immediacy of the scene are achieved by the naturalness with which the postures of this group of washerwomen are captured. The largest group – as many as seven – is arranged diagonally from left to right along the bank of the stream, which enters the canvas from lower left, reflecting in the foreground on the left a woman bent over a washboard. Just above the mid-point, the watercourse turns sharply to the left to vanish in the upper area on the same side under an idyllic little bridge that is mostly hidden by greenery. It is only in that small corner where a tiny patch of sky is visible. Two more washerwomen – one reflected in the water – stand on the left bank, while on the right another female figure, half-hidden among the branches, stands by a handcart with her back to us, tying her apron strings in a charming pose of unconscious elegance. All of the unfinished foreground on the right, where traces of the priming can still be seen, lacks characterisation, except for a few small spots of colour with indistinct outlines suggesting garments or headgear lying on the ground.

In one biography, this colour bozzetto has been linked to a period of withdrawal by the artist to Galicia after the death of his third daughter, Isabel, at the age of three, which in turn occurred shortly after the death of his brother.1 Indeed, the connection with Galicia is referred to in the title, although there is no way of knowing exactly where. The almost perfect circle with the number inside it, on the other hand, can be identified as an attempt by the painter to catalogue the picture. Other known versions of washerwomen in Pradilla's oeuvre, however, cannot be connected with this one, except for Lavanderas junto al Puente ("Washerwomen near the Bridge"), through which, despite being little more than a dash of colour with indistinct figures, it is possible to identify as the same place, thanks to the inclusion of the bridge. Nevertheless, we can still only presume that the place is Galicia because of the title.

Whatever the case, a theme like the one in this canvas belongs more to genre than landscape painting. However, regarding the second picture, we might cite a passage written by Pradilla himself on the virtually contemporary (1889) painting La ribera de Vigo ("The Shore of Vigo"): "I set myself the goal of studying, as far as possible, before nature, the truth – we might say objectively and subjectively speaking – of picturesque scenes in the open air, with the intention also of infusing each of those scenes with the light of different hours of the day." But as this is primarily a genre painting, we might also quote a contemporary of Pradilla's (although of a later generation, as he was born in 1868), the painter Ramón Pulido Fernández: "His Italian and Spanish genre paintings have a positive artistic value; they are thought-provoking because they are full of interest and beauty; with great zeal Pradilla sought through them all the enchantments that nature is capable of giving; and there is the psychology of the personages and the surroundings. The Pontine Marshes and the villages of Galicia were a wellspring to his brushes in bozzetti later to become paintings full of extraordinary life and grace. There has been no lack of critics who have denied the presence in Pradilla's works of atmosphere, emotion and other features – which are the result of in-depth research – and that is the most outstanding feature of this painter's works, for he knew like few other painters how to contemplate nature and transfer it to his small and large canvases with fervent devotion." In giving his opinion, Rincón García pointed out that Pradilla must have practised this genre from a personal standpoint which provided his compositions – whether with Spanish or Italian themes – with a fine display of suppleness and grace that filled his canvases and watercolours with unusual, thought-provoking nuances. Furthermore, he did not confine himself to illustrating purely popular anecdotes or simple reflections of domestic scenes, but rather highlighted the spontaneity and naturalism of each by underlining details and paying attention to specific extremes.