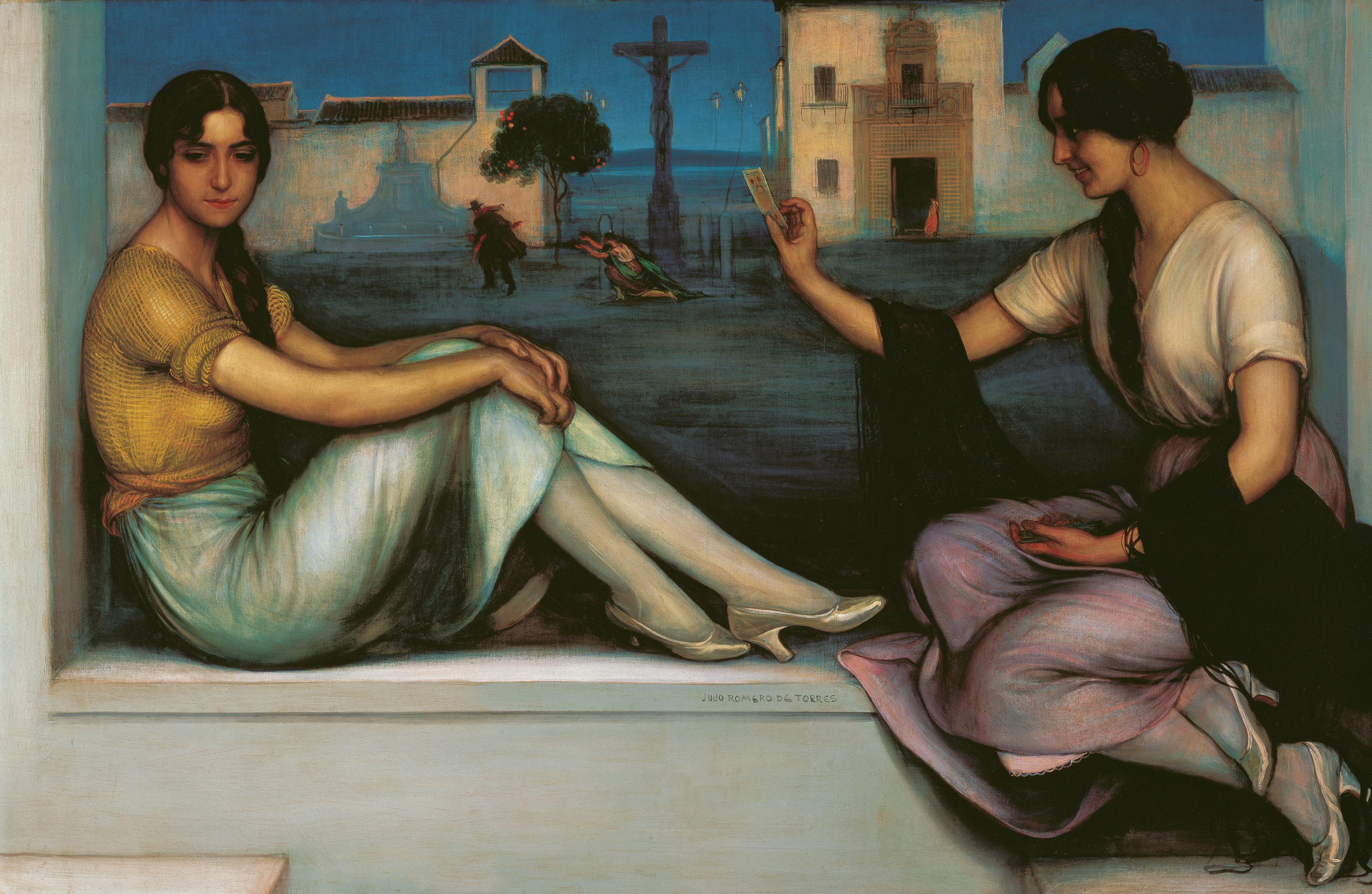 In the wake of his major works of 1908 on, and as he was beginning to win acclaim as a painter, Romero de Torres set out on an unquestionably upward path in the personal and artistic aspects of his life. This "ascent" continued until his death and manifested itself in an interesting sociological phenomenon of adoration from working classes and intellectuals alike, reaching a point where – like few others before him – the painter was identified by everyone through his work.

From the time of that early success, which led to a radical aesthetic change when compared with his previous work (of which this museum possesses a magnificent example in The Cordoba Fair), he remained true to his style and made no concessions to the contemporary movements that had influenced him previously.

1922 saw one of his greatest triumphs in the form of a highly successful exhibition (with which his friend Valle-Inclán had much to do) at the Witcomb Gallery in Buenos Aires. The sale of all the paintings he exhibited (except for two reserved for personal reasons), plus the large number of commissions he received during the months of his stay in the Argentinean capital, and the many tributes which culminated in his appointment as a "favourite son" of Cordoba, all contributed to his ultimate fame and acclaim.

Dating from this period of professional success is The Fortune Telling, painted in Córdoba in 1920, as confirmed by a photograph published in the local newspaper La Voz of 12 September 1920 in which the artist is seen working on the painting. This information rectifies the date traditionally assigned to the painting of 1922, which is based on the fact that it had been in a collection in Argentina and had not been included in the exhibition at the Witcomb Gallery that year, although it was present in another one at the same gallery in 1943.

Sitting on a window ledge are two women in profile of similar protagonism who symbolise the duality so often present in Romero de Torres's paintings. Other examples in this respect are Amor Sagrado y Amor Profano ("Divine Love and Profane Love" – Cajasur Collection, Cordoba), Ángeles and Fuensanta (Museo Julio Romero de Torres, Cordoba) and Humo y azar ("Smoke and Chance" – private collection, Madrid). The young woman on the right, in working-class dress with her legs folded, does not seem able – even by displaying the five of oros (a Spanish playing card) – to attract the attention of her companion, who is leaning back, her obviously melancholy expression suggesting some kind of anxiety over love.

Behind them lies Cordoba, here represented by the house and fountain of La Fuenseca, the Christ of the Lanterns and the Palace of the Marquis of La Fuensanta del Valle, where a woman in a red shawl leans against the doorjamb – a compositional resource used by the artist on several occasions after Lovesick (Cordoba Museum of Fine Arts) of around 1905.

The artist aligned the buildings and monument in a backdrop, caring little that all stand a considerable distance away from one another. This is also the case in the Sketch of the Poem of Cordoba.

In the area between the fortune-telling in the foreground and the landmarks in the background, Romero de Torres again included a sketchy, secondary scene, in which a woman seems to be trying to hold back a man, and clearly connected with the painting's main theme of love, or rather, indifference.

This is a painting whose complicated interpretation might perhaps be summed up by the sadness of a young girl in love with a married man (with the fortune-teller using the five of oros to warn her of the risks involved) whose wife attempts to hold him back in the middle distance but ultimately stands abandoned in the doorway in the background.

An analysis of the composition and theme of The Fortune-telling necessitates a comparison with other paintings by Romero de Torres, which prompts a consideration of the value of the "repetition" in his painting. The first repetition lies in the title itself, as there is in fact another canvas known as The Fortune Telling, painted around 1922 and now in a private collection. The subject is the same although the woman whose fortune is being told is depicted as nude and reclining.

Regarding the composition, the most evident similarity is found in the portrait of Conchita Torres (private collection, Madrid) of around 1919–20, who also sits on a window ledge but on the opposite side. The few differences between the two are limited to the clothes and a facial expression that makes the model look like a painfully lovesick young girl. There is no other main female figure in Conchita Torres but once again the architectural background and the landscape are featured, although the Christ of the Lanterns is absent and the secondary scene has been modified.

The woman on her knees with outspread arms in the secondary scene repeats the posture – although inverted – of a very similar figure painted in 1920 in the upper part of Santa Inés ("St Agnes" – Museo Julio Romero de Torres, Cordoba). This was one of the two paintings the artist did not sell at the Buenos Aires exhibition – despite tempting offers from the Argentinean government – as his mother was very fond of it.

Two women – sitting or leaning back on different bases, friends or foes, blondes or brunettes, bourgeois or peasant girls, mystical or profane, clothed, semi-nude or nude – were to be Romero de Torres's recurrent protagonists. For example, in the poster for the 1916 Cordoba Fair, Musidora (National Museum of Fine Arts, Buenos Aires) and Los celos ("Jealousy" – J. Rodolfo Bernasconi Collection, Buenos Aires), both of 1922, Humo y azar of around 1922–23, Mujeres sobre mantón ("Women on Shawl", Cordoba Museum of Fine Arts) and, of course, The Fortune-telling.

It is obvious that the artist's interest in female iconography never waned. Frequent also during those years were horizontal canvases with two women pleasantly passing the time in one manner or another. Romero de Torres repeated this theme from the early Ángeles and Fuensanta of 1907 to the poster for the 1916 Cordoba Fair as well as Musidora, The Fortune-telling, Mujeres sobre mantón, Humo y azar, Seguiriya gitana ("Gypsy Seguiriya", known for years as Mal de amores – "Lovesick"), Spring, and finally, at the end of his life, in Trini's Granddaughter of 1929.

A reflection of the women's fashion of the time also appears in a number of these paintings, as is seen in the shoes of many of Romero's female figures, the silk stockings suddenly all the rage and so coveted, the modern green or yellow mesh jumpers, or the hairdo, sometimes garçon-style, or in the soft waves and long braids worn by the models immortalised by the Cordovan master.

The pack of cards, despite its very different meaning in this canvas, was a motif repeated in other paintings, including the other The Fortune Telling (ca. 1922), La Sibila de las Alpujarras ("The Sibyl of the Alpujarras" – Museo Julio Romero de Torres, Cordoba) of 1911, Humo y azar, painted in 1923 to decorate the tobacconist's and lottery office on the Calle de Alcalá, Madrid, La carta ("The Letter" – private collection, Madrid) and Cabeza de vieja ("Head of an Old Woman" – Museo Julio Romero de Torres, Cordoba) of 1928. Furthermore, he may have intended to include one in the unfinished Mujeres sobre mantón.

The signature, in capital letters, fully corresponds with Romero's handwriting in his mature period, according to analyses of various of his paintings and posters, including The Cordoba Fair (also in the Museo Carmen Thyssen Málaga Collection).