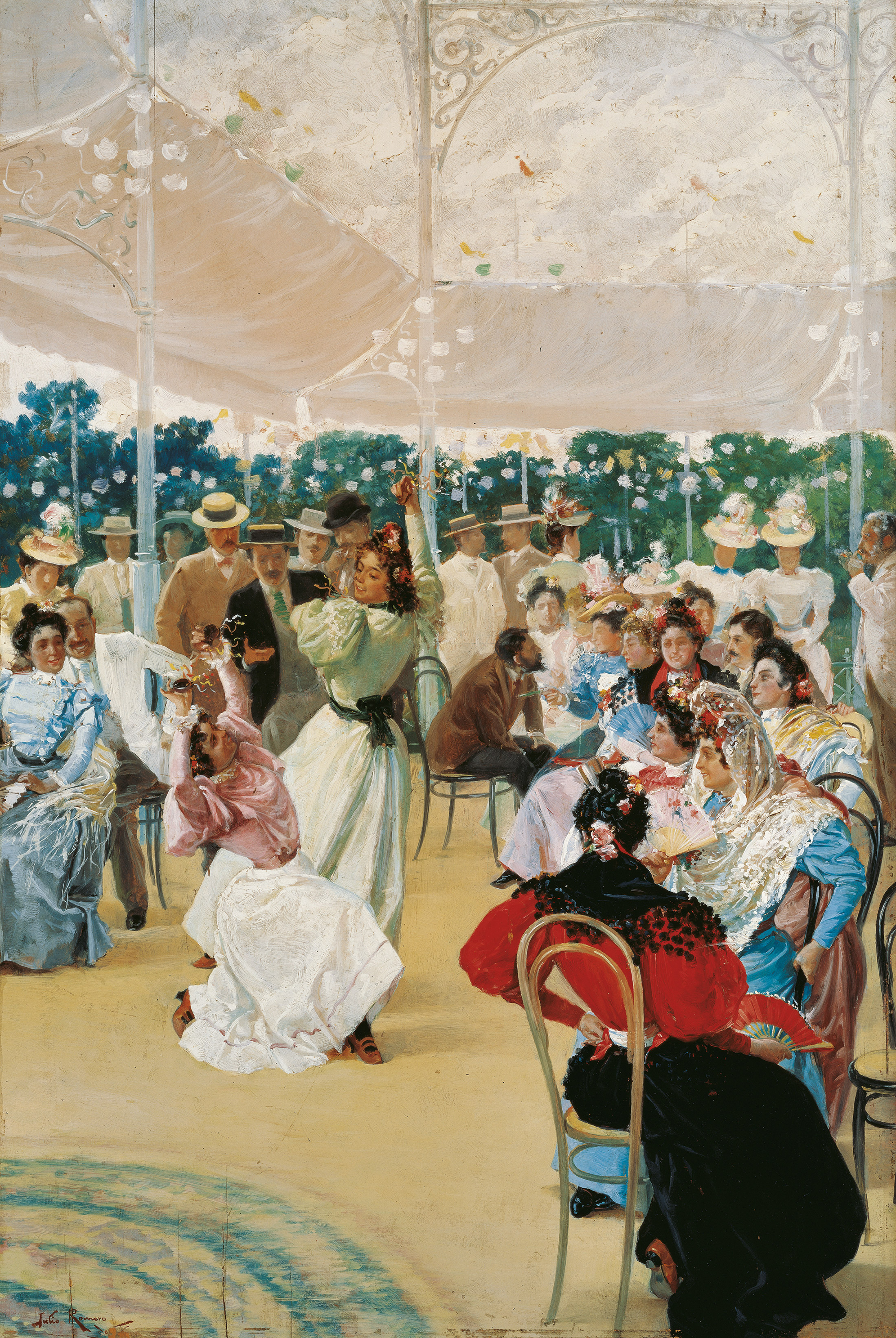 In the time between Julio Romero de Torres's Cabeza de Árabe (“Head of an Arab”, Pellicer Collection, Madrid) of 1889 (the first of his dated pictures, though not the first of his known works) and The Little Coal Girl (Museo Julio Romero de Torres, Cordoba) of 1930, he painted a vast number of pictures. However, during that long period and in the extensive catalogue of his production, not all his paintings gave rise to the same degree of interest.

Traditionally Romero's career has been divided into two stages, differentiated as the conceptual and the aesthetic. In the first, of which until only a few years ago little was known, his painting followed an aesthetic path similar to that taken by his Spanish contemporaries, while in the second – from 1908 – it took on a unique and very personal appearance which made it easy to identify (almost at first sight) as his. With wide-ranging opinions his production from that period has been linked to Symbolism, Modernism and Pre-Raphaelitism.

Both periods reflect a continued interest in depicting the May Fair, held each year in the painter's home town, as can be seen in the large number of posters, watercolours and drawings on the theme dating from between at least 1896 and 1916, as well as his contributions, in the form of illustrations, to the magazine La Feria de Mayo en Córdoba ("The May Fair in Cordoba"). To this can be added this précieux panel acquired for the Carmen Thyssen-Bornemisza Collection in 1997 and now exhibited at the Museo Carmen Thyssen Málaga, which also holds three other interesting works by the Cordovan master: Nun (1911), Sketch of the Poem of Cordoba (c. 1913) and The Fortune-telling (1922).

The Cordoba Fair belongs to what has been called the artist's "first period". At some point it was known from photographs in the Romero de Torres Collection (annexed to the Cordoba Museum of Fine Arts) as Happiness, a title reused by the artist in other, much later paintings, including one dated 1917 now in the Museo Julio Romero de Torres, Cordoba.

A light sketch in pencil of one part of the panel composition that is entitled Happiness (Cordoba Museum of Fine Arts) features a seated man in the foreground with a group of women sitting behind him. All can be clearly compared with figures in The Cordoba Fair.

Half-way between an open-air scene and one with vague suggestions of an architectural structure (the iron frame of the municipal marquee in the old fair enclosure on the Paseo de la Victoria in Cordoba) the scene set here by the painter contains a feature of Andalusian fairs invariably found even today – dancing.

Romero de Torres centres part of his composition around the figures of two graceful women dancing under the temporary iron structure of the marquee with its brilliant white bright canopies or "sails". The background of vegetation forms a green horizon punctuated with small white, hardly distinguishable circles forming the strings of Chinese lanterns that light up the enclosure. The attention to detail of some foreground features, such as fans, madrone trees and flowers or the texture of fabrics, contrasts with the sketchiness of the figures in the background, whose faces – as the distance increases – have not even been outlined but are instead only suggested by delicate dabs of colour.

Light and colour were two of the artist's greatest preoccupations during those years. In this picture, the light is intense, its effect seen in the gradation of the different whites delicately applied to the canopies and clouds or the clothing of some of the figures. The red of the blouse of the woman in the chair in the foreground and the blues and greens of the dresses and the tree-lined area place Romero de Torres among the most outstanding painters of his time, including those who, like Sorolla, reflected in their canvases and panels a strongly transcendent intensity of colour – from which the Cordovan master would draw ever further away in his second period.

Various dates have been suggested for The Cordoba Fair. The first, provided by José María Palencia upon analysing the faint preparatory drawing, places it at around 1897, i.e. within the 1895–1900 limit cited at the 1997 auction, although some catalogues of more recent exhibitions displaying the painting have delayed its execution until 1903.

Technical and aesthetic analysis of the painting allow it to be dated at around 1900, since it has certain similarities with The Nap (private collection, Cordoba), dated 1900, Andalusian Laziness (Cordoba Museum of Fine Arts), A la amiga (“To the Lady Friend”, Oviedo, Masaveu Collection) and Bendición Sánchez (Cordoba Museum of Fine Arts), all painted between 1900 and 1905 and displaying the painter's interest in and treatment of light and colour. The dating of The Cordoba Fair could therefore be appropriately restricted to the time limit 1899–1900, making it completely different from Conciencia tranquila (“Clear Conscience”, Asturias Museum of Fine Arts, Oviedo) of only two years before (1897).

Those final years of the century were crucial to Julio Romero de Torres's artistic and personal development. It was a time when his paintings received their first important acknowledgements through prizes for Look how Pretty She Was (Museo Julio Romero de Torres, Cordoba) of 1895, and the above-mentioned Conciencia tranquila of 1897. Triumphs which coincided with milestones in his life, for they were marked by the deaths of his father and his brother Rafael, the refusal of a grant to study in Rome, his marriage, the birth of his first children and the beginning of his teaching career.

Like the concept and aesthetics of the Cordovan master's paintings, there are two clearly-defined periods in the structure and spelling of his signature. In the first, he signed his name in lowercase letters, which present slight variations from his early, teenage works and developed logically in the spelling and appearance of the forename and surnames. A second point was subsequently reached, after which the painter used robust capital letters to sign most of his mature works – those now commonly identified with his name.

Nevertheless, analysis of the signature on this painting fails to provide a more precise date, since the spelling and structure are identical to those in paintings such as Conciencia tranquila of 1897 and Lovesick (Cordoba Museum of Fine Arts), which is believed to date from around 1905.