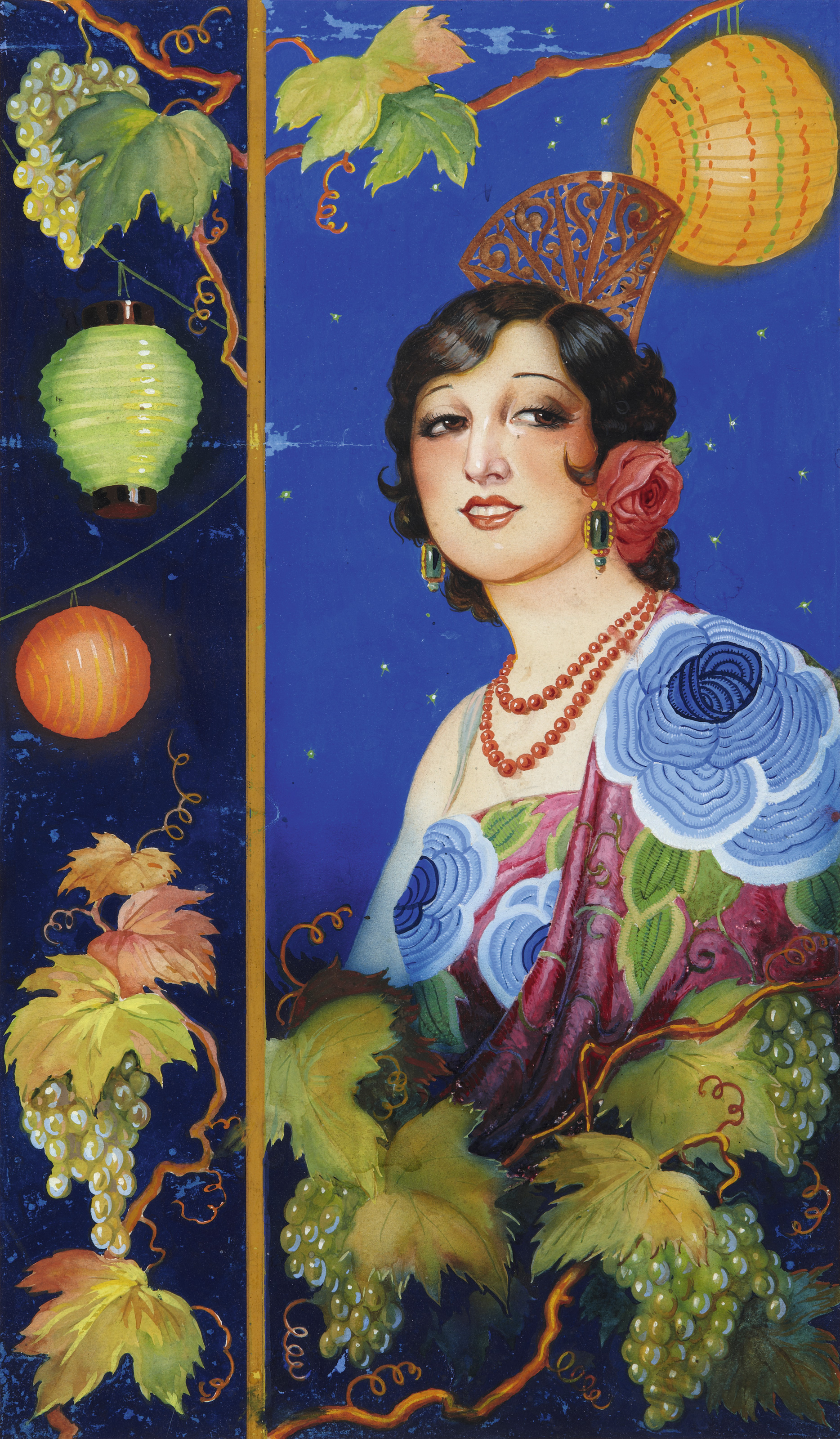 The illustrative character of this work, particularly where iconographic content is concerned, might lead one to think of it as a preparatory study – and a highly defined one at that – for a fiesta poster or similar. Indeed, the Chinese lanterns so typical of local celebrations, the female figure richly dressed as the emblematic, indisputable queen of the event and, in this case, the thick clusters of grapes – iconographic motifs which always allude to some specific occasion, product or place – express that character of a picture intended to convey a graphic message. Other elements typical in the depiction of the solitary female figure, such as the comb or peineta the hairstyle, the make-up – especially in the painting of the lips – or the double-strand coral necklace around her neck, and even the look of the hanging lanterns, make it possible to date this picture between the second half of the 1920s and the early 1930s – coinciding with dates in the life of this artist about whom so little is in fact known.As regards poster design documentation, cases of thick-beaded necklaces, lanterns of this kind and openwork peineta or combs like the one worn by the girl are often found in posters dating from between 1920 and 1930. However, for the other adornments, such as the earrings, painted lips and hairstyle – the last two 1920s-style, particularly in depictions of the female figure – dating is not so precise. On the other hand, the (embroidered silk?) shawl in which Izquierdo has dressed the figure does present certain difficulties in relation to the dates stated above, unless of course we take “artistic licence”, seeking first and foremost a sharp contrast between design and colour into account;otherwise the shawl would seem to correspond with a previous date.

All of these iconographic elements, as well as the design and posture of the figure in space, plus the use of and contrast between the background inks and the realism of certain details, particularly the adornments – the peineta the necklace and earrings – place the work clearly within the realm of the poster. The prominent, detailed presence of the thick bunches of grapes (rendered here with a realism akin to still-life) with their leaves and vines framing the composition, suggest that this may be a sketch for a fiesta poster or for an ad hoc industry in the cities of Malaga or Almeria. An enduring iconographic motif and always an important feature in the poster imagery of those two Spanish cities, the bunches of grapes are also at the heart of this work by Ramón José Izquierdo y Garrido who was, let us not forget, of Andalusian origin.