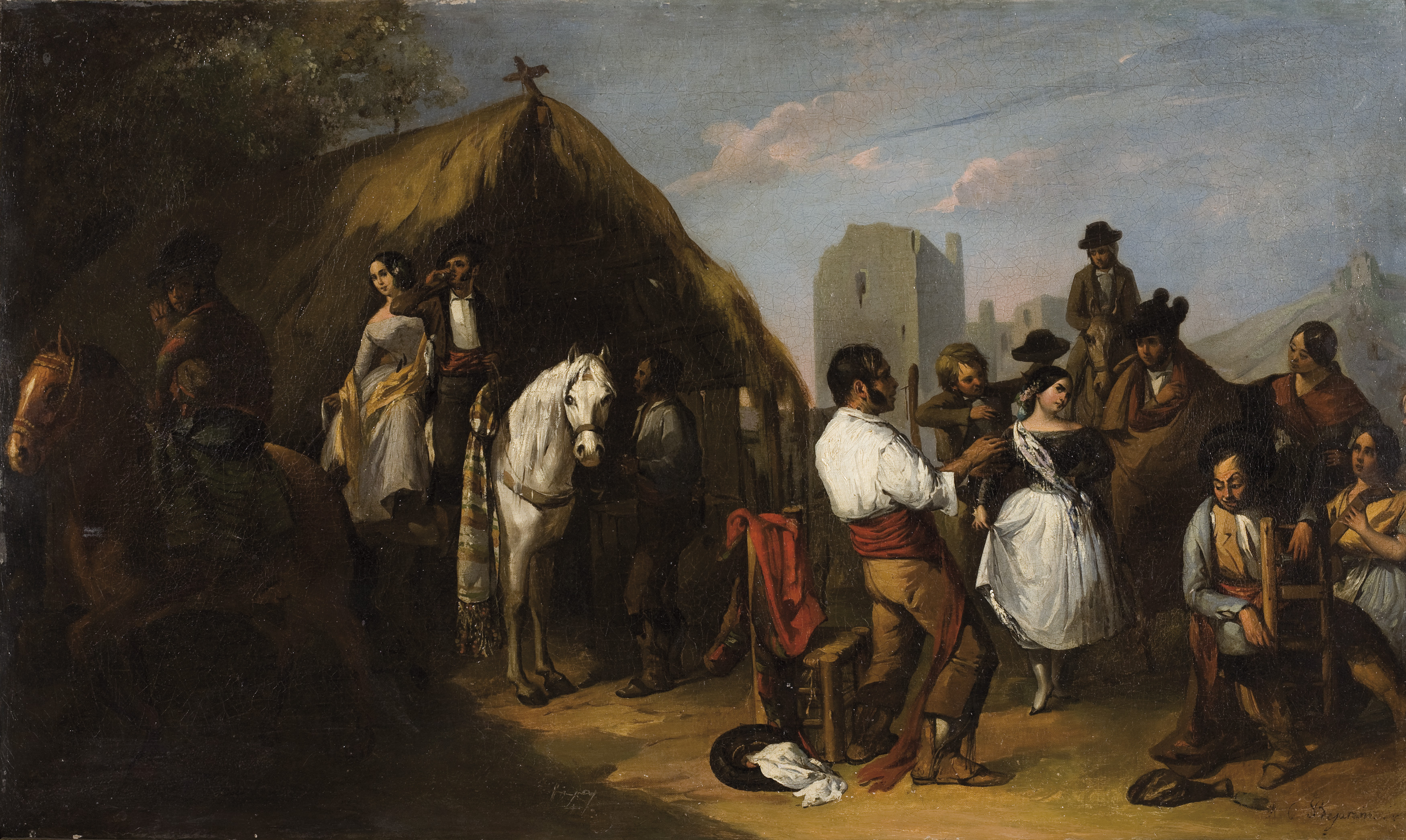 On the Outskirts of Seville

The intense vitality of the Seville working classes in the mid-19th century served as inspiration for the local painters, who produced many genre works depicting in detail the habits and customs of the folk of the lower social orders.

This painting shows an everyday scene at the city's points of entry and exit, where taverns catered for those who halted to rest and regain their strength after a long journey on horseback or farmers and market gardeners who worked the large areas of arable land around the city.

The proximity of the city is suggested in the background, where a tower and a length of city wall are visible. The scene is set at a spot close to Seville in front of a thatched wooden hut serving food and drink (the latter to quench the thirst of the passers-by and clear the dust of the road from their parched throats).

Thus the main characters in this painting are horsemen and passers-by. The figures on the left do not dismount but drink from horseback.

Some of the other figures do not seem to be in such a hurry, as for example the group of seven on the right who have formed a circle with chairs and are singing and dancing. One girl plays a guitar while another dances a few steps as the men cheer her on.

In the arrangement of this scene, Benjumea skilfully managed the contrast of attitudes and expressions by counterbalancing the static left side with the dynamic right side and the atmosphere of rest and relaxation with that of merriment and activity. Furthermore, just as the painter contrasted the attitudes of the two groups that form the composition, he created two clearly differentiated areas of light, for the left-hand side is in shadow, reinforcing the sense of peace and quiet, while the other side is brightly lit to highlight the intense expressive motion of the figures.

Although not exceptional, the colours used by the artist in this painting are also well-balanced, especially in the alternating tones of the garments of the figures with a predominance of white and red amid more muted and uniform shades. The clear blue of the sky in the background also serves to underline a benevolence of nature in which the good working-class folk give themselves up to rest and recreation.

As regards the painting's technical characteristics, Benjumea used a technique more typical of drawing in the style of Joaquín Domínguez Bécquer, who was somewhat older than him and influenced many other artists of the time. Benjumea certainly tailored Domínguez Bécquer's style to his own expressive characteristics, with the result that his figures have a distinct personality of their own and are relatively easy to distinguish. This work also included a number of characters who appear in other paintings, as for example in Dance at a country inn, also in the Carmen Thyssen Collection.

Recent research has led us to information from Rafael Benjumea’s descendants which we have been able to confirm through documentation. The artist's exact dates of birth and death were previously unknown but we can now confirm that he was baptized in the parish church of El Sagrario in Seville on 21st July 1825 and died in Madrid on 16th March 1888.

On the Outskirts of Seville