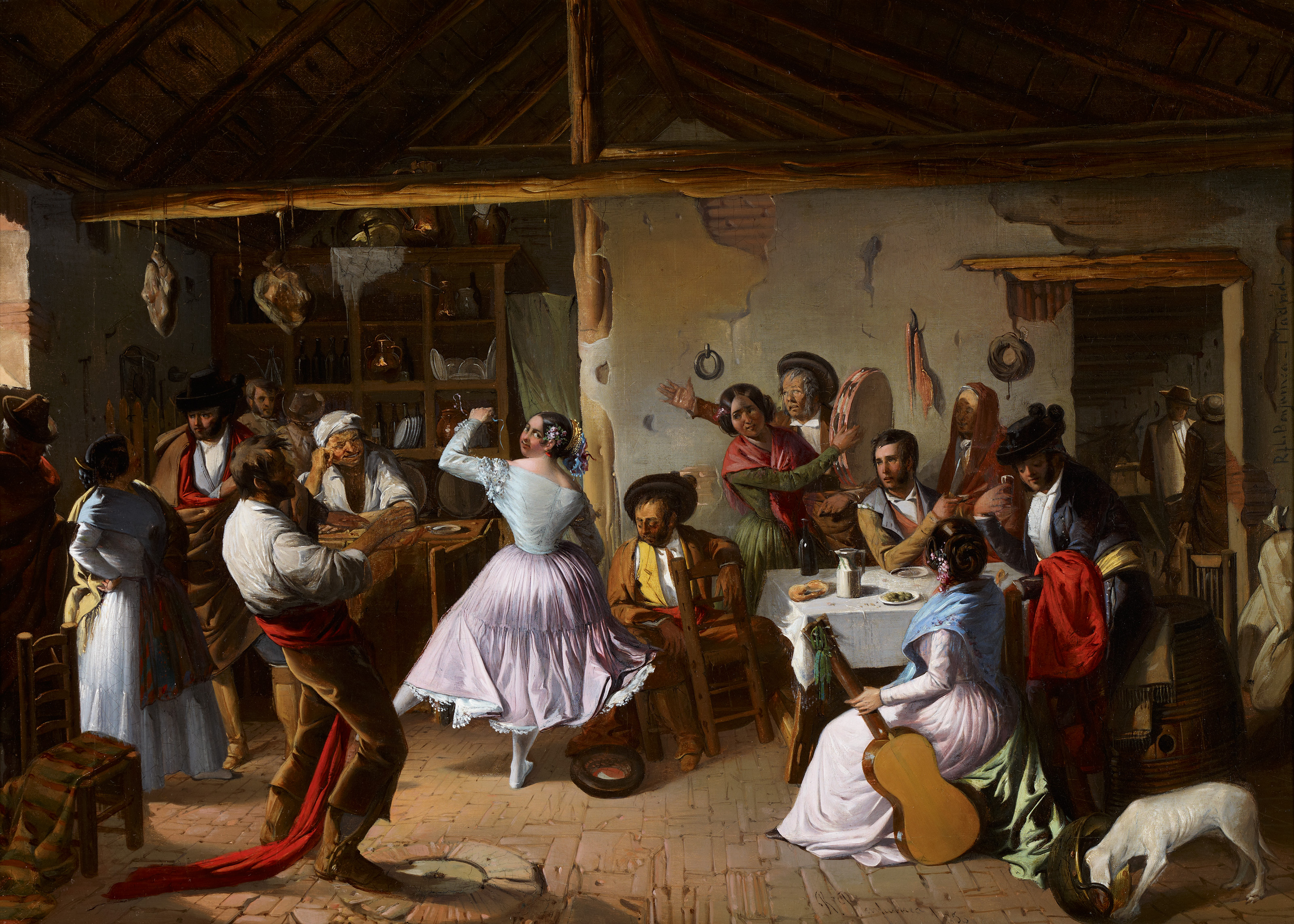 Dance at a Country Inn

Inside a humble country inn, a young woman dances to the sound of her castanets and the tambourine played by another woman, cheered by the many people present. Meanwhile, a guitar strummer has interrupted her playing to talk to a traveller seated next to her. The dancer’s costume and striking headdress indicate that she is probably a travelling artiste who performs at various inns, accompanied by the other two women. From the central beam hang two shoulders of ham, and at the far end is a dresser containing various pots and dishes.

Painted in 1850 soon after Benjumea arrived in Madrid, this canvas is a magnificent example of one of the most interesting yet least appreciated facets of the Sevillian painter, who is chiefly known for his portraits of rather middling quality and spectacular scenes of court ceremonies. However, Benjumea’s true artistic personality comes to the fore in picturesque scenes of this type depicting Andalusian customs with an evident folk flavour and appeal which flooded the art market during the middle decades of the 19th century and in which some of the most prominent Andalusian Romantic artists established themselves.

Given its early date, this painting in a sense hails Benjumea, along with Manuel Cabral Aguado Bejarano (1827–91), as one of the pioneers of works of this kind that would be painted by other artists such as the Bécquer family and another Sevillian, Manuel Rodríguez de Guzmán (1818–67), who indisputably became the greatest master of scenes of everyday life in Sevillian painting of his day. The present painting by Benjumea precisely recalls many of the features of the most personal style of this master, such as the corporeal nature of the figures, who are fully modelled and very emphatically drawn, the vividness of the colours and, above all, the descriptive detail with which both the figures and each and every one of the ancillary elements of the composition are portrayed, thereby emphasising its picturesque flavour and anecdotal content. Indeed, from the minuteness of detail with which the different human types and their costumes are rendered to details such as the pots and pans on the dresser, the paving stones and the drain on the floor, the adornments worn by the women in their hair, the shadow of the ring on the wall and the dealers who converse in the dark room at the far end, everything is handled exquisitely by the artist, who displays particular skill in the more anecdotal details such as the carefree attitudes of some of the figures, the roguish and satisfied gesture of the innkeeper standing behind the counter and the hungry-looking hound that sticks its muzzle in a bowl to lick up the leftovers. In his mastery of spatial arrangement and handling of the light that streams through the small window on the left and creates dramatic backlighting effects – such as the figure of the woman with hands on hips who watches the dancing – Benjumea succeeds in masking certain flaws in the drawing that are particularly noticeable in some faces such as that of the main dancer, whose head is turned rather unnaturally to gaze at the spectator.

As Piñanes suggests, this picture could be one of the three of Andalusian customs Benjumea entered in the annual exhibition of the San Fernando Academy of Fine Arts in Madrid that year, 1850.

The National Museum of Fine Arts in Havana owns a simplified version of this composition with variations, in which the figure of the dancer is different and the setting becomes an outdoor space.

Dance at a Country Inn