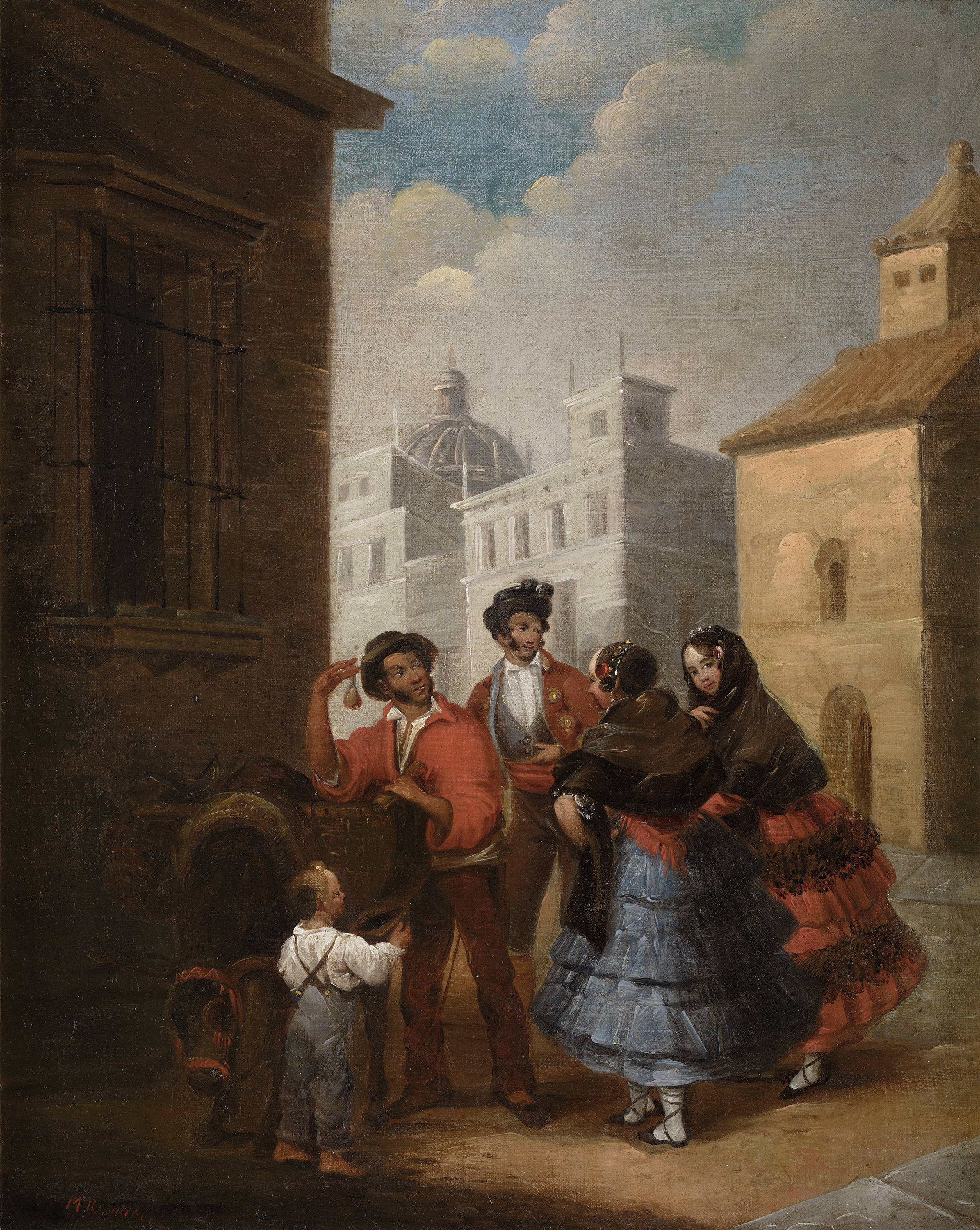 At the San Isidro Fair

Two men, two women and a child beside a donkey that almost blends into the shadowy architectural mass on the left-hand side form a rather stationary group with little action. The boy, who is barefoot and in shirt sleeves, holds out a bag to collect the proceeds of the deal. Meanwhile, one of the men has taken some castanets out of his saddlebag and holds them up, trying to sell them to the two young women, one of whom exchanges a knowing glance with the spectator; this gesture inevitably makes us observers of the scene. The other man, elegantly attired and clearly the companion of the ladies, who are equally well dressed, looks on passively. The colours of the clothing are sumptuous, ranging from red to blue with a few brownish tones as in the luxurious jacket of the male escort. Unlike the depictions of fairs and pilgrimages that the painter captured with great skill in other works featuring crowds of people at annual festivities celebrated with open air eating, dancing and singing and drinks served in makeshift taverns, the theme here is not one of revelry.

On the contrary, this is a genre scene but one that is more everyday and trivial and set in an urban landscape whose buildings do not allow it to be accurately identified: the illuminated part reproduces generic constructions of the day (of the 1860s, Méndez specifies) and only the dome and the earth-coloured building on the right with the appearance of a house of La Mancha (despite the fanciful horseshoe arch) appear to be intended as references. If so, the dome, despite its striking ribs, would appear to be a free rendering of the church of San Francisco el Grande in Madrid; this location is reinforced by the house built in the typical style of the Castile-La Mancha region, of which examples remained in the Austrias district of Madrid. Furthermore, the painting also displays what Valdivieso described as the “free-and-easy technique reminiscent of Goya, owing perhaps to the artist’s contact with Eugenio Lucas, although the influence has also been suggested of another Madrid enthusiast of Goya’s style, Leonardo Alenza, who is quoted as being a friend of his. Precisely Alenza’s death in 1845 has led Méndez to suspect that the Sevillian-born Rodríguez de Guzmán had come into contact with Madrid earlier, before his first trip to the capital in 1852, although he temporarily returned to Seville in 1853. The work therefore dates from after 1853, the year he moved permanently from Seville to Madrid, and it could even be held to belong to the group of paintings with an Andalusian atmosphere that he is reported as having carried on painting in the capital.

Méndez, who nevertheless does not hesitate to classify the painting as belonging to those of Madrid customs the painter produced following his trip to the capital, adds that the fair of San Isidro was one of his favourite scenes, and that here the usual landscape of his paintings is replaced with a view of the streets and buildings of Madrid of the 1860s.

At the San Isidro Fair