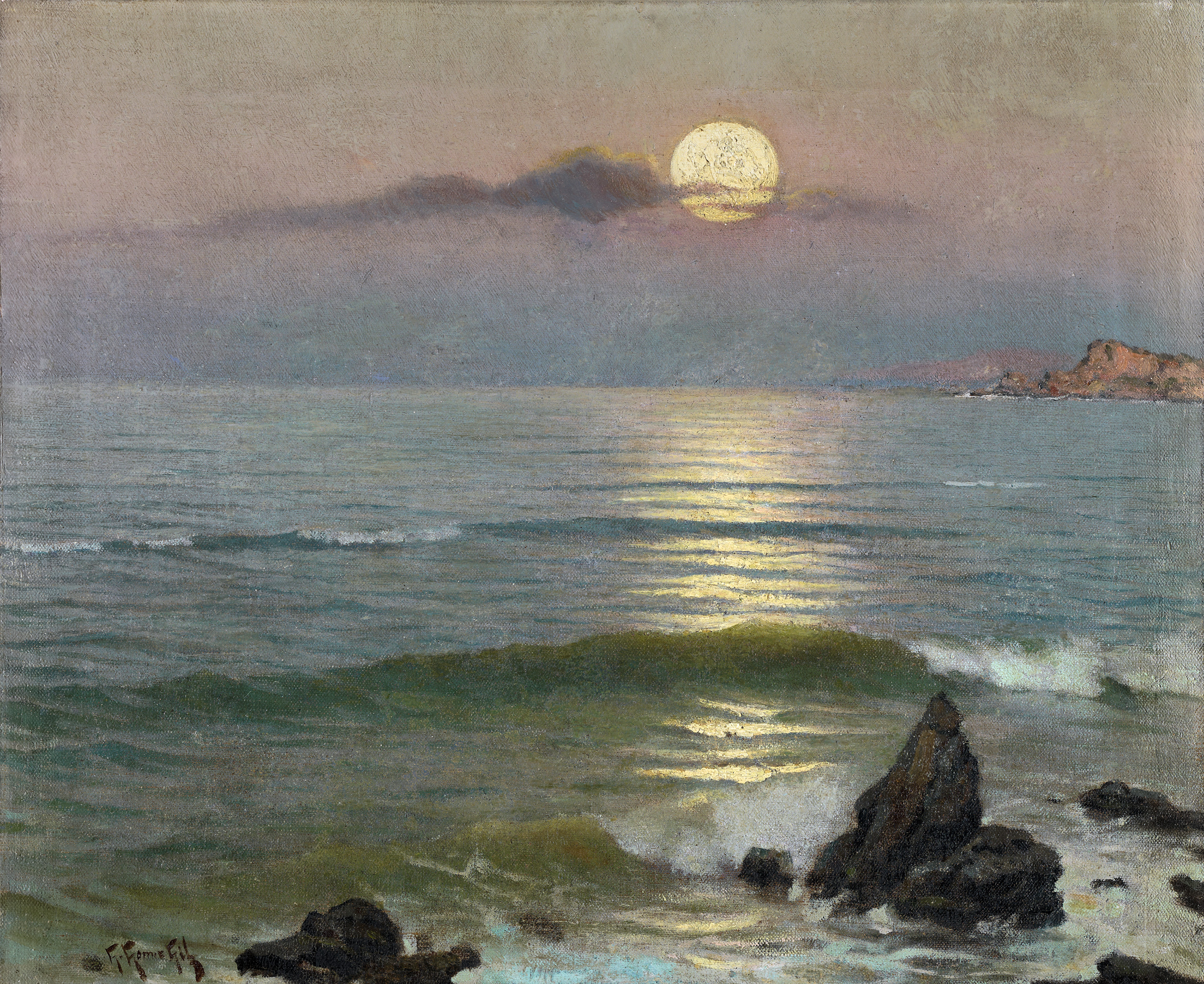 There came a time in Guillermo Gómez Gil's career when, secure in the knowledge of having achieved acceptance with his personal manner of interpreting landscapes, he very conveniently adopted a work method that was easily implemented, yielded excellent results and, with variations, would bring spectacular returns.

This method consisted of painting seascapes based on variations in light. Viewed from the shore at a low angle, here the sea stretches away in its immensity and the gaze glances off a normally calm surface, the only motion being the gentle waves gently lapping at that shore. Two-thirds from the bottom, the horizon divides the scene into two areas with contrasting tonalities: the lower part is dominated by sea greens and the upper by a sky generally tinged with warm reds announcing a sunset or – as in the case in hand – a dawn.

Sometimes a coastline served as an invitation to identify the view. On other occasions – as with this painting – the coastline is absent and suggested only by a shore with a few rocks.

Despite his insistence on repeating the same basic pictures with a few variations, these "seascapes" of Gómez Gil's are not without personality, for the painter managed to make each one unique by choosing a different time of day to capture the light. In this way his paintings always displayed personal nuances and details distinguishing each from the rest.

Without a doubt, Gómez Gil never gave up expressing himself through the languages of modernity, despite the influence of commercial possibilities. In fact, with his reiteration of themes, it is tempting to regard him as a painter swayed by the market, like Modesto Urgell or Meifrén, to cite two painters whose attitudes to aesthetics – and practicalities – were comparable to his own.

Indeed, as an expression of the modernist spirituality of the turn of the century, his poetic depictions based on colour and certain specific light conditions were an exercise in Neo-Romanticism. Likewise, almost tangible is an association with fin-de-siècle realism which insisted, as a posture of modernity, on not manipulating the spectator by recording only what the artist’s eyes perceived.

Combining realism with idealism via that wisely-chosen marriage of the direct transmission of forms and the "poetisation" of tones – thanks to which reality transcends the plane of the perceived and the imagined – Gómez Gil partook of a form of symbolist poetics not so far removed from Pre-Raphaelite trends in Catalonia during those years. Finally, a certain inclination to fragment the brushstroke, however subtly, belies support for the tendency in fin-de-siècle modernity to exalt details in order to create a state of mind. This may well link up with the idea that understanding the subjectivity of colour and the interpretation of emotions can be derived from a landscape – in this case a seascape – which for Symbolists of the end of the century like Azorín was synonymous with modernity.

Whatever the case, this Dawn – which may be dated within the second decade of the 20th century – is an example of the varying attitudes of Spanish painters towards European modernity.

Moonlight, is among those works by Gómez Gil whose principal concern is poetic theatricality. It belongs to a certain category of paintings with titles like Sunset, Effect of the Moon, A Squall and Setting Sun, which became standard and were repeated over and over again at national and provincial exhibitions, and underlined the artist's interest in the dramatic potential of light reflected by the sea. In these pictures terra firma was little more than a reference, while the true theme was the sea and the light shining on it, to the extent that the technique came down to a process with the brush daubing the pigment on thickly in small areas to increase the materiality of the surface and create an impression of vitality. The idea behind the looseness of the paintbrush was to suggest an aesthetic method in which the pictorial surface is liberated and in conjunction with colour becomes the only element to construct the work. This new method falls short when associated with the heaviness of the effect applied to it with the interplay of tones, thus confining its interpretation to commercial and conservative parameters, although the work nevertheless retains its interest.

Standardisation is also evident in the use of compositional blueprints: the coast and horizon delimit the upper section; the sea, distorted by the reflection of the light (in this case from the moon) is the painting's point of attraction and the feature establishing a hierarchy within it; and the breaker with foam and rocks defines the lower limit in a manner that is repeated almost without variation in the rest of the artist's prolific production. The commercial nature of this work is also reflected in the measurements: scarcely half a metre to a side. Through this picture Guillermo Gómez Gil takes his place in the Spanish landscape painting of the late 19th century, a genre which can be associated with movements of renewal but along less volatile and programmatic lines. It is a worthy representative of a space that welcomed the appearance of the new but without the inconvenience of a break with tradition.