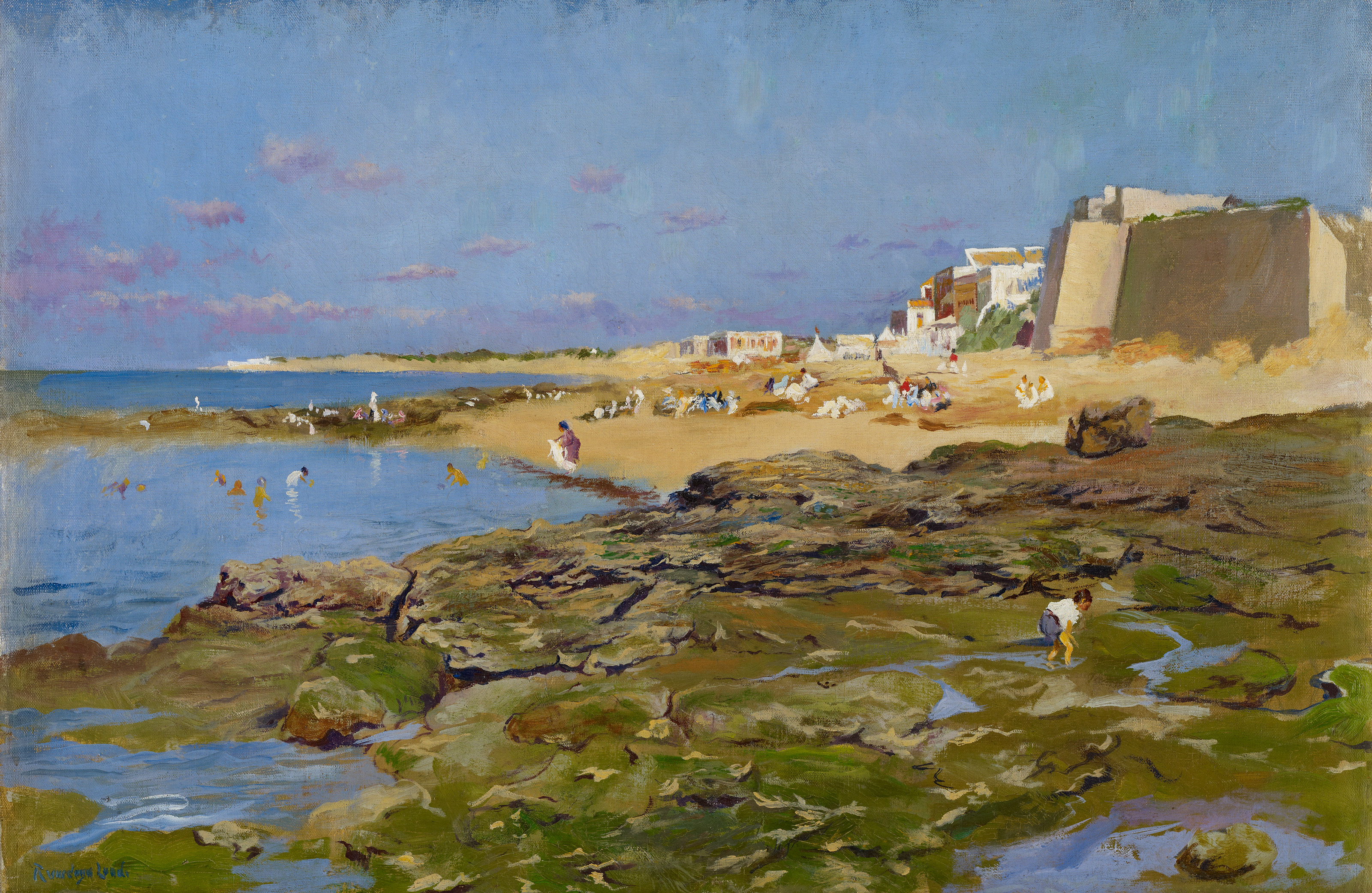 Looking for Shells on the Beach

Marine painting in Malaga was a thematic category which ultimately became a school thanks to the teaching of Emilio Ocón. Today we speak of the Malaga School of marine painters in its own right, for its members managed to draw together a number of common characteristics which unified their styles.

Of all those painters (after Emilio Ocón), it was José Gartner and Ricardo Verdugo Landi who made the strongest commitment to the interests of the modern painting of the time. Without a doubt, it was the latter who best understood the concerns of the intellectual modernity of his age and who delved deepest into the onset of the Spanish landscape tragedy drawing on the resources provided by Spain's sea and coastlines in particular.

Verdugo Landi's marine paintings tend to focus on the sea and its coastline (the more violent and dramatic the better) but the painter did not reject the idea of relating other more pleasant stories, including sea-going vessels or activities, in them.

This painting belongs to that second category. It is a delectable bozzetto of a beach and the strong walls of a fortress, a strategic point of defence of the coast, which testifies to the local population's dependence on it.

What on other occasions might be a dramatic resource becomes a platform for a festive story about rest and recreation. I am referring to the rocky strata on the beach, which here does not represent an aggressive landscape but allows everyday activities such as looking for shellfish or children at play to be recorded. The figures on the sand also illustrate a social activity which had been gaining ground in Spain since the turn of the century, i.e. going to the seaside or summer holidaying – thus making this painting a testimony to a social situation and cultural circumstances in which leisure and well-being were pursued as exercises in progress and modernity.

As regards technique, here the artist focused on lightness, acting with a great deal of spontaneity and freshness. He also displayed a capacity for direct observation and producing a work of interpretive immediacy.

If it were not for the size of the canvas, we might think that this is a bozzetto from nature – painting for painting's sake – and yet the measurements suggest some other purpose: that of following the modern line in painting which did not adhere to too many rules and sought to focus the interest on the effects of light and the potential of thick impasto. These results were achieved by using a technique based on small, vigorous brushstrokes to apply large amounts of impasto to achieve accurate renderings.

The painting's discourse is in fact one of atmosphere and light, of the immediacy of the recorded, of the power of colour and constructive spots, all taking priority over the anecdotes featured within that space, i.e. those centred around the figures in the picture or the purely physical ones that determine the personality of the territory.

The thematic and technical characteristics of the painting might suggest that Ricardo Verdugo Landi was following a dependence on Valencian or Catalan models (particularly the former). Here the artist's approach was less localist and influenced much more by a trend in landscape painting practised by "Mediterranean" painters at the beginning of the 20th century. However, that "Mediterraneanness" pursues lighter, more commercially-orientated goals in this work, although a certain commitment to modernity is apparent.

Looking for Shells on the Beach