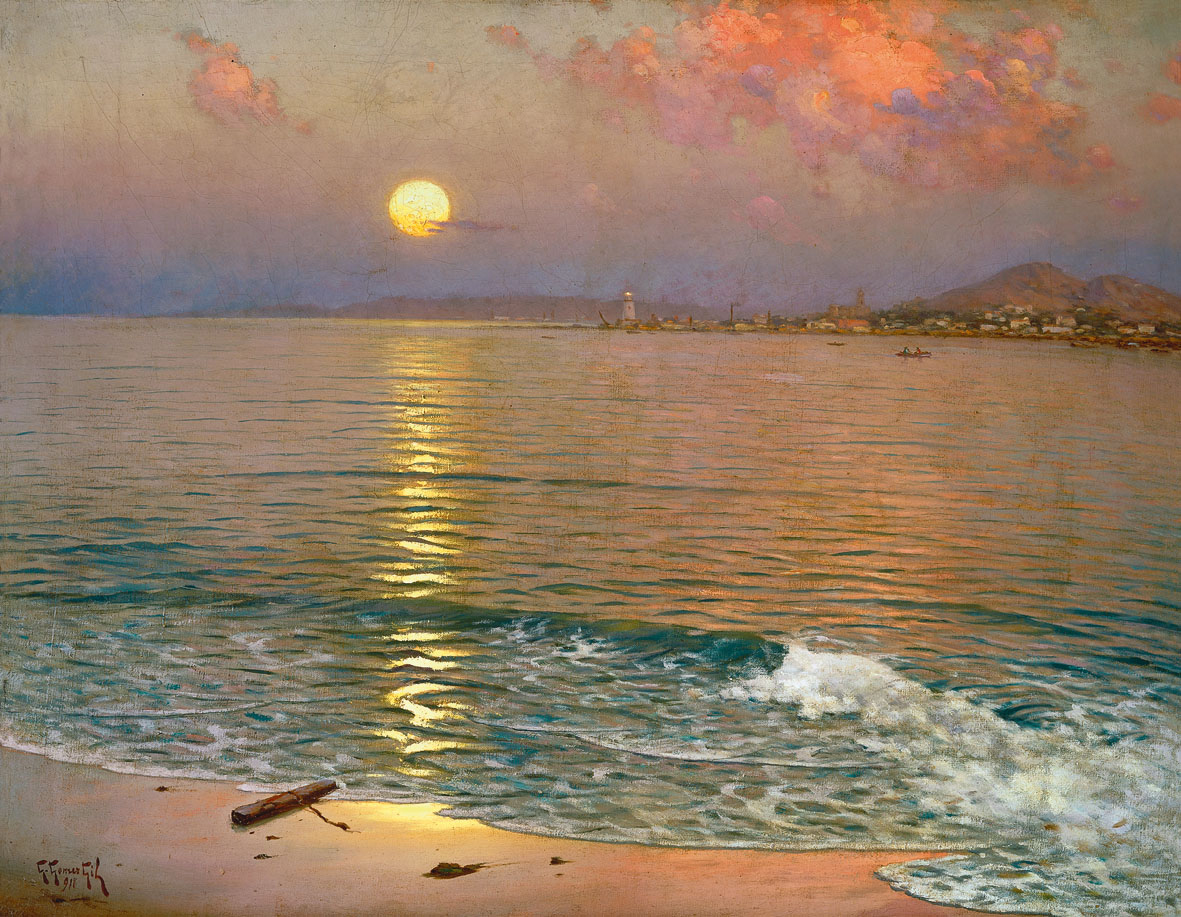 Dusk over the Coast of Málaga

At the turn of the 20th century, painting sea scenes was synonymous with interest in the purely formal values of painting. The movement of the water, the reflection of the light on the waves, the diversity of green and blue tones and the light present in a painting due to the reflection of sky on water were all factors which painters whose only wish was to capture nature by direct observation could not ignore. This meant that the production of some artists who specialised in that genre came to consist entirely of seascapes.

Such was the case of Guillermo Gómez Gil, who began painting seascapes early in his career. Indeed, in 1880, when scarcely eighteen years old, he won a prize for a seascape at an exhibition organised by the Malaga City Council. From then on he decided to specialise in this genre, at first under the wing of Emilio Ocón and later with the Mediterranean landscape painters with whom he came into contact in Madrid. In this respect, Cecilio Pla was among those who may have influenced him most, for at the end of his career Gómez Gil painted with open strokes similar to those of the Valencian artist.

Influence of this kind led Guillermo Gómez Gil's training to develop two aspects in his treatment of landscapes, both within commercial requirements, although involving no loss of dignity or quality. The first was his use of light for its dramatic aspects, but in terms of an affirmation of the poetic and the literary, as an element at the service of a perception of art that views painting as a vehicle of expression for the inner emotions and experiences. The second aspect had supposedly more scientific positivist links which sought to establish a relationship between man and nature and whose purpose was to explore the knowledge of both in order to define their essences. This line was to take him closer to a more clinical record of nature, although one equally charged with intentions.

In the case of the first oil, Gómez Gil associated with the centre of painting in Malaga, where the influence of de Haes, Ocón and later Muñoz Degrain would lead to the development of a landscape style in which realism was essential – although so too was the application to it of a whole range of compensatory compositional, chromatic and narrative factors which in a certain manner distorted the basic tenets of the movement.

With the second painting, Gómez Gil sought a line related to another expression of modernity, i.e. one in search of a form of painting capable of capturing the essence of all things Spanish, while at the same time employing a technical treatment based on the truth of the immediate and devoid of speculation – as approval of the sincerity of a work's programmatic content. This line is also tangibly present in the Malaga landscape due to its close relationships with institutionalism and especially with Giner de los Ríos and the group of Malaga intellectuals associated with him. However, when we look closely to see how Gómez Gil approached this option technically, most evident in his work is the influence of Madrid and the landscape painters who lived there – especially Aureliano de Beruete.

Also noteworthy in Gómez Gil's work is the spirit of commercialisation and standardisation in his approach to the genre. The basis of many of his seascapes was a set design with coastal or horizon backgrounds and minimal tonal variations. Gómez Gil was also quite capable of situating identical objects in the same places and in the same positions, yet surprisingly making them appear different. This was due to the power he infused into the elements of nature, the sky and the sea – which usually met in an embrace in the illuminated, warm tones of dawns and dusks.

Such is the case of the seascape entitled Dusk over the Coast of Malaga, that contains personal references, as the background is the coast of Malaga bay. The city can be identified from the lighthouse, the cathedral and the 19th-century factory chimneys. It is similar to another version in a private Malaga collection which also features the sea, a wave lapping the shore, a rope tied to a log washed up on the beach and a piece of seaweed on the sand. It differs, however, in that there is no city in the background and the low sun is half-obscured by clouds. All of this indicates that the painter worked within fixed compositional designs, which he modified to endow each seascape with differences. However, under no circumstances can this process be attributed to that attitude of modernity whereby realist painters were invited to approach nature with the intention of working directly upon it and regarding it as a subject capable of transmitting messages either poetic or of pure objectivity.

Dusk over the Coast of Málaga