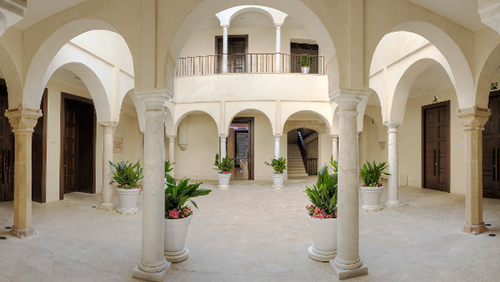 In addition to the importance of the contents - the Carmen Thyssen Collection of Spanish and Andalusian painting from the 19th and early 20th centuries - can be added the significance of the building that houses the Museum: an outstanding architectural site where the historic structures, restored to create the new museum, stand alongside the modern architecture of the structures specially designed to complete the museum installations. The Museum can thus be seen as a unified and harmonious whole with each element maintaining its own distinct personality.

In parallel, the work carried out to create the Museum (undertaken by the firm of architects RG+ASOCIADOS and entirely funded by the City Council of Malaga) has also highlighted the area of the city in which it is located, which is of outstanding importance with regard to 16th-century Renaissance architecture in Malaga, built over the Roman city within the old Moorish quarter.

The most important of the historic structures that make up the Museum's installations is the Palacio de Villalón, a late 15th century - early 16th century noble home, reformed and enlarged in the 18th century by the Villalón family, whose name it takes. Situated in Calle Compañía, the building underwent changes to ownership and use during the 19th century which led to various alterations - the most traumatic being the modifications carried out in the 1960s when attempts to make it conform to a more modern aesthetic concealed many of the building’s historical elements. This means that various procedures were required during the recent restoration in order to recover the palace's original spatial harmony. On the basis of the preliminary studies undertaken, it was decided to restore the palace by returning it to its original layout. This involved reinstating the interior courtyard by rebuilding the lost west façade; replacing the concealed or dismantled arcading with its marble columns; rebuilding the gallery on the first floor on the basis of the remains that were discovered and through reference to similar buildings of the period; restoring the interior doorway of Renaissance style that was rediscovered in the gallery on the ground floor; restoring the mullioned window over the staircase and the original façades, and finally reconstructing the original entrance doorway, which is also Renaissance in date, above which is found the heraldic shield of the former owners, with, among others, the Villalón coat of arms in the upper left.

This newly restored Renaissance doorway marks the entrance to the palace, which is itself notable for its elaborate carved wooden ceilings and the framework of tracery in its principal rooms. The palace is arranged over two floors around a central courtyard with arcaded, columned galleries and a second courtyard that includes part of an old fortified wall. This element acts as the base for the tower of the church of Santo Cristo de la Salud, which is now visually integrated into the Museum following the removal of buildings that concealed it from view. Also restored were a small tower, the façade of which had been hidden for more than a century by the adjoining building, and a rare architectural element in the form of a first floor room that acts as a link between two buildings and which was typical of medieval architecture. The restoration of this element not only emphasises its historical importance and serves to frame the street below; it is also an articulating element between the Museum’s exhibition spaces and its administrative and service areas.

The new buildings that adjoin the palace deploy a sober, restrained contemporary idiom. Designed to house the exhibition galleries, their crisp, volumetric forms are structured into three rooms that house the Permanent Collection and others for temporary exhibitions. Among the restored historical structures is a unique example of Malaga’s Baroque architecture, now adjoining the new buildings. This is the headquarters of the Fundación Palacio Villalón, which is responsible for the overall management of the Museum.

However, this new addition to the history of Malaga in the form of the Museo Carmen Thyssen Málaga goes beyond the restoration of the above-mentioned buildings and extends back to the very origins of the city. The archaeological remains of a Roman villa were found on the land now occupied by the Museum. This was made up of sleeping and domestic quarters, as well as an almadraba (factory for salting fish) with origins dating to the 1st century AD and which remained in use with successive changes until the 5th century. Highlights of the site include a monumental fountain, perhaps a nymphaeum, with its pictorial mural decoration.

Overall, the Museum covers a total area of 7,147 square metres, of which 5,185 are for display purposes, divided between the galleries for the Permanent Collection (located on the ground, first and second floors) and the temporary exhibition galleries on the third floor. In addition, 612 square metres are occupied by the Fundación Palacio Villalón, and 1,350 square metres are for administrative use and for the Museum’s various services and facilities, including the educational space, the auditorium, the gift shop and the cafeteria.

The Museum can thus be described as responding to various different, conceptual and formal dimensions: firstly, to the decision to emphasise the importance of the palace itself, which has acquired the status of a museum in its own right; secondly, to the dialogue that has been established between the new spaces that house the works of art and those designed for administrative purposes; and finally, to the fact that the unique views and perspectives that present themselves during a visit to the Museum open up the history of Malaga itself to the visitor, while the incorporation of the archaeological discoveries into the building give access to the very origins of the city.