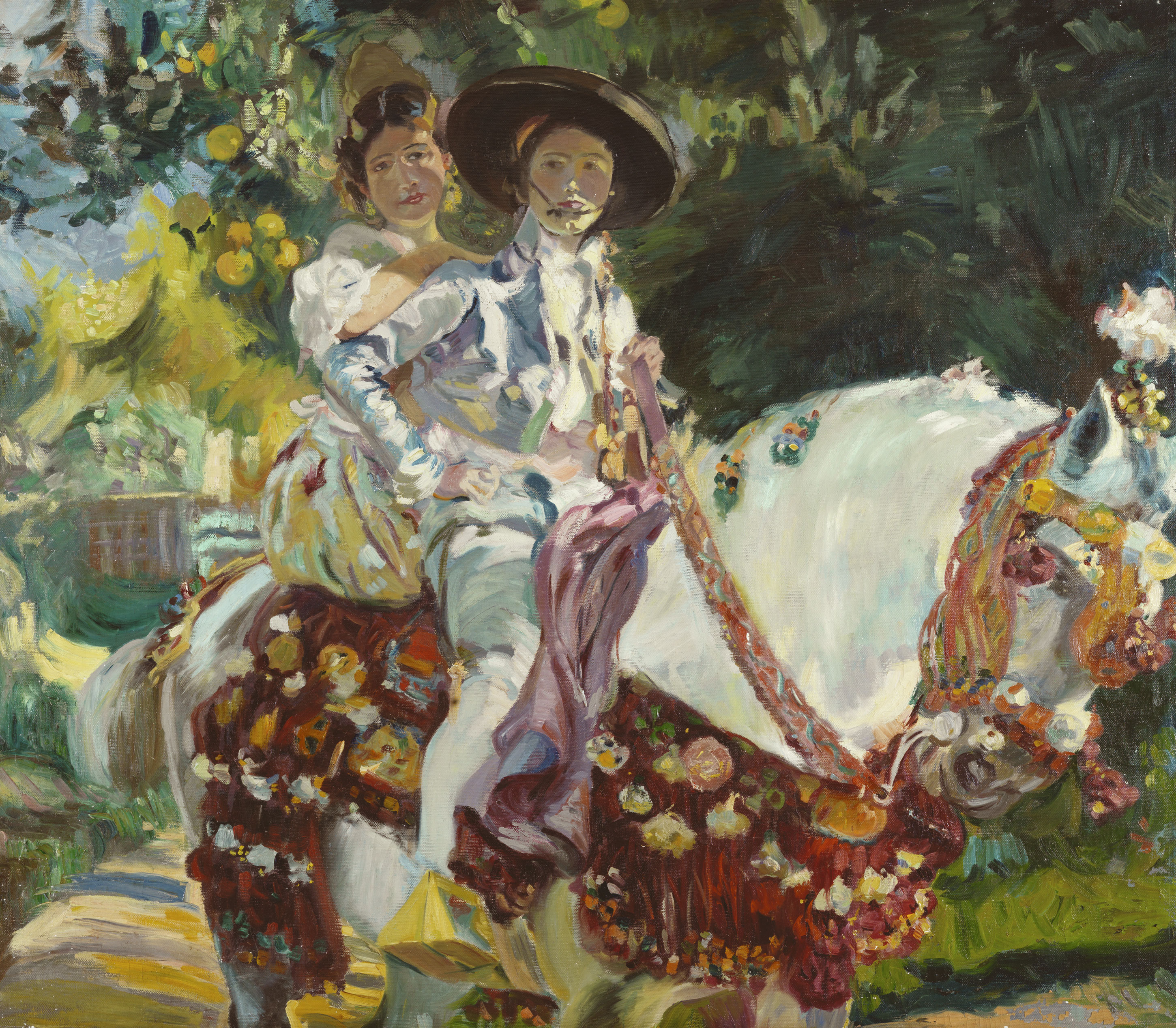 Julio Vila y Prades (1873–1930) trained as an artist at the San Carlos Academy in his hometown of Valencia under Joaquín Agrasot, Juan Peyró and Francisco Domingo Marquis, and in 1893 went to Madrid to study at Joaquín Sorolla's workshop. A tireless traveller, he lived in numerous cities in Spain, Europe and the Americas, became famous in his lifetime and received numerous awards. Vila y Prades was a great muralist and landscape painter and an excellent portraitist. He also practised genre and regionalist painting, finding both interesting for their figures and popular themes.

After a long absence from Spain, he returned to Madrid in 1907 and subsequently to his native Valencia due to his mother's ill-health; after her death, he left for Buenos Aires. It is very likely that during a short stay in Madrid in 1908 he based Valencians on Portraits of Elena and Maria wearing Old Valencian Dresses (1908) by his master Joaquín Sorolla. Sorolla had previously painted several works on this theme with a similar composition, including Valencians on Horseback (1906). Vila y Prades felt a strong attraction for regionalist painting and possibly decided to paint a version of his own of his master's daughters.

Vila y Prades's Valencians is smaller in size than Sorolla's painting, as it concentrates only on the girls and the horse's upper quarters. He depicted Sorolla's daughters together on horseback in typical 19th-century Valencian regional costumes. In the foreground, the girl holding the reins wears typical men's clothing and a rodina or round black hat (held in place by a strap under the chin), a jupa (or long-sleeved jacket) over a shirt, knee-length trousers and white footwear. Behind her, the second girl is dressed in typical women's wear. Noteworthy is her traditional Valencian hairstyle (monyo) with the decorative hair comb (pinta) and eye-catching earrings. She also wears a plain white blouse and a colourful skirt (guardapiés). The head and haunches of the white horse are bedecked with tassels and materials of vivid colours.

The figures are situated in a typically Mediterranean landscape replete with fruit trees providing leafy vegetation, while in the background stands what looks like a country-style house. The painter's delight in details can be seen in the painstaking rendering of the orange tree just behind the two figures on horseback.

As Vila y Prades's pictorial technique is identical to that of his master Sorolla, there is virtually no difference between this and the original work. Light is of utmost importance in this painting, as it floods the scene, and the sunlight shining through the trees adds even more brilliance to the vivid colours of the girls' clothing. The artist used a palette of bright colours – orange, red, yellow and blue – which stand out against the dark green background of vegetation. Julio Vila y Prades was an artist who developed the whole range of pictorial registers and this was not the first time he had painted this archetype of regionalist themes, having already produced various posters featuring Valencian fairs. He also produced a number of regionalist-style works during his stay in Valencia, including Los arroceros ("The Rice Growers", 1907), which won second prize at the Exposición Nacional, and Caravana gitana ("Gypsy Caravan") also of 1907. There is no doubt that Vila y Prades developed his own style, but the influence of his master Sorolla's themes, luminarism and use of colour are to be found throughout his production. Furthermore, as one of his contemporaries once said, "He was one disciple of Sorolla's who definitely left his master satisfied."