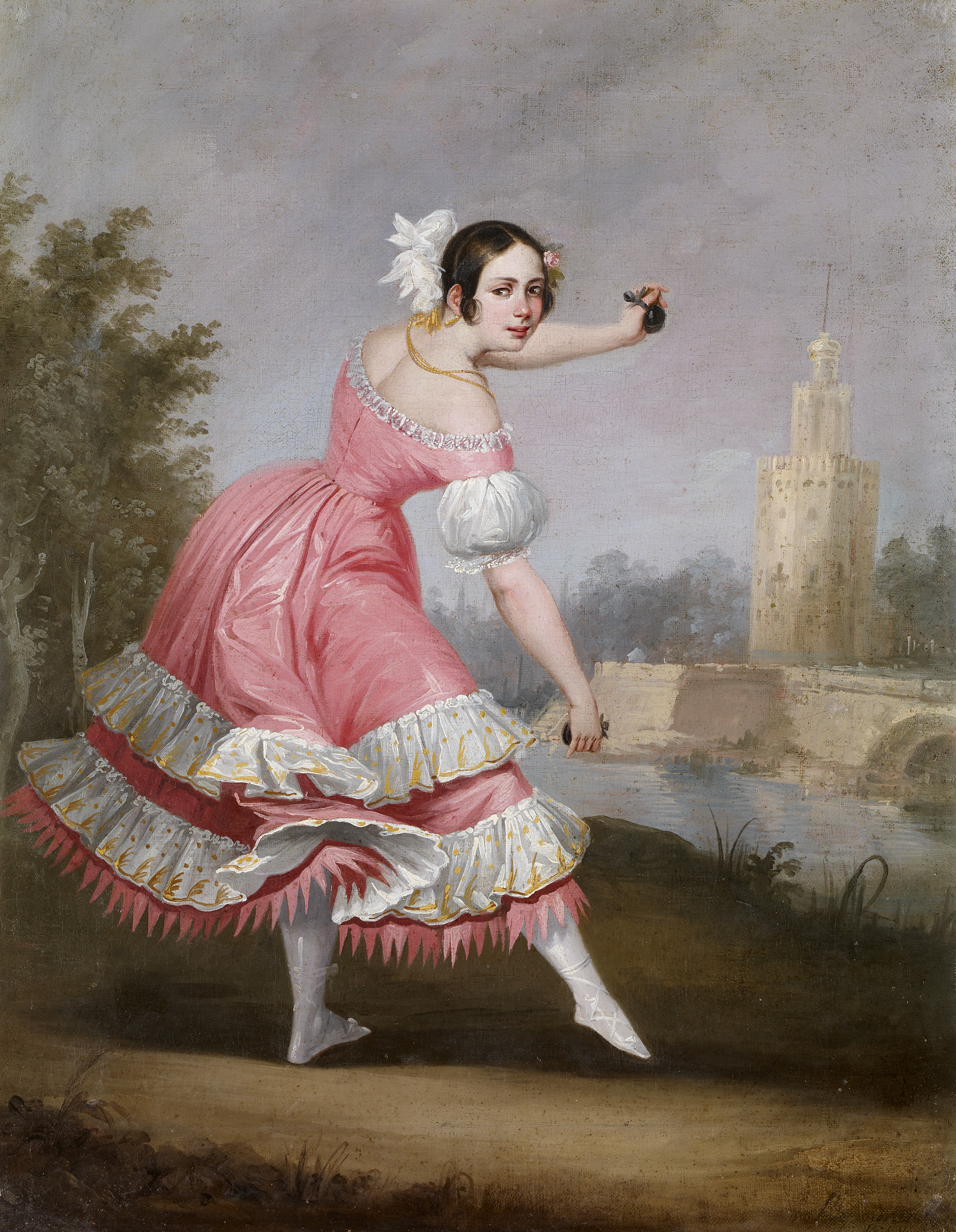 On the banks of the river Guadalquivir, in Seville’s riverside district of Triana opposite the Arenal and the Torre del Oro, which are clearly visible in the background, a girl dances and plays the castanets. Dressed in the typical costume of bolero dancers, identified by the cut, pointed hem and ruffles of the dress and by the demi-pointe shoes that were used solely for dancing, she performs a typical dance step with castanets. The composition, in which the dancer is depicted opposite one of Seville’s main landmarks, is significant as it combines the most appealing aspects of the city in the first half of the 19th century – its fascinating Arab ruins and ancient buildings – with the bolero, which from the Romantic Age onwards became one of the most successful dances performed in theatres across Europe, identified clearly with Spain and, initially, with Andalusia.

One of the attractions of the bolero was how difficult it was to perform, as it required not only legs and arms to move in rhythm – like those of the dancer in the picture – but also involved the movement of the trunk and the handling of the castanets simultaneously. As a result few dancers included it in their repertoires and it was practically beyond the abilities of amateurs. The Romantics who travelled around Andalusia often stressed that it was impossible to convey the excitement of watching these dances being performed in a spontaneous way in the city of Seville, one of the most recognised centres of bolero dancing from the early 19th century. They often stressed that Andalusian women were best at them and the dance was soon identified with the region, becoming one of its distinguishing features and main tourist attractions.

“It gives the French, English, Italians and all the nations of Europe pleasure to see the bolero danced. They all learn it and few come to perform it moderately well”, wrote one of the most famous authors of treatises on the choreology of the bolero in 1820, the master Antonio Cairón, referring to the dance performed by the girl in this picture. It is possible that the particular piece being performed by this dancer is the one known as the “Olé” or the “Olé de la Curra”, as it matches the depiction of this step in various engravings of the period illustrating the first figure in this dance. At the time dancers of European fame, such as Fanny Essler and Pauline Duvernay – the latter for the dance known as “La Cachucha” – had achieved extraordinary prestige and even had their own iconographies. In general, these pictures featured their most famous performances and in order to identify them they were always shown performing the same step of a bolero, which became popular above all through prints. In addition, the bolero was commonly represented in pictures similar to those in the Thyssen Collection, which always focused on the most complex and elegant position of the dancer executing this particular figure that was so easy to identify.

It is therefore not surprising that an iconography like that shown in this painting should have been repeated on several occasions given its valuable significance as a well-established image of Sevillian identity and also the commercial success it must have enjoyed. Indeed, three versions of this composition are known to date. The finest is the one housed in the Palacio de Liria in Seville, which until only recently was also thought to be by Antonio Cabral Bejarano,5 like the rest, but is now ascribed – although the reasons for the change of attribution have not been explained – to his son Manuel. It displays very slight variations with respect to the present work and its clear, crisp execution and particularly vivid colouring, especially in the sky, have led to the assumption that it is the first in the series of these paintings, or at least the most accomplished version of those known. In addition, the work in that collection is the only one that preserves its companion piece showing a man dancing a bolero before a backdrop in which Seville cathedral and the Giralda can be made out. However, the work in the Carmen Thyssen Collection is of greater quality than the one formerly preserved in the Bosch Collection and also held to be by Antonio, which is the version of least artistic interest. The Thyssen painting, executed for certain by Antonio Cabral, displays certain exquisite painterly details that set it apart from the Bosch version. In this painting the artist takes the liberty of varying certain features of the figure, giving it an individual quality compared to the other two, such as the position of the dancer’s necklace, in which the strands are separated, and the rendering of the swirling flounces of her skirt and the background foliage in very supple brushwork. The similarity of these three versions – whose composition ties in with those of the collections of human types which were already circulating in prints and of which wash versions were made – does not necessarily indicate that they were executed at the same time. It is most likely evidence of the functioning of the family-run painters’ studios active in Seville in the 19th century: eager to satisfy the incipient market for pictures for foreigners, they continued to use the best compositions for a long time that was always determined by demand. The painters of the Cabral Bejarano family must have repeated their compositions, perhaps sometimes using tracings of some of the most characteristic figures in great depth of detail, and would have fully met the demand for repetitions of the works that enjoyed the greatest commercial success.