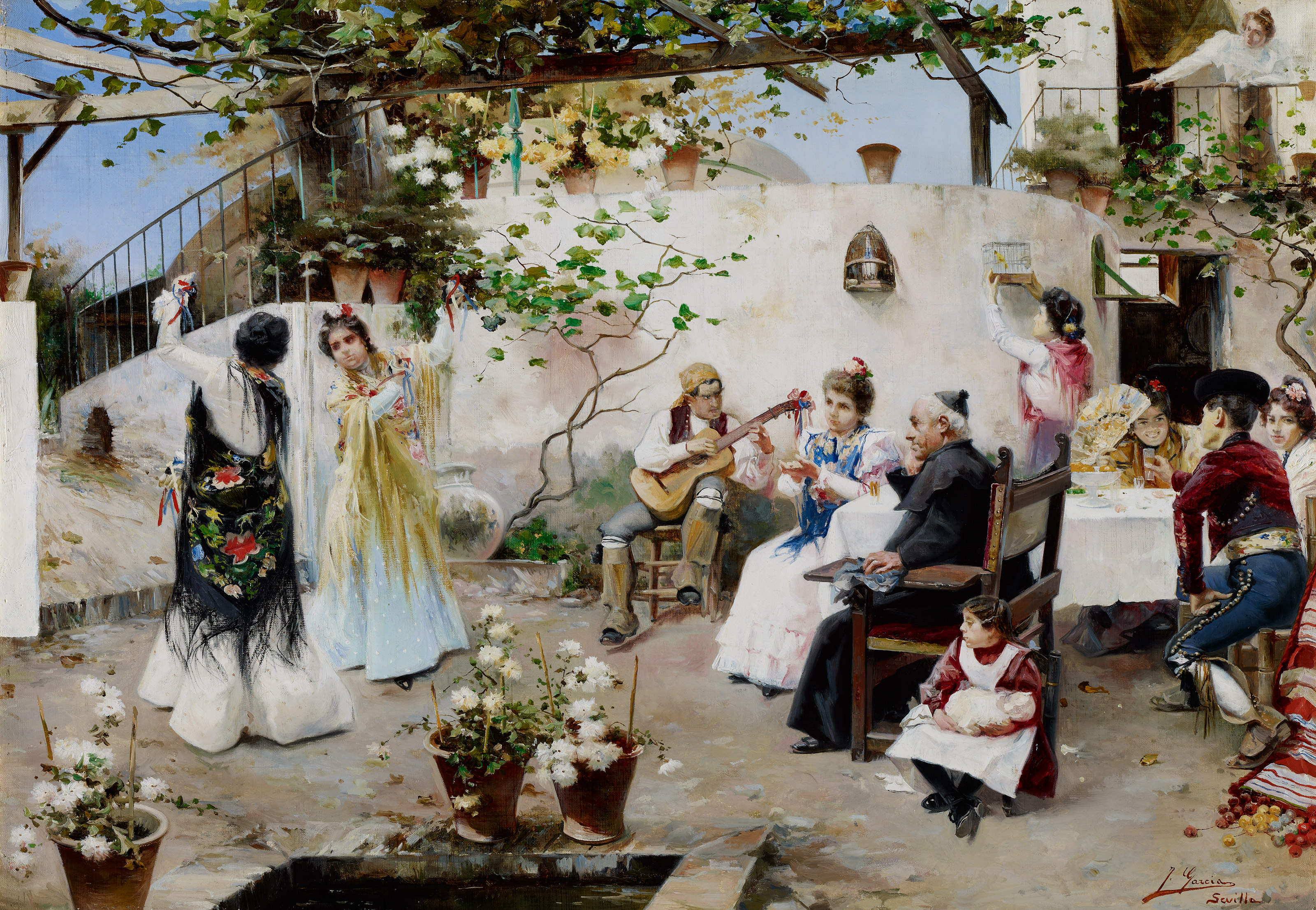 A Dance for the Priest

Beneath the trained grapevine in the courtyard of a Sevillian country house, two young women wrapped in shawls dance to guitar music and hand-clapping to honour the visit of an elderly priest who watches them with pleasure, seated in an armchair. Behind him a young woman, shielding herself from the sun and people’s gazes with her fan, smiles flirtatiously at the compliment paid to her by the boy sitting opposite her, who toasts to her with a glass of Manzanilla sherry; both are oblivious to the bustle and the other women moving about the house. A bored-looking, neatly dressed little girl sitting by the priest’s chair and holding a doll on her lap stares at the dancers with a total lack of interest.

Acquired on the Madrid art market as a work by José García Ramos, this work is in fact another example of the stylistic mimicry of his brother, Juan García Ramos, a faithful imitator of the aesthetic language and models of José, in whose shadow he painted and lived during his entire life. Indeed, at first sight both the prototypes and canon of the figures belong to the well-known style of José; in fact, some reproduce his human models almost literally, such as the dancers and the young man dressed in the traditional short jacket and hat with conical crown and upturned brim so often found in the Andalusian scenes of this Andalusian artist. A careful study of this painting, however, reveals a more sparing technique both in the drawing – the features of some faces are vaguely defined – and above all in the application of the paint, which is rather flat and thin and barely succeeds in modelling the volume of figures and objects, giving them the appearance almost of an illustration, without the usual suppleness that characterises José’s style even in his most insignificant works. What is more, certain flaws of perspective, which are easily visible in objects such as the railing in the background, the vase at the foot of the vine and the flowerpots and pond in the foreground evidence Juan’s limitations. His identity is confirmed by the handwriting of the signature. Nevertheless, the painting displays a certain technical refinement in details such as the gleam of the girl’s and the priest’s shoes, the reflection of the white tablecloth that illuminates the face of the girl with the fan and the sheen of the vine leaves, as well as a painstaking descriptive interest in other features such as the knapsacks trimmed with ball fringe and the horseman’s striking costume.

The painting is devised with a striking theatricality and the different spaces and vanishing points have a pronounced horizontal emphasis; the artist pays particular attention to the features with greatest local flavour and skilfully frames the figures with the architecture, situating them practically on the same plane. This structure is common in many scenes of this kind painted by José and is also employed by his brother in other very similar scenes, such as the one entitled Una tarde de primavera (“A Spring Afternoon”).

Even so, the painting holds an obvious appeal and its colours and decorative flavour are perfectly suited to the purpose of genre scenes of this type, among which private gatherings in courtyards and inns, usually for some celebration, are particularly common as subject matter.1 In this case the pretext appears to be the clergyman’s visit, a fairly common theme in Spanish genre painting of the second half of the 19th century both in these picturesque paintings full of local colour and in the so-called “dress coat” paintings portraying elegant amorous scenes, almost always tinged with a critical anticlerical irony, which here is fairly mild and innocent. In this connection we cannot find any features to explain the title Después del bautizo (“After the Baptism”) with which it was sold, as it does not seem possible that the doll held by the little girl could have been mistaken for a new-born baby.

A Dance for the Priest