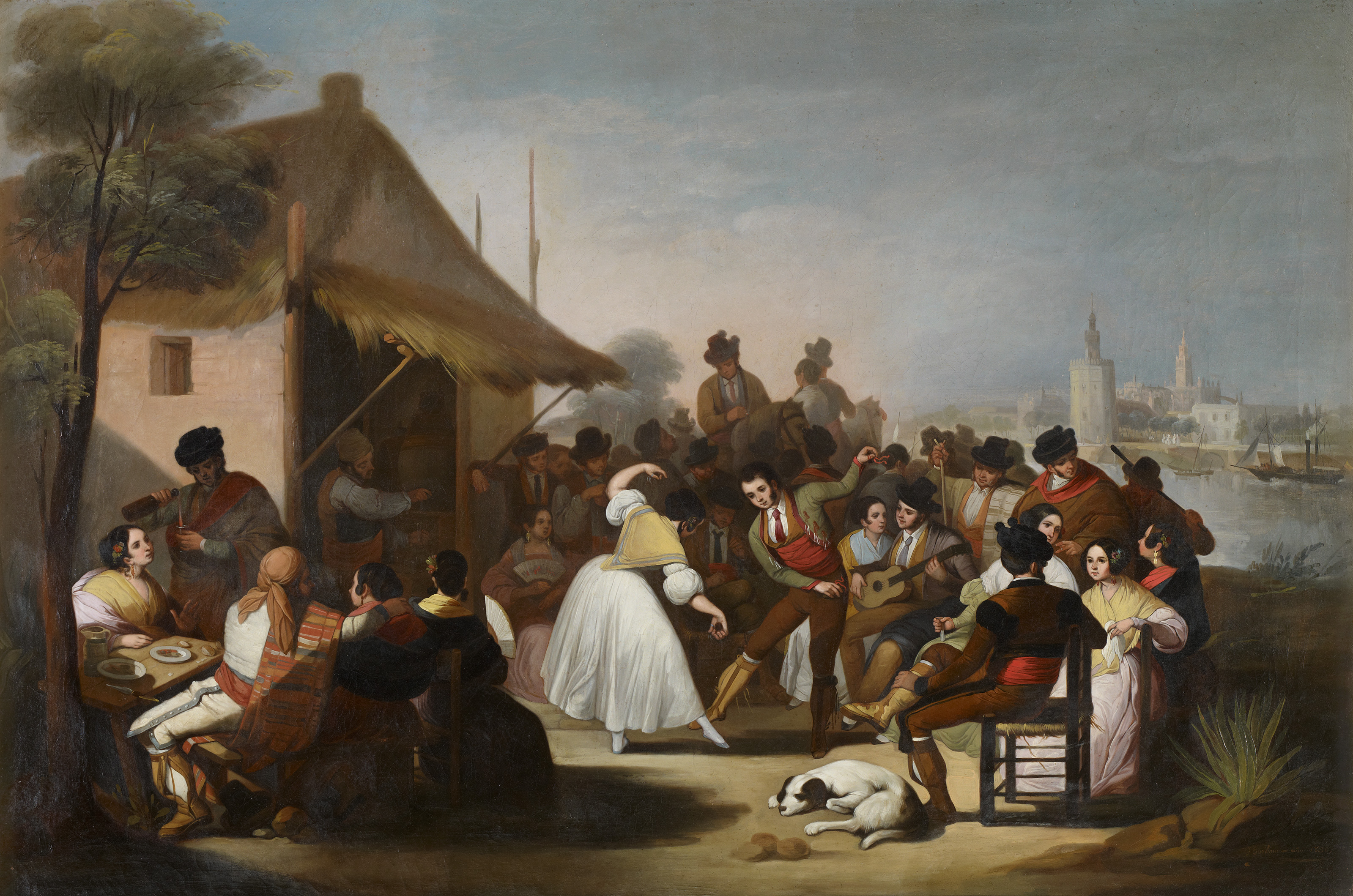 A Dance in Triana

In the Triana district, probably near the orchards of the convent of Los Remedios by the river Guadalquivir, there is a racket going on outside a lowly inn. In the centre of the composition a couple, the man dashingly dressed as a majo and the woman in everyday clothes, dance a bolero playing the castanets to the sound of another majo who plays the guitar, also accompanied by a girl. The people gathered around them, men and women dressed in the same way, are engaged in lively conversation and others eat and drink at a table. The scene is enclosed in the background by a significant view of Seville from the south, which not only allows the setting to be identified fairly accurately but also clearly displays the architecture of the Torre del Oro and the mint buildings and, behind them, the cathedral and the Giralda tower. Visible on the river, in front of these symbolic ancient constructions, are a few sailboats and a small steamboat that bears a considerable resemblance to the Real Fernando, commonly known in the city as “El Betis” or the “Fernandino”. This merchant vessel was a landmark for Seville as it was the first Spanish steamboat to cover the river route between Seville and Cadiz after first making the run in 1817.

This work reveals Escribano’s compositional skills at handling large groups of figures in the manner of the English painters who had produced important works on the same theme around that time. It also evidences the ease with which the painter arranges the figures around the pair of dancers, linking them by means of conversations or exchanged glances. This device, so characteristic of Andalusian genre scenes, often allows him to display his ability to describe the turns and foreshortening of the figures, which are portrayed in a very natural manner without losing their characteristic rigour of drawing. The Andalusian artist conceived this scene from his strict academic training, in a canvas of Poussinesque size executed in the refined style of a history painter. The figure of the majo wearing a hat with turned-up brim, seated on a chair facing a young woman who frames the group on the right of the foreground, is particularly notable for its quality. Escribano likewise adds to the picture the appeal held in the period by the mixture of the majos and country dwellers and women in their finery – a visible combination of the rural and the urban worlds, embodied here by the distinction between the two sexes and infused with a certain sensuality for the public at whom this work was aimed – as this type of dress aroused great interest in 19th-century Europe. For this purpose he uses a slightly subdued palette that was in fact very much in keeping with the purist taste in vogue at the court. The figures grouped around a table in the foreground on the left, where a bandit puts his arm round the shoulder of a girl sitting next to him, are also very carefully executed.

Despite the schematic depiction of the purely landscape aspects of the work, which reveal the painter’s academic training that focused above all on the human figure, this painting should be considered one of Escribano’s finest. The artist, who is normally overlooked when dealing with Andalusian genre painting and regarded more as a portraitist and history painter, must have produced more delicate genre scenes like the present one owned by the Carmen Thyssen Collection. In any case, it is one of the best testaments to how the art of the Sevillian master Antonio María Esquivel (1806–57) was embraced by Andalusian painting. If Escribano’s well-known Visita del conde de Ybarra al Museo de Bellas Artes de Sevilla (“Visit of the Count of Ybarra to the Seville Museum of Fine Arts”) (Seville, Cajasol Collection) attested to the importance such an iconic and innovative picture in Spanish art of the day as Esquivel’s Los poetas contemporáneos. Una lectura de Zorrilla en el estudio del pintor (“The Contemporary Poets. Reading Zorrilla at the Painter’s Studio”) had had in defining his artistic personality, this new work further confirms this idea. The conception of the composition, the treatment of the figures and even the incorporation of a landmark background as clearly significant as in the other two aforementioned paintings reveal Escribano’s evident borrowings from the language of the great Andalusian master of the first half of the 19th century.

A Dance in Triana