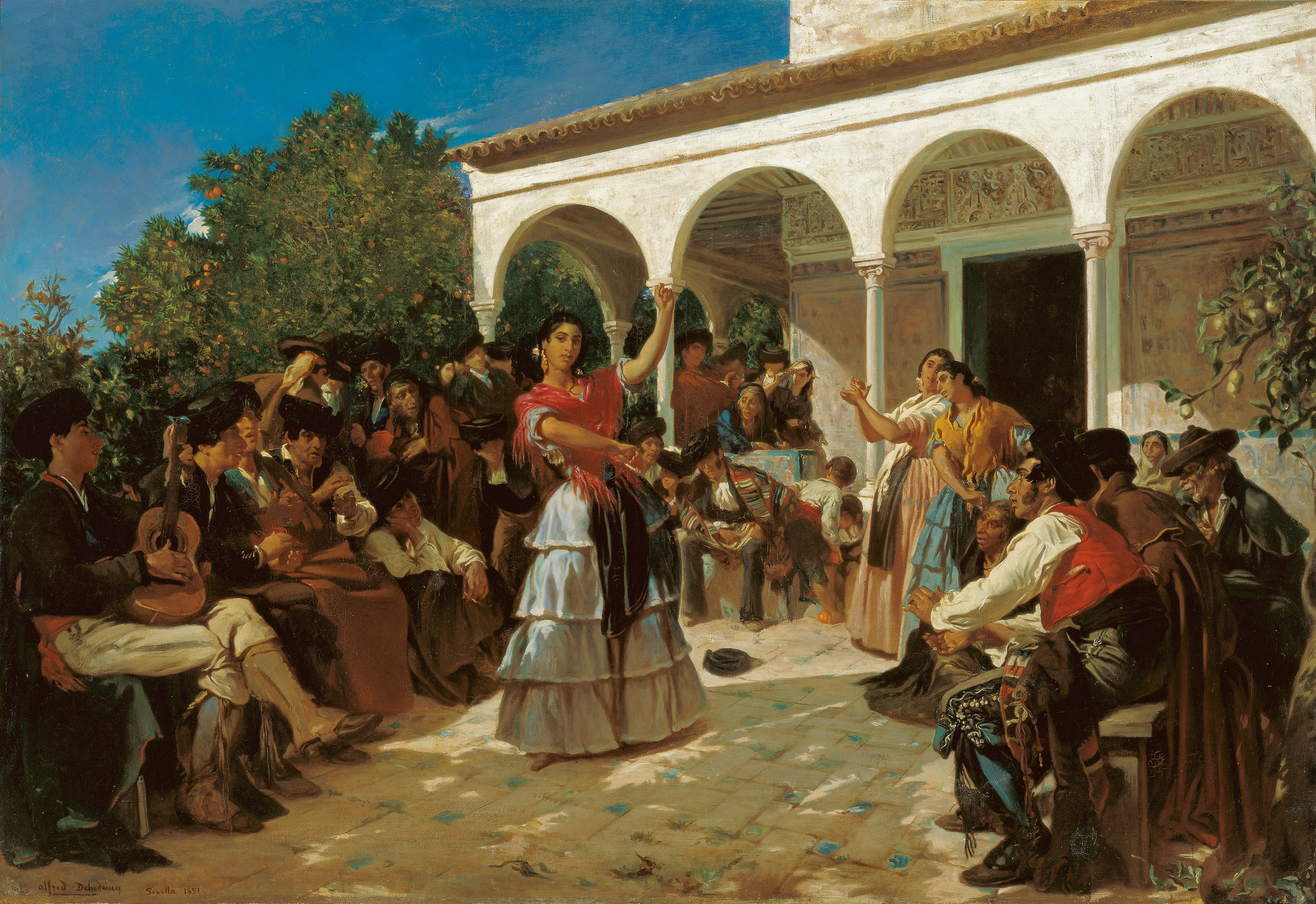 A festive counterpoint to its companion piece, which depicts A Confraternity in Procession along the Calle Génova, Seville, this work is a lively scene of gypsies dancing flamenco outside one of the Arab pavilions of the Reales Alcázares in Seville, known as the Pavilion of Charles V, surrounded by orange trees. In the middle of the circle, a gypsy woman dances to the sound of the singing, music and hand-clapping of her companions, who spur her on while gazing at her sensual swaying movements.

These two fascinating paintings are undoubtedly the most important works Dehodencq executed in Spain while in the service of the Duke and Duchess of Montpensier. They are also particularly good examples of the vision of picturesque Spain and its folk customs that was shared by the French artists who visited Andalusia during the first half of the 19th century.

Indeed, the artist’s vision of everyday life is interwoven with the contrast between the festive joy of the colourful, entertaining dance and the imposing nature of the fervent devotion inspired by the procession, whose drama is heightened by predominantly dark hues compared to the bright, vivid palette of the present canvas. To foreigners’ eyes, these extremes were an obvious reflection of the most exotic, profound and ancient aspects of the typical "Spanish character".

These two paintings, however, also display quite clearly some of the more personal traits of Dehodencq's style, which differs from that of the majority of the Romantic Andalusian painters in the importance attached to the large, almost monumental human figures. This tends to diminish the naturalness and the freshness of their movements and also causes them to sit rather awkwardly within the setting, which is relegated to a secondary role. However, Dehodencq's emphasis on his figures reveals his acute powers of observation in the characterisation of the different human types, as this picture shows. We can clearly distinguish the figures who are gypsies, and it is also easy to spot the artist's repeated use of a female prototype with oval face, aquiline nose and large eyes in his genre paintings.

The two works also reveal a contrast between the technique Dehodencq employed in the representation of the figures – which are rigorously drawn and outlined with even the smallest details of their adornments and clothes, and modelled by marked contrasts of light – and in the backgrounds, which are executed with more sweeping, fluent brushwork.

There is a pencil drawing of Two Gypsy Dancers which may be a preparatory sketch for this composition.