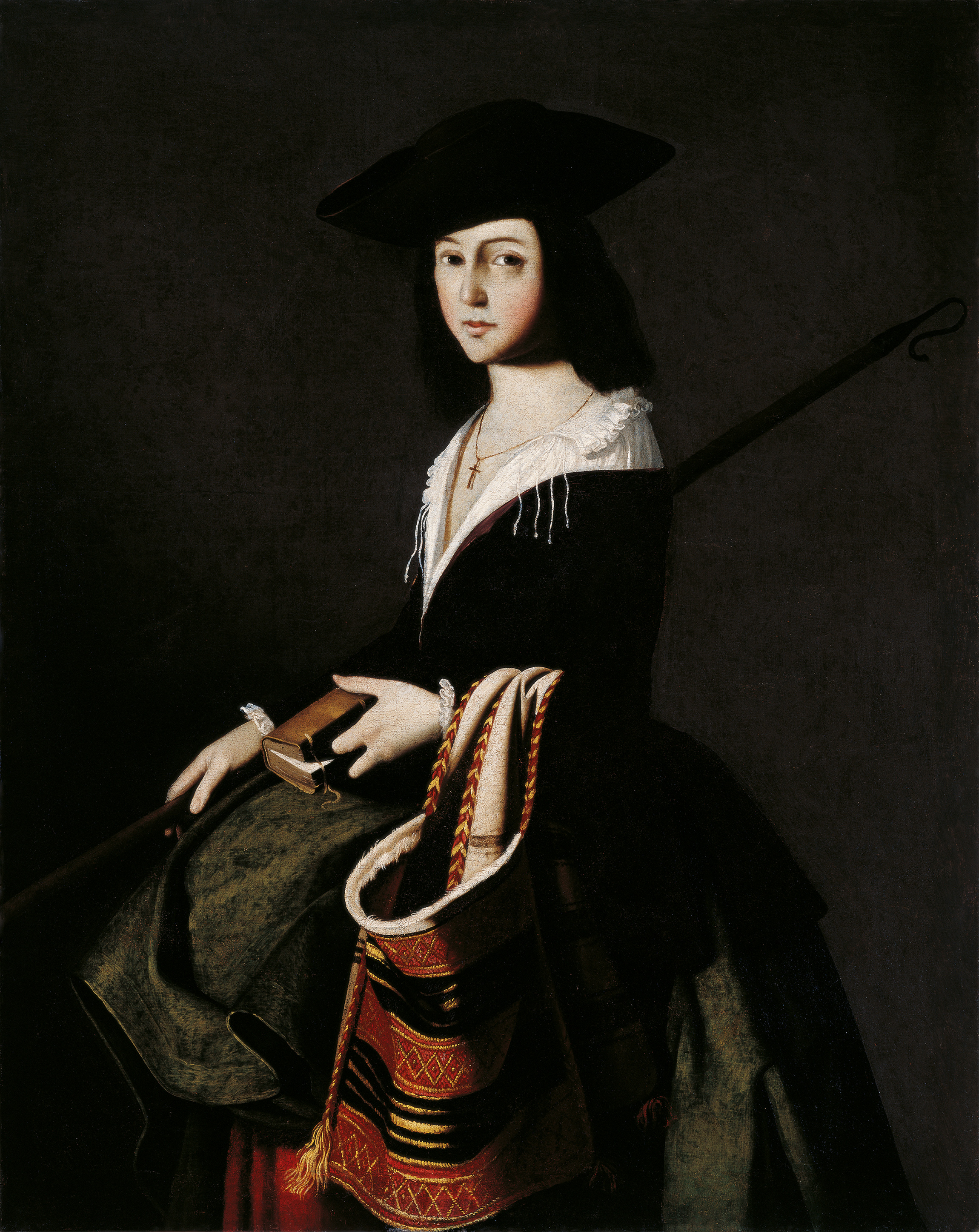 St Marina, a Spanish virgin and martyr, lived in the first centuries of our era. According to early Spanish breviaries, she was martyred in the region of Galicia, in Aguas Santas near Orense, the city of which she is patron saint. Her feast day is celebrated on 18 July and her most common attributes are the lit oven, the instrument of her martyrdom, and the three springs which tradition has it emerged from the ground where her severed head fell. There are no references to her life and martyrdom in the Flos Sanctorum and she has often been mistaken for St Margaret of Antioch with respect to iconography, as both saints share a similar history in a pious legend that was particularly widespread in the Middle Ages. Her cult is reported in Jacobus de Voragine’s Golden Legend, which tells the story of a Marina, an only daughter whose father decided to enter a monastery. In order not to leave her alone, as she was still a child, he decided to take her with her him, concealing her sex. He dressed her in male clothing and introduced her to the community, asking the friars to accept both of them. The girl grew in obedience and observance under the name of Brother Marino, promising her father on his deathbed that she would never reveal her secret. Sometime later she was accused of raping a girl and fathering the child she was expecting; Marina took the blame, not revealing her true condition, and was expelled from the monastery. Thereafter she survived on alms, shunned by everyone and enduring ignominy and humiliation until the monks were moved by the hardships she suffered and took her back, in exchange for which she performed the lowliest and most degrading tasks. After she died and her corpse was shrouded, the monks realised the injustice that had been committed and Marina’s great sacrifice, and decided to make amends by burying her in a prominent spot in the monastery’s church. When the deceit was discovered, the woman who had wronged her was possessed by the devil but saved after visiting the saint’s tomb and asking her for forgiveness.

The painting shows that Zurbarán portrayed the saint in a very personal manner without specific iconographic references, as was fairly common practice in his handling of these themes. The figure is depicted three-quarter length and isolated, turned slightly to the right – a device commonly used by the painter to enhance the volume of the figure and also to achieve the processional appearance works of this kind usually have. The plastic handling of forms characteristic of his finest style is achieved through the use of fairly tight, compact brushwork, and he lends brilliance to the colours and sharpens the contours by silhouetting the body against a dark background with an intense source of light that emphasises the flesh tones. St Marina wears a dark, wide-brimmed hat and an open-necked white chemise with a frilled collar, a black bodice and a thick red woollen skirt with a green overskirt. She holds a long rod with a hooked end, possibly an allusion to her martyrdom, and a prayer book, a symbol of learning and loyalty to the Gospel. The book and the cross around her neck are the only explicitly religious features. The saddle bags hanging from her arm imbue the painting with a familiar and folk air and strike the only different note of colour in the work.

Zurbarán’s isolated saints are a formal continuation of those that were painted in Seville in the first decades of the 17th century. Pacheco’s marked the starting point on a path that was later followed by Francisco Varela and Juan del Castillo and ended in the output of Zurbarán. According to Emilio Orozco Díaz (1947 and 1957), Zurbarán’s saints are genuine portraits “a lo divino” – that is, of ladies who wished to be depicted with the iconography of the saint whose name they shared; this fashion can be explained by the prevailing atmosphere of religious fervour in Spain of the period. However, this interpretation does not hold true for all cases as, although there are clear examples of pictures that are portraits – as may be seen in the individualised features of the St Catherine and the St Eulalia (?) in the Bilbao Museum of Fine Arts – in others, such as the present painting, the painter uses credible archetypes with lifelike features which he repeats in other female depictions of the 1640s and 1650s. María Luisa Caturla (1953) interpreted works of this kind not as “paintings to pray before” but as processional pictures designed to adorn church walls, as in the early Christian and Byzantine basilicas. As Caturla maintains, the clothing of Zurbarán’s female saints may be inspired by processions or Corpus Christi plays or, as stated by Gállego and Gudiol (1976) and Serrera (1988), by the costumes worn by villagers in plays, as it has a theatrical air.

Paintings of this kind – many of which were produced for the Spanish American market – account for much of Zurbarán’s output, especially of the 1640s and 1650s when the success that bound him to producing large cycles of works for religious orders gradually waned. Guinard (1960), according to whom many pictures of female saints were produced by Zurbarán’s workshop, states that in order to identify the master’s hand it is necessary to look for vigorous relief, bright colours and delicacy of flesh tones. These qualities are recognisable in the present painting, which is considered to be the original of the St Marina in the Seville Museum of Fine Arts, even though the latter is a full-length figure.

The Seville museum holds a series of virgin saints from the Hospital de la Sangre that are similar in composition to the painting in the Carmen Thyssen-Bornemisza Collection. They all have the rather large body, small head and slightly sloping shoulders that were characteristic of Zurbarán’s art around 1650 according to Caturla, allowing the work to be dated to those years. The model, the softness of the brushwork and a certain shift away from the minute description of details and qualities also indicate it should be ascribed to those years.

Guinard mentions several replicas and copies of the Seville St Marina – in the art museums in Gothenburg and Detroit, and in a few private collections – but seems only to report full-length figures. The prints of the saint in the Biblioteca Nacional in Madrid, made by Bartolomé Vázquez in 1794, and in the Bibliothèque Nationale in Paris, executed before 1808 by Et. Lingée, display the same composition. All these representations are probably based on the present St Marina.