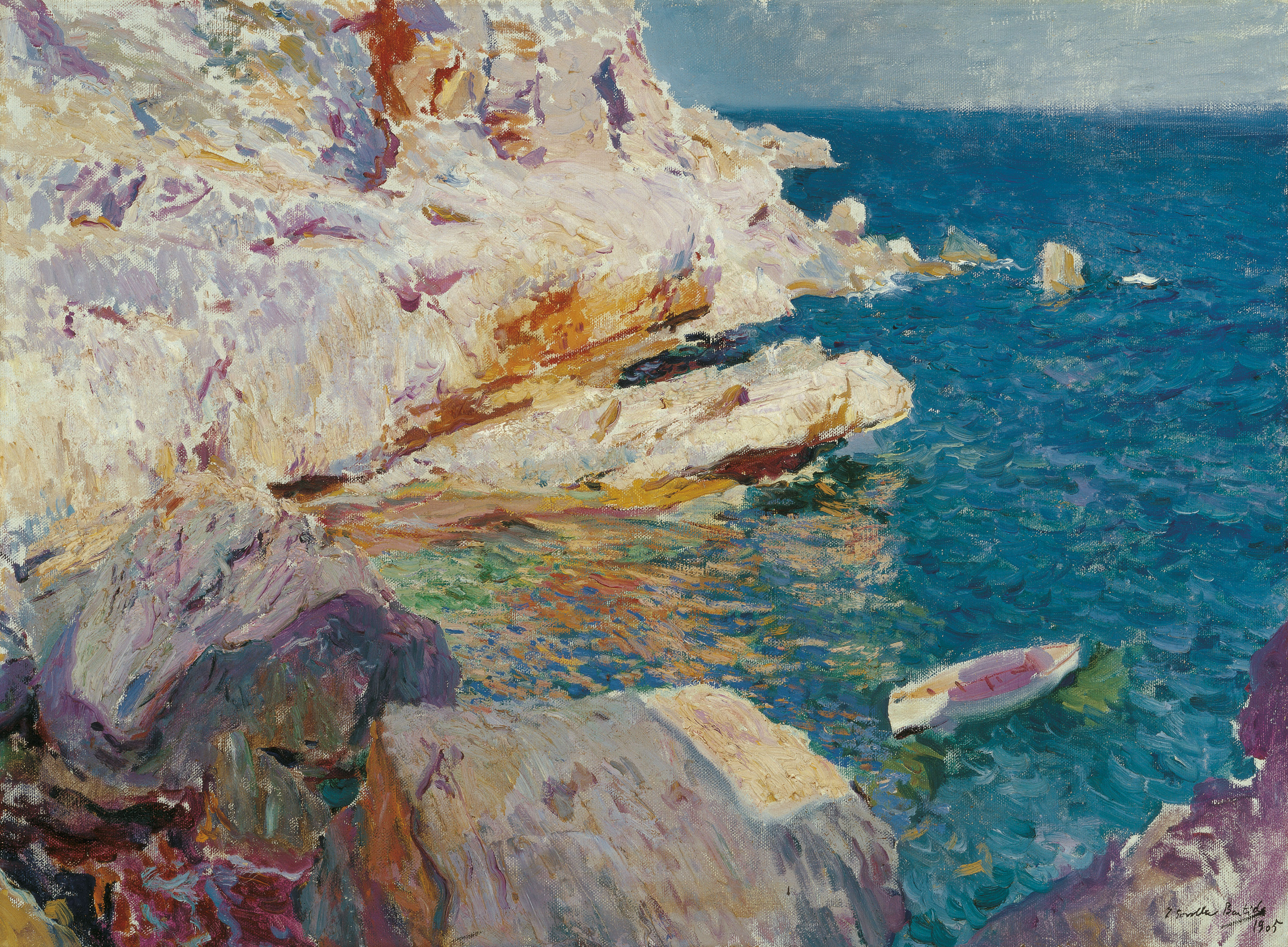 Rocks at Jávea and the White Boat

Joaquín Sorolla visited Jávea for the first time in 1896. His surprise at its beauty and the difference of its coastline compared with that of Valencia are evident in a telegram he sent to his wife on his arrival and in a subsequent letter: "Sublime Jávea, immense, the best I know for painting ... I shall be here a few days. If you were here, two months." And: "This, Xabia, has all that I could wish for and more, and if you could see what I have in front of my cottage, you’d be lost for words to praise it; I fall silent from the emotion that still grips me; imagine, my house is on Monte Carlo itself; this is all a mad dream, just like living on the sea, aboard a great ship. You made such a mistake in not coming!! You'd be so happy... You'd enjoy yourself so much! [...] this is the place I've always dreamt about, Sea and Mountains, but what a sea!" He returned there to paint in 1898, 1900 and 1905.

This beautiful picture, Rocks at Jávea. The White Boat, comes from the last year of painting in Jávea. It was a summer he would remember fondly for the rest of his life, often referring to it in letters to his wife, for they were happy days full of great artistic achievement.

In 1905, Sorolla was preparing his first great solo exhibition, to be held the following year in Paris and wanted to take some new paintings along. Knowing from his previous stays in Jávea how the colour and transparency of the water could contribute to his work, he decided to spend a long summer there with his family painting. Fascinated by the reflections of the light and undeterred by "the even more difficult painting", that summer he produced a large number of works whose technique and pictorial skill reached heights hard to surpass. Of that time and those works Bernardino de Pantorba wrote: "In the splendid studies of the sea at Jávea [...] Sorolla, without increasing the colours of his palette, which, as with all true colourists are few, extends and multiplies the number of nuances as well as the number of bold contrasts, and achieves superb harmony with blues and yellows, violets and cadmiums, greens and reds, not to mention the extremely rich modulations of white, a colour through which he adds such a personal note. He is not deterred by any of the problems posed by the dazzling Levantine radiance. Gold reflections of rocks in the transparent water, sea spray in the shadow, white horses on the rolling waves [...]; the momentariness of an iridescence; the forever changing; all that shines fleetingly then flees."

During that summer of 1905 he painted sixteen major works with the theme "sea and rocks". They are similar to this painting and their titles include: Rocks of the Cape. Jávea (New York, The Hispanic Society of America), Las rocas del cabo. Jávea ("The Rocks of the Cape. Jávea" – Bayonne, Musée Bonnat), Reflejos del cabo. Jávea ("Reflections of the Cape. Jávea" – private collection), and El bote blanco. Jávea ("The White Boat. Jávea" – private collection). This last painting is very similar toRocks at Jávea. The White Boat, except that the angle precludes the inclusion of that powerful part of the coast formed by the spurs of the cape known as Cabo de San Antonio.

Although all the paintings are of the very highest quality, Rocks at Jávea. The White Boat displays the best composition and the most delicate colour range of them all.

Rocks at Jávea and the White Boat