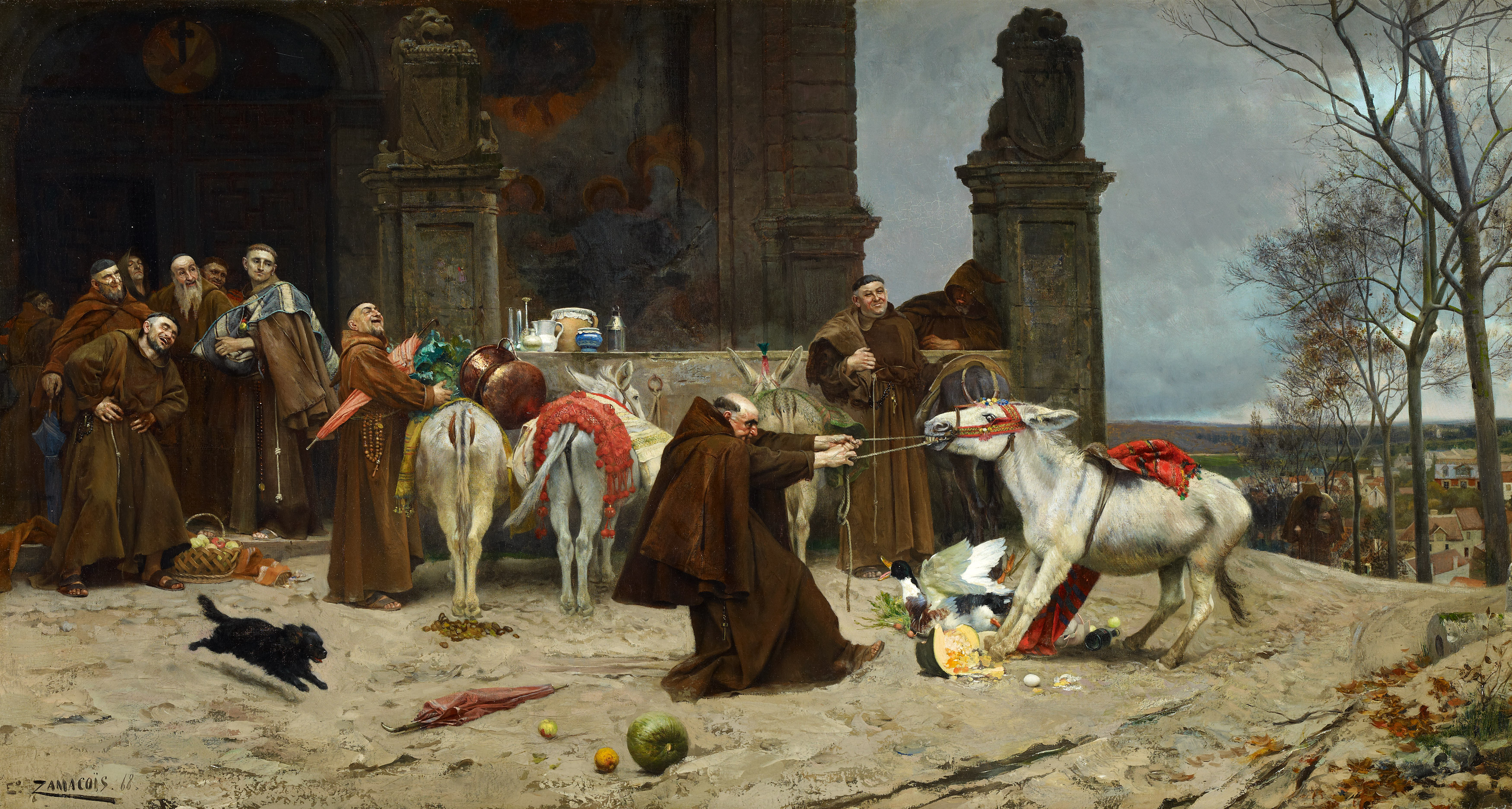 Returning to the Monastery

This characteristic genre scene by the Bilbao painter Eduardo Zamacois is a comical depiction of a group of Franciscans returning to the monastery after a visit to the market in the village, whose buildings are visible lower down on the right-hand side. The focus of the composition is the anecdotal plight of the bald monk in the foreground who is unable to control the donkey and tugs at the two ropes attached to its mouth, while the animal dumps the load it was carrying, scattering it on the ground. Meanwhile, the other Franciscans at the entrance of the monastery beside two pairs of tied donkeys laugh at their companion. The little black dog racing across the lower left corner – a figure repeated in the same position in other works from that year such as The Snowball in the Stewart Collection in New York – further enlivens the composition.

The painter sets the scene outside an ancient monastery building that occupies more than the left half of the background, while the cloudy sky borders the composition on the right. A broad parapet, enclosed on the sides by two pillars topped by lions bearing coats of arms, marks the entrance to the monastery, whose main façade, in semidarkness, displays rich mural decoration.

The naturalism with which Zamacois endeavours to infuse this genre painting is evident in the portraits and gestures of the main figures and in the careful arrangement and depiction of the small objects carried by the animals or lying on the ground. The array of vessels spread out on the parapet is particularly delicate and features objects made of diverse materials, as if an artistic exercise: ceramics, glass and metal. The painting, which is larger than the usual size of his works, evidences his ability to compose both indoor and outdoor scenes involving a large number of figures.

The painter executed Returning to the Monastery at the time of his first trip to Rome, which he visited in 1868 at the suggestion of Eduardo Rosales, staying at the studio of his friend Mariano Fortuny. It is part of a large cycle depicting the customs of monastery life, to which El refectorio de los Trinitarios en Roma (“The Refectory of the Trinitarians in Rome”) shown at the Paris Salon that year also belongs. The present work was exhibited at the Salon of 1869, to which it was sent together with another work by him, A Good Pastor, and where it was acquired by the American collector Robert Cutting who, along with William Hood Stewart, was chiefly responsible for making his work known on the American market.

Returning to the Monastery was thus painted when Zamacois’s short but successful career in France was taking off under the protection of Goupil, the same dealer his fellow Spaniard Fortuny had. Without discarding the influence of his master Meissonier, the painter displays in this work a personal mastery of draughtsmanship and of the comic streak that characterised all his favourite genre and everyday scenes.

In 1866, the year this work was shown at the Paris Salon, the writer Eugene Benson wrote in an article published in The Art Journal that “The pictures of Zamacois had the attraction of the bizarre and the perfect. The picturesque, the grotesque, the elaborate, all in one frame – this was more than the severe Gérome gave in his studied sensualities, more than the dry and prosaic Meissonier gave in his studies of costume and character.”

However, compared to his contemporaries and, chiefly, his fellow Spaniard Fortuny, the Bilbao-born painter lacks the rich colour and precious brilliance of the latter. His palette is predominantly of dull ochres and blacks, with brighter hues only in the details of objects.

Returning to the Monastery