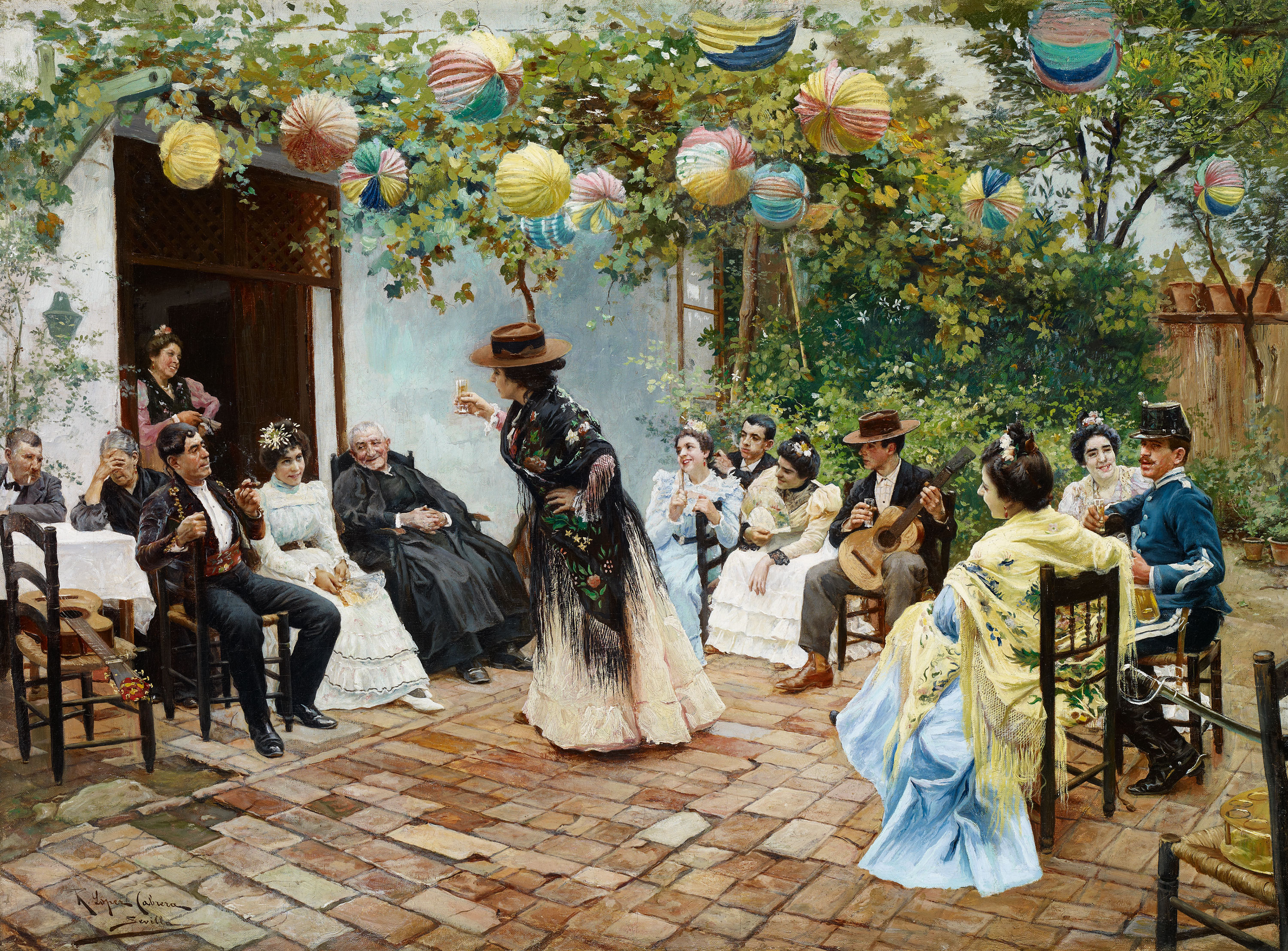 Beneath the handsome trained grapevine of a tiled courtyard adorned with paper lanterns a wedding banquet is taking place. A flamenco singer, wearing a wide-brimmed hat and wrapped in a shawl, has risen to her feet leaving her guitar on her chair in order to drink a toast to the happiness of the newlyweds. The couple listen eagerly to her words before the satisfied gaze of the priest seated next to them and amid the overall joy of the rest of the guests.

Sold on the American market as The Toast and reproduced occasionally as Fiesta de boda (“Wedding Celebration”), it is no doubt the painting entitled Newlyweds sent by López Cabrera to Buenos Aires in 1905, together with others entitled Pilletes de playa (“Beach Rascals”) Componiendo la red (“Mending the Net”), La hora del baño (“Bath Time”), La cocinera (“The Cook”), Mariscando (“Gathering Shellfish”) and La vuelta de la pesca (“Returning from Fishing”) for one of the exhibitions of modern Spanish painting staged by the critic León Pinelo at the Salón Castillo in the Argentine capital. Indeed, in addition to the title, both its style and the clothing are very much in keeping with the early years of the 20th century, the period in which López Cabrera, who had by then attained maturity, produced his finest genre paintings of which the present work is a very good example.

From 1890 to 1910 the Sevillian artist devoted most of his efforts to painting human types and genre scenes, generally Andalusian and sometimes tinged with drama or social criticism in accordance with the trends in vogue during those years. They are deftly and neatly drawn works in which he clearly defines the figures and objects in the compositions, always displaying a very keen sense of observation both in the description of objects and above all in the treatment of the human figures. Indeed, López Cabrera stresses their different emotions, hinting at a subtle plot in his scenes, which are superficial and anecdotal in appearance and concerned chiefly with picturesque and decorative qualities.

From the sly, satisfied gesture of the elderly priest to the innocent and excited gaze of the bride, or the trusting expression of her new husband who good-naturedly receives the toast smoking a handsome cigar, all these expressive nuances evidence this painter’s ability to portray human types, at which he was especially skilful. In addition, the apparent discomfort or emotion of the mother, who covers her eyes behind the bride and groom to conceal her possible malaise at a marriage that perhaps is not to her liking, and the sidelong glance the soldier steals at the girl in the shawl seated in the foreground while listening to the conversation of his companion who drains his glass further attest to López Cabrera’s undisputable mastery of this genre, of which he would become a prominent practitioner in Sevillian painting of the turn of the century.

The scene is devised with a stark realism without artifice in both the scenographic design of the open courtyard where the celebration takes place and in the handling of the vegetation and the clothing of those present, in addition to seemingly insignificant details such as the brass tray on the rush chair in the foreground that is cut off at an angle as if in a photographic view.