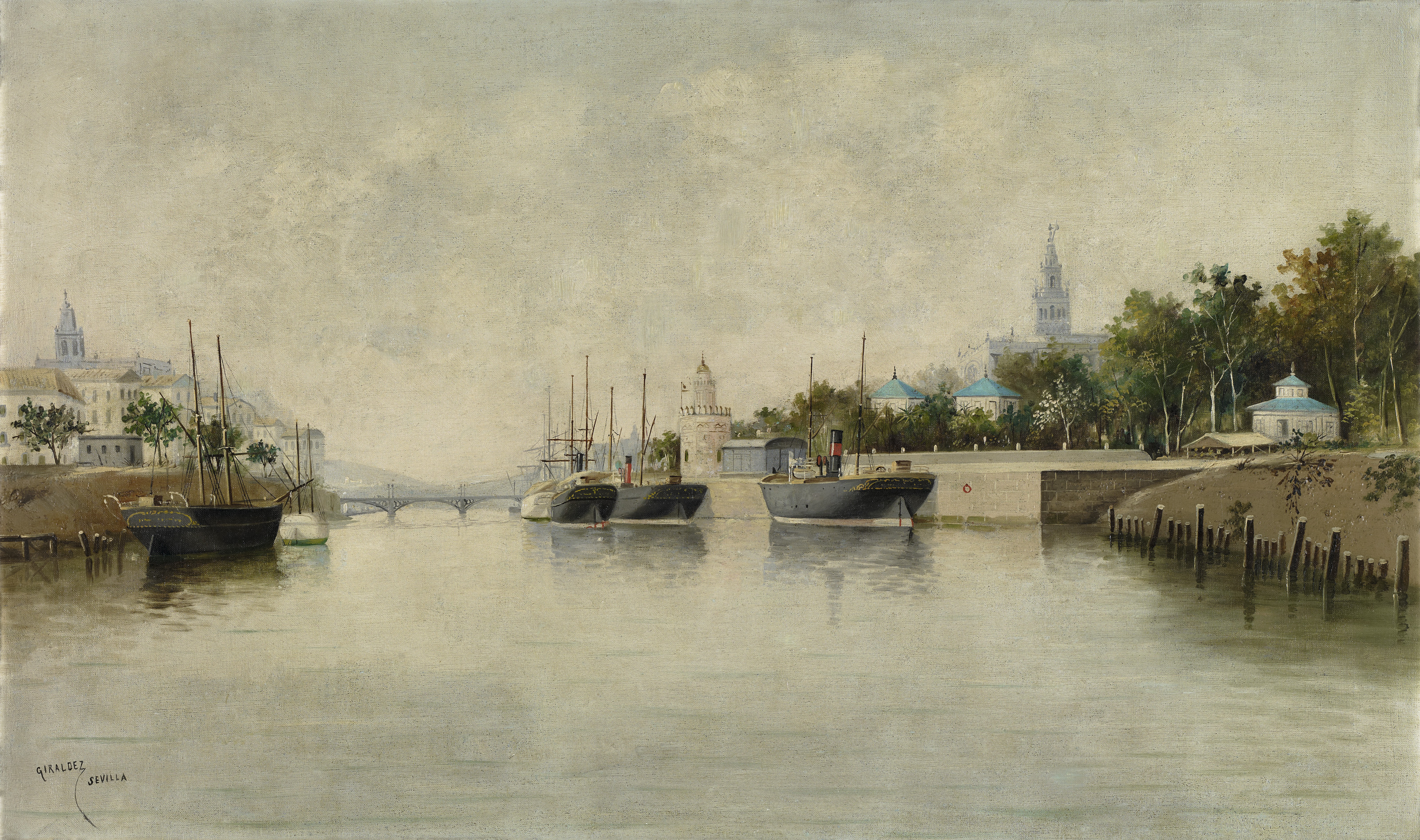 The Port of Seville

The use of the whole width of the River Guadalquivir to fill the foreground serves to create a contrast between the great mass of water occupying almost all the lower half of the painting and the sky above, which dominates the upper half. This is because the built-up area and the mass of trees become greatly reduced in a perceptible convergence of diagonal lines, the lower ones produced by the perspective lines of the banks, and the upper ones by the gradients or slopes of both skylines, interrupted at a few points only by towers. The point where these diagonals converge, i.e. the intersection of the "X" arrangement, is one of Seville's three main architectural landmarks – the famous Triana or Isabella II Bridge (one of the oldest iron bridges still standing in Spain) with its interesting structure and above all the great beauty and high quality of its design. Seville's two other best-known, iconic constructions – the two Almohad towers – can be seen to the right. In the El Arenal district stands the Gold Tower, an Albarrana tower with its wall (which once led to the water from the old defensive compound) and, further inland, the Giralda – the former minaret of the Almohad mosque.

Apart from vivid dashes of colour from the three small pavilions with blue roofs, there is, in the presence of those bare-masted ships with their funnels from the new world of steam, a certain picturesqueness and Romantic sensitivity.

The only competition to the beautiful although cold range of greys and the surrounding light of the cloudy day reflected in the water is the dull green of the trees on the right. The dry descriptiveness of the drawing of the elements in the composition adds to that "frozen" sensation which is in fact further intensified by the complete absence of people or – plant life excluded – living things of any kind. Normally regarded as a marine painter, Giráldez produced a large number of views of the Guadalquivir or, more precisely, of Seville's river port. This was confirmed at an early stage – 1923, practically during the artist's lifetime – by the art expert F. Cuenca in his Museo de pintores y escultores andaluces contemporaneous ("Museum of Contemporary Andalusian Painters and Sculptors"), who wrote that Giráldez (whom he confessed he knew) painted views of the Guadalquivir with the Giralda and the Gold Tower from memory with extraordinary ease and noteworthy execution – but in Barcelona. Of those canvases, he added, many stayed in that city, as Giráldez supplied an art firm which paid him fifty pesetas per picture and sold them on for three or four hundred. Such was the demand, Cuenca concludes. Indeed, further testimony (apart from the painting discussed here) is another work, entitled Barcos en el Guadalquivir ("Ships on the Guadalquivir"). Another type of picture – and a second facet of Giráldez's marine paintings – are his depictions of ships (normally steamers), whose "portraits" the owners commissioned him to paint.

The Port of Seville