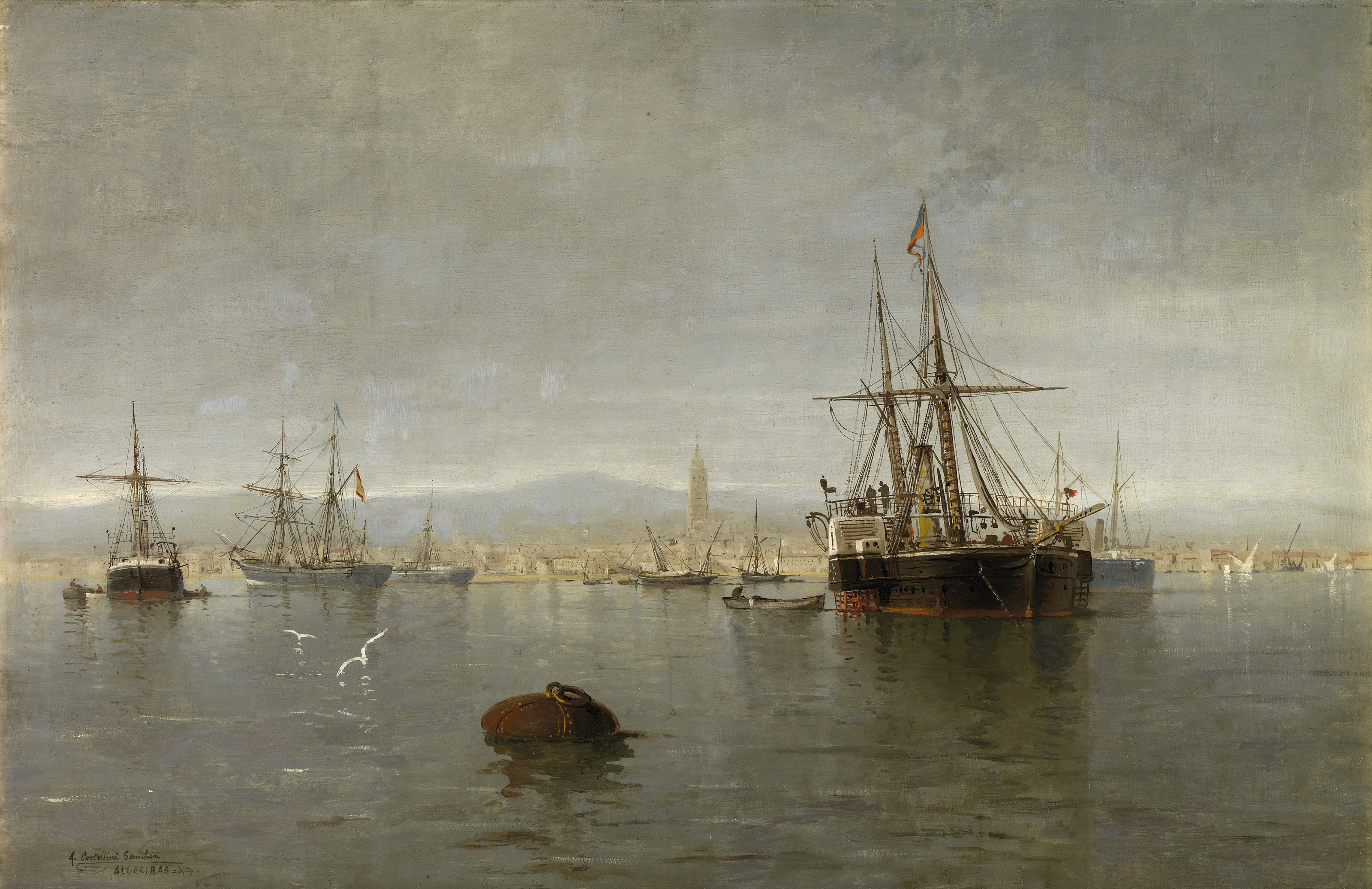 The Port of Algeciras

This marine oil painting of the port of Algeciras shows an overcast sky with a large mass of cloud at upper right, the Sierra de la Luna mountains very subtly running the whole width of the painting, with small amounts of snow on the peaks, and a persistent though not excessive mist enveloping the scene.

The mist covers almost all of the city of Algeciras. In the background at centre rises the tower of the church of Our Lady of the Palm and, although hidden from view, the houses around it can be sensed. The air is clearer towards the port, where all becomes better defined.

The depth of the perspective draws us slowly from the distance to the foreground, to the area in front of the ship anchored at right. To the left two gulls skimming the water are reflected as short lines. Clearly visible in the foreground, immediately to the right of the birds and slightly to the left of centre, is a mooring buoy.

The buoy is made of metal and the artist has captured all the details to perfection, including the rust on the metal and the anchor ring, designed probably to take the rope of a medium-sized vessel, and the rivets typically used for items made of copper – once hammered in by the workman, the cylindrical shafts hold everything firmly in place. A dent can even be seen on the lower left side above the water line. The buoy's reflection ripples gently and, to the soft lapping of the sea, fades to an irregular shape.

Scanning the painting from left to right, visible in the middle distance and anchored with her prow facing us is a two-masted fore-and-aft top sail schooner with a typical single yard and a perfectly lashed sail. Situated on the waist of the vessel at either side of the bridge, to port and starboard, are the parking lights. The hull is painted with the classic colours of the age, with the bottom, below the water-line, English red, above it black, and the edge of the bulwark white. A funnel is visible behind the foremast. On the starboard side two boats are fishing and on the port side a launch approaches the schooner, causing a gentle wake. The next vessel to the right is a two-masted brig schooner. Larger than the previous vessel, it lies at anchor and is visible from the port side. It has two masts and no engine.

The foremast has three yards, while from the boom foresail of the second, which is a mizzenmast, hangs a Spanish flag. The hull is painted grey with a white water-line and bulwark. The wake of the vessel in the water is logically somewhat diffuse.

Behind this and moored is a screw steamer, with a funnel in the waist. To the left are various boats with lateen sails, a launch or two, a felucca and a sloop in port.

As we approach the foreground, we come to the star of the painting, a side-wheeler with twin masts. Much attention has been paid to detail and it is viewed from the starboard side with the bridge and the wheel perfectly visible. Above the paddle wheel housings are a number of davits. The bottom is painted English red and the hull above the water-line black. From the foresail hangs an ensign, which may be that of a mail boat. On its starboard side a man fishes from a boat.

Behind the steamer on the port side is a steam schooner with a white quarterdeck, a funnel and two masts, both painted ochre, as was then customary.

Finally, to the right and in the background near the port are a number of small vessels with lateen sails. Almost at extreme right is a loading crane.

Painted from Isla Verde, this is a beautiful composition with fine colours. All in all, it is a very relaxing marine scene.

The Port of Algeciras