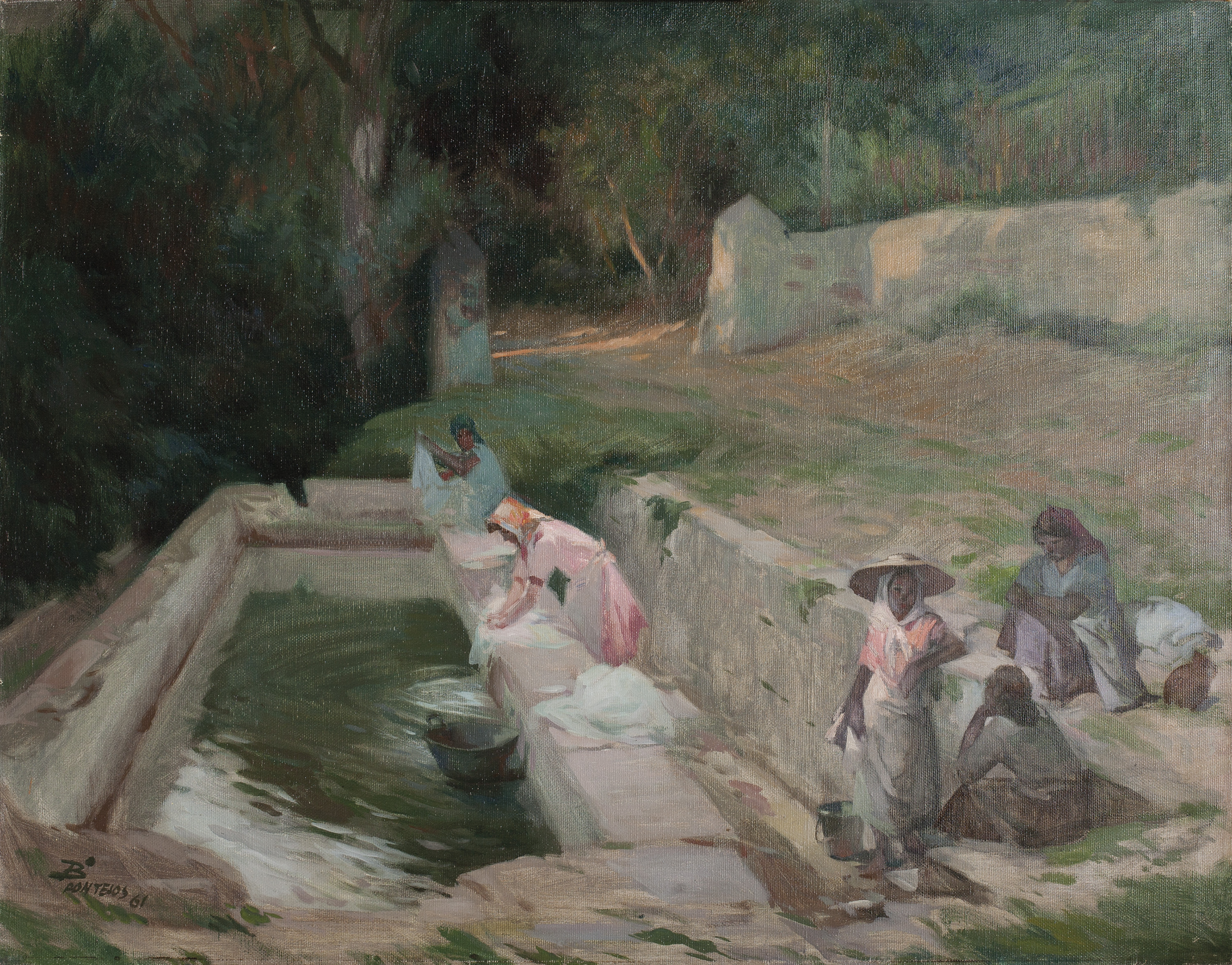 After twenty years in exile in Mexico, Bardasano returned permanently to Spain in 1960. This came as a turning-point in his life which actually dated from 1957 when, having travelled to Europe as Mexico's representative at the International Congress of Painters and Sculptors in Moscow and suffering a heart attack, he began to consider returning to his homeland, despite the fact that the Spanish political situation was unchanged.

This period was characterised by journeys and therefore by the special attention he paid to landscapes and urban views in his paintings. He produced numerous mainly small-format views of Paris and Prague on his return from the Soviet Union, of Madrid during his first foray back into Spain in 1959, and of Levant and Cantabrian seascapes in the early 1960s.

Pontejos, which features washerwomen at a large tank, was produced thanks to the ups and downs of Bardasano's life in those years. It was painted in the summer of 1961, during a stay on an estate (in the Cantabrian town of the same name) which belonged to a captain of the Compañía Transatlántica Española called Alfredo Cuervas whom Bardasano had befriended two years earlier aboard the Marqués de Comillas on the return voyage from Spain to Mexico. Bardasano's special situation in Spain, where he needed a visa and was forced to leave the country every year when it expired, plus that friendship with Captain Cuervas ultimately led to the production between 1963 and 1964 of a major collection of decorative panels painted by Bardasano for two ships: the Begoña – during his first voyage with his son-in-law Carlos Peña Alvear, then a first officer with the Compañía Transatlántica Española – and the Montserrat, on the request of the captain, who was Cuervas himself. Further testimony to this friendship are portraits in oil of the captain and his wife Lolita.

Although for Bardasano the human figure – or rather its portraiture – was the highest possible aspiration in painting, he was an all-rounder who indulged in all pictorial genres without exception. Although academic in training and concept, his technique and style were set free by his extraordinary powers and skill and found their highest expression in landscape painting. Light, sensory perception and the air itself as abstract elements materialised through patches of colour taking form on the canvas.

These paintings can be said to fall into two categories: bare landscapes reflecting nature or views whose intention is purely sensory; and landscapes with anecdotes that to a greater or lesser extent feature human presence, as in the case of Pontejos which reflects other aspects of Bardasano's work such as genre painting. In all cases, whether landscape, genre scenes or urban views, his vision sought to capture the unadulterated aspects of each place along with its history and geography – in short, what we understand as essences. In this sense, it linked in with the aesthetic ideas and currents of thought prevalent in his formative years during the first three decades of the 20th century.

Spurred by the hope of returning to his homeland after so many years of exile, Bardasano the traveller left in his landscapes a legacy of the different varieties of light found on the Iberian Peninsula and a testament to aspects, facts and customs of Spanish life – like those Pontejos washerwomen at work – found only in the past.