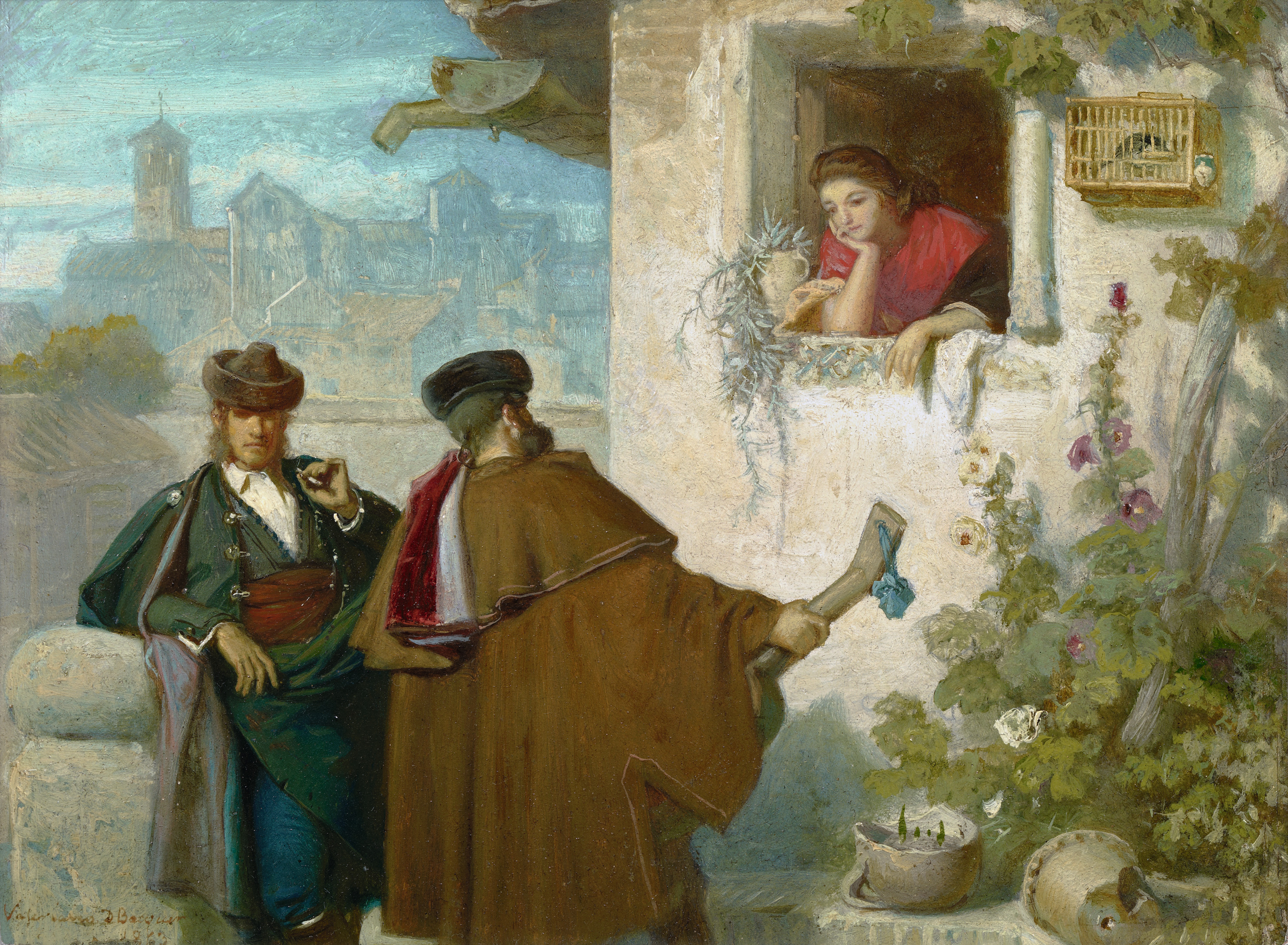 According to the dictionary of the Real Academia Española, “pelar la pava” means to engage in amorous conversation, the man from the street and the woman from behind railings or balconies; although the expression has diverse origins, it always retains the sense of a flirtatious, albeit rustic conversation. According to Luis Montoto, the expression – which literally means “to pluck a turkey” – originates from a serving girl who took her time to pluck a bird while chatting to her beau. For his part, Baron Davillier, in Viaje por España, compares the pose of a man holding a guitar to that of somebody plucking poultry.

In this tiny panel painting also known as The Serenade Valeriano Bécquer, in his usual gentle, silvery tones, recreates a “typical” courting scene in which a man serenades a demure young woman who only allows herself to be glimpsed through the window and whose pose – leaning on the windowsill with her hand on her cheek – is very common. For example, in Músicos ambulantes (“Street Musicians”), an illustration for Davillier’s aforementioned Viaje por España, Doré places her in the same pose, which became popular after Murillo’s Two Women at a Window (Washington, National Gallery of Art). The man furthermore carries a guitar, a musical instrument “typical” of Andalusia, and is dressed in a very particular manner in a voluminous cape and Andalusian hat with a conical crown; this attire can be seen in full in his sturdy male companion smoking a cigarette – a “papelito” of the type made by Carmen – who adds a further note of local colour.

It is not unusual for the man doing the courting to be accompanied. In a lithograph of 1850 by Antonio Chamán entitled Al que pela la pava, cobrarle el piso, a group of men (dressed in the same manner as those in the present work) wait in the distance for their companion to finish wooing and meet up with them. Bécquer himself, playing with the cliché, returned to the same composition – with slight variants – a few years later for one of the amusing watercolours in the album entitled Los Borbones en pelota (Madrid, Biblioteca Nacional), in which Isabella II peers out of the window while Father Claret plays a hurdy-gurdy and a rather bored Francisco de Asís looks on.

The ingredients of this painting are ancient customs – the woman at home guarding her honour and that of her family, as in the plays of Calderón de la Barca and in Muslim countries – exotic attire and adornments, such as the suitor’s extremely bushy “mutton-chop” whiskers, a far cry from “European” fashion. And the whole painting is steeped in the erotic tension of the conquest, for which Bécquer spares no poetic devices such as the inclusion of the caged bird, then a very popular pet. Indeed, it is not known whether it alludes more to the girl, a prisoner of her virtue, or to the serenader, who is unable to attain the object of his desire.

Distinguishable in the distance is the faint outline of the town centre, which situates this scene in the outskirts. The whitewashed walls of the house, the broken flowerpots and the flowers that need little attention – carnations, hollyhocks and a vine – infuse the scene with a traditional and rural air and a conservative feeling of serenity and an unchangeable world that contrasts completely with the urban world that is vaster and more dangerous, especially for young women.

Valeriano Bécquer’s picture has what foreign clients sought in Seville between the 1830s and 1860s. Its theme, format and vivid, cheerful colours made it an ideal memento of a pleasant stay in the city of the Guadalquivir.