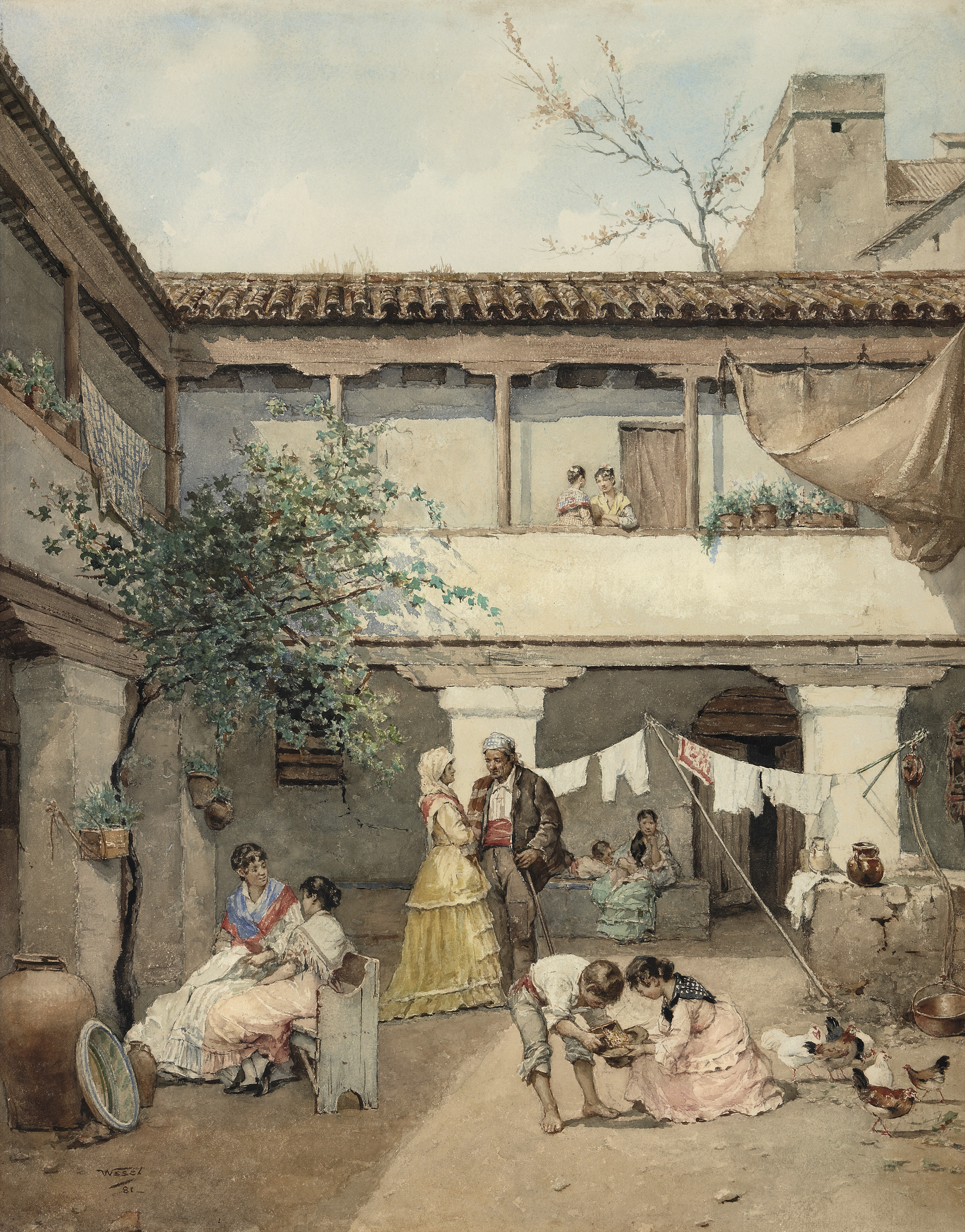 This watercolour, the companion piece to the previous work and also painted in 1881, features a composition related to the oil painting by the artist in this collection entitled Washing in the Courtyard and executed four years earlier. Both are connected with another earlier work, En el interior del patio (“In the Courtyard”), painted in 1874. All three depict, with a few variations, a similar typically Andalusian colonnaded courtyard with wooden footings supported by square pillars and, on the upper floor, by wooden posts. It is partially covered by awning, which was used as protection from the sun in the summer.

It is not unusual that the artist should have returned to this theme considering the interest that courtyards and what went on in them, especially during the summer, held for visitors to the city, many of them English, who were among the painter’s regular clients. There are many related testimonies, such as that of George Borrow, who stated in 1843 that “nothing is more calculated to interest the stranger as he wanders through Seville, than a view of these courts”. This author, who came to live in Seville in a large house with a courtyard, praised it highly and regretted that his destiny had not allowed him “to reside in such an Eden for the remainder of my days”.

The one shown here clearly belongs to a lower-class dwelling as it is not paved and instead of a fountain in the centre there is a well. As in the paintings on similar themes, the clothing is casually hung out to dry and there are also chickens in the foreground. There are two ground-floor openings, a door and a partially boarded up window. In the centre, standing out among the various people grouped into pairs, a dealer or tenant is engaged in conversation with the owner of the house. As is characteristic of the painter, the figures seem to be somewhat lost in thought, even those who converse with others. The anecdotal details are provided by the children in the foreground who empty the chickens’ food into the visitor’s hat while he is not looking.

Attention to details such as the flowerpots on the upper floor – as chickens are kept in the centre of the courtyard – the stone well, the vine and the various clay, earthenware and copper receptacles add to the picturesque nature of the composition. The pillars on the left are adorned with a wall flowerpot, a broken cooking pot filled with flowers and a window box. Below it are a large earthenware jar for storing water, a bowl, probably Triana ware, and a pitcher. On the curb of the well, beside which lies a copper cauldron, stand a white-glazed jug and an ochre-glazed cooking pot. Unlike in the other painting on this theme in the collection, in which the contrast of light and colour is very pronounced, the soft grey shadows barely attenuate the delicate, pale hues characteristic of Wssel’s watercolours. It is therefore closer to the other work mentioned, painted seven years earlier, with which it displays other features in common.