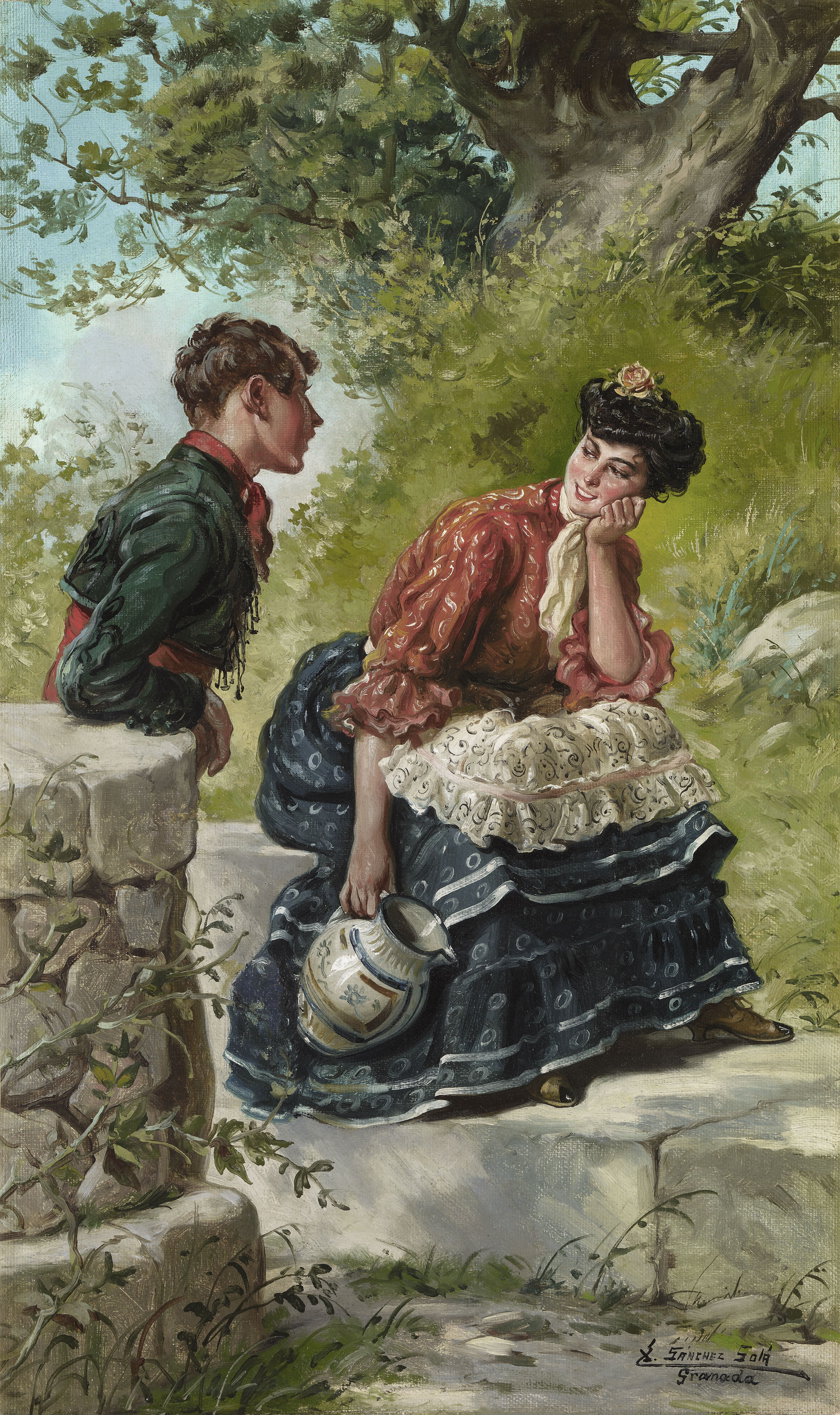 Courting Couple at the Fountain

This extremely vertical painting contains two figures. The one on the left is a young boy, almost a teenager, who is leaning on a well curb and is only visible from the waist up. As the well is on a high plinth, his position reinforces the vertical nature of the composition even more sharply. Although seated, the girl obeys the rules of isocephaly, i.e. her head is at the same height as the boy's, since she is sitting on a step that is even higher than the base of the well. The foreshortening and hard geometry of the step and its sides serve to reinforce the stony character of the lower part of the painting. All the solidity of this area is offset upper right (and the verticality above the maid reinforced) by the less evident mass of a large tree that covers most of the sky on that side, but is so harmoniously arranged that the diagonals of the trunk and the female figure's upper body form parallel lines. The balance of masses can likewise be observed at the centre of the painting in the correspondence between the volume of the well and the distinct – almost statue-like – three-dimensionality of the girl's body from the waist down. This is due to the sharp foreshortening of her legs, which is highlighted by the whiteness of the lace edging and the pink of the ribbon in that part of the skirt. The weight of these forms is aided visually by the rotundity of the pitcher in the girl's hand. The vessel is logically of white, blue and green Granada pottery, with the blue of its brim perfectly matching that of the skirt with its white-edged frills and the subtle white printed pattern. The young man's bolero with its colourful fringes is also blue, while his quince-coloured sash and neckerchief are a perfect complement to the girl's blouse, which is of the same colour, although again with fine white designs. Furthermore, the white of the girl's neck scarf matches that of her pinafore.

Although the picture is small in size, it displays a monumental sense of the human form, typical of this painter of the Granada school, whom the biographical dictionaries always describe as a painter of genre scenes, portraits and animals, as well as a watercolourist and illustrator. Another picture with a similar theme and the air of a genre painting – with a couple "billing and cooing" amid architectural features and huge ashlars – is Patio Andaluz ("Andalusian Courtyard").In other paintings it is a foreshortened figure or a posture that is repeated, as for example the female torso leaning forward diagonally and the face at an angle of forty-five degrees (half-way between frontal and profile) in Valenciana regando las flores ("Valencian Girl Watering Flowers"). Although she stands with her left leg forward and slightly raised, her pose is reminiscent of that of the girl in the painting in this catalogue.

As a painter of animals this artist tended towards sentimentality in his pictures of kittens, although his other great speciality was small pictures of altar boys. The expression pintor de monaguillos (painter of altar boys) was originally coined by Gaya Nuño. It must also be remembered that the most famous and financially successful artists – José Gallegos y Arnosa (1859–1917) as one example – indulged in this genre, proof being the Jerez's painter's Choir Boys in the Museo Carmen Thyssen Málaga Collection. With regard to this painting, we once referred to another "light-hearted" expression – "Monaguillismo with a capital M" – of Gaya Nuño's when he wrote: "The mediocrity of the years of Cánovas and Sagasta [note the still perceptible traces of prejudice against the aesthetics of the Restoration of Alfonso XII] would settle for nothing less than relegating religious painting to the level of pictures of pure, angelic, altar boys full of grace. (...) It was a fad in which almost all collaborated, doubtless because the wretched clientele required it so (...) There was a painter, Eduardo Sánchez Solá [the boldface is ours], who specialised in such an idiotic genre, and his altar boys smoking in the sacristy, playing cards or at bullfighters or pranks on a napping verger, etc., etc., must have been regarded as delightful little finds." Indeed, the scholar even pointed a finger at Picasso for indulging in "monaguillismo".

Courting Couple at the Fountain