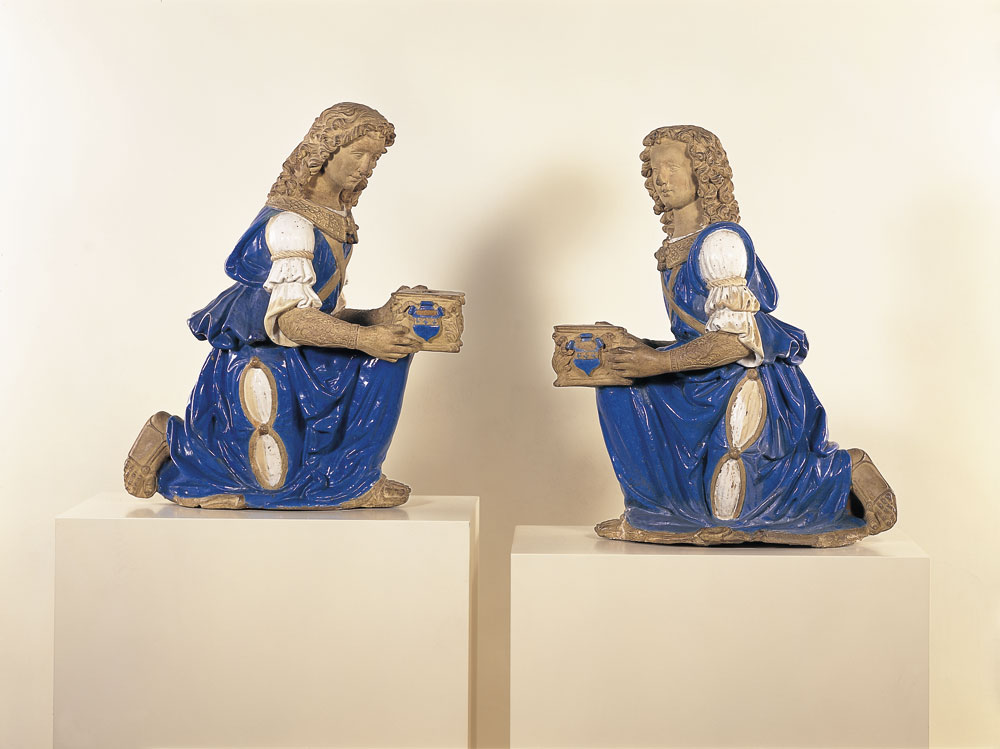 The provenance before the angels entered the collection of Thomas Fortune Ryan is given in the catalogue of Ryan's sale of 1933, and cannot be substantiated. It was presumably supplied to Ryan by Arnold Seligmann, Rey & Co. when he bought them. Feulner retains it, as he does the ascription to Giovanni della Robbia which the angels bore when they were in Ryan's collection and have borne since, with a dating of about 1500. The angels do in fact relate most closely in form and size to a pair of angels that are certainly from the workshop of Giovanni della Robbia, although from a considerably later date. These are in the Misericordia, Florence. Unlike the present angels, they are glazed all over in white, apart from shallow integral bases that are glazed in imitation of porphyry. However, at approximately 6.7 cm high, they are on the same scale and, allowing for the variations in detail that were normal in Della Robbia productions, it is clear that both pairs must have been pressed in moulds derived from the same basic model.

The angels of the Misericordia carry the same square candelabrum bases as the present pair, with the same Tuscan shield, but in their case the shield is carried on the front face of the base, instead of, as in the present pair, on the side face. The shields are now blank: they would originally have been painted over the glaze. On the side faces, where the shields appear in the present pair, they have the monogram of Christ. The form of the Tuscan shield, with its pronounced waist and scrolled apices, is of a type current in the della Robbia shop through the 1520s. In the present pair the hands of the angels are somewhat retracted, presumably so as not to obscure the shields, with the result that they appear to hold the bases insecurely. The slashing of the robes over the thighs of the present angels occurs on smaller candelabrum-bearing angels from the workshop of Giovanni della Robbia, such as a pair formerly in the Tucher Collection which carry the same square bases decorated with the same cherub heads as the present pair, and a pair placed above the doorway of the Marsili Tower in Borgo San Jacopo, Florence. The angels flank a della Robbia relief of the Annunciation above the door of the tower. According to an inscription recently removed, the relief (and presumably the flanking angels) was placed there in 1830 by the rigattiere Giuseppe Sorbi, who owned the building and named it "Casa Sorbi". The relief and the angels have recently undergone a crude restoration, and the angels are now repainted in garish colours. These smaller angels have wings, while the present pair and those in the Misericordia do not, and bear no signs that they ever did.

Gentilini has assigned the Misericordia angels to a late phase of the workshop of Giovanni della Robbia (d. 1529), dating them to about 1520.7 The present angels must be even later. They appear to have been fired at a lower temperature than was usual in the workshop of the della Robbia, and their defective, poorly adhering glazes and obviously inexpert moulding suggest that they may be products of its closing phase.