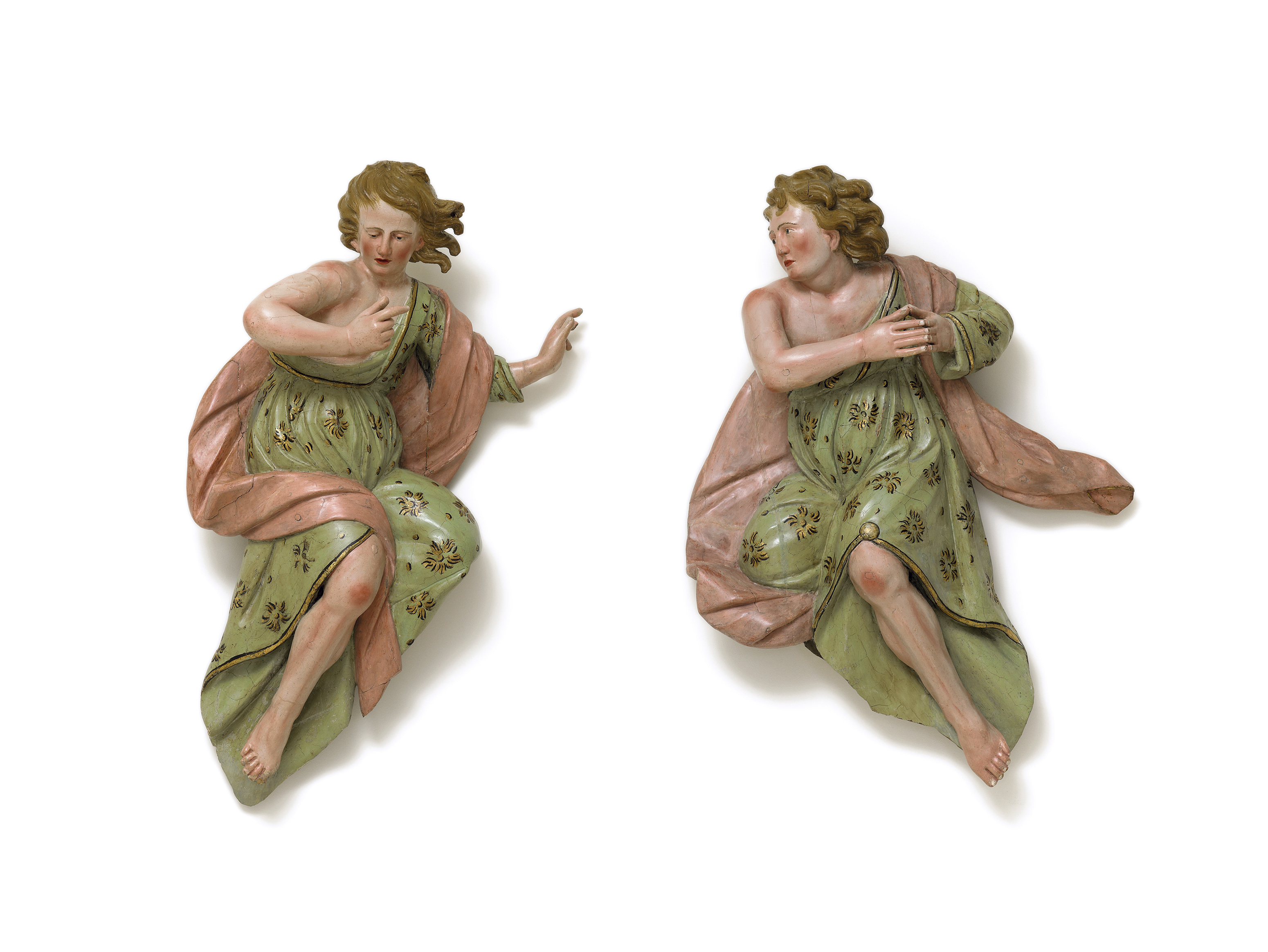 In its endeavour subsequent to the Catholic Reformation to depict the union of heaven and earth as dramatically and realistically as possible, the church discovered a highly effective aid in themes related to angels. In this respect, the iconographic trends prevalent from around the middle of the 16th century triumphed and came into their own in the 17th century, when pictorial and sculptural angels literally covered altarpieces, altars, vaults, pillars, façades and even streets and other public spaces in cities. At the same time, they became a constant source of inspiration for the mystical literature and the imagination of the many contemporary theologians, writers and visionaries intent on demonstrating the presence and participation of angels not only in the important events in the lives of Christ, the Virgin Mary and the saints but also in the day-to-day lives of men and women from all ages (whom they accompanied, aided and protected).

These two angels in the Carmen Thyssen-Bornemisza Collection are exquisite testimony to the observance of a number of iconographic conventions accepted universally and without argument by the European artists of the 17th and 18th centuries. Their irregular shapes (which require special supports or positioning), the asymmetrical effect caused when the two are placed together, and their contrasting yet compositionally coordinated poses suggest that they were intended as pendants to perform specific functions connected with altarpieces, whether as statues for acroteria above halfpediments or cornices or for flanking a tabernacle or eucharistic canopy, thus serving as a Baroque version of the two cherubim on the propitiatory of the Ark of the Covenant.

The deliberate way in which the postures of the two figures have been combined would seem to corroborate the second option. The first angel introduces the spectator to the mystery, bringing it to his attention by holding out its hands in a gesture that invites dialogue and communication. With its hands in an attitude of prayer and a rapt expression on its face, the second angel, unlike its companion, is engrossed in adoration of the Eucharist. In this way, and in their capacity as simple ministers of Divine Decision, this pair of angels performs the two great tasks assigned to such creatures by Baroque iconography –to attend and to adore– which consequently places them in two different categories: angels in action and angels in adoration. In Thesaurus Laudum sanctissimae Deiparae super canticum Salve Regina (1620), the polish Dominican historian Abraham Bzowski stressed how important angels were to the faithful as edifying iconographic references. Indeed, angels served post-Tridente propaganda in consolidating belief in the actual presence of Christ in the Eucharist because, as Bzowski said, "The very angels come to bow down before a sacrament which men have the audacity to deny."

Stylistically speaking, these are two pieces with well-designed volumes and soft modelling, with special interest taken in the precise definition of the outlines and sculptural planes. This feature was fundamental in figures intended to help set the scene in their original locations, either by standing out against the light in high areas or as independent sculptural motifs displayed alone to highlight the prominence of the most important item on the altar. The sculptor took great pleasure in using sweeping curved lines to invoke a dialogue between the natural form inherent in the dynamism and artistic treatment of the bodies and the abstract shape implicit in the folds of the garments and the arrangement of the fabrics around the master lines described by the anatomical forms. The fresh, light flesh tones are important colour nuances contrasting with the plain colours of the garments, which are painted in eye-catching pastel tones, with pink in the mantles and light green with gold fleurons in the tunics.

From the iconographic point of view, these angels confirm the criteria commonly applied in Spanish Baroque sculpture which, under the guidance of intellectuals and treatise writers, reinstated the 5th- and 6th-century teachings of Pseudo-Dionysius the Areopagite as laid down in his celebrated De Coelesti Hierarchia. This was done by Francisco Pacheco in The Art of Painting (1649) when he upheld the artistic interpretation of such creatures "of a youthful age, of 10 to 20 years, which is the median age that [...] represents the strength and vitality that is always vigorous in young, beardless angels". This explains why such sculptures reflect the Western tendency to emphasise the beauty and youth of angels by portraying them with delicate facial features and blond hair arranged into graceful, gently windswept curls. Furthermore, as regards composition, the influence on the sculptor of prints and engravings, particularly of Italian and Flemish origin, cannot be dismissed.