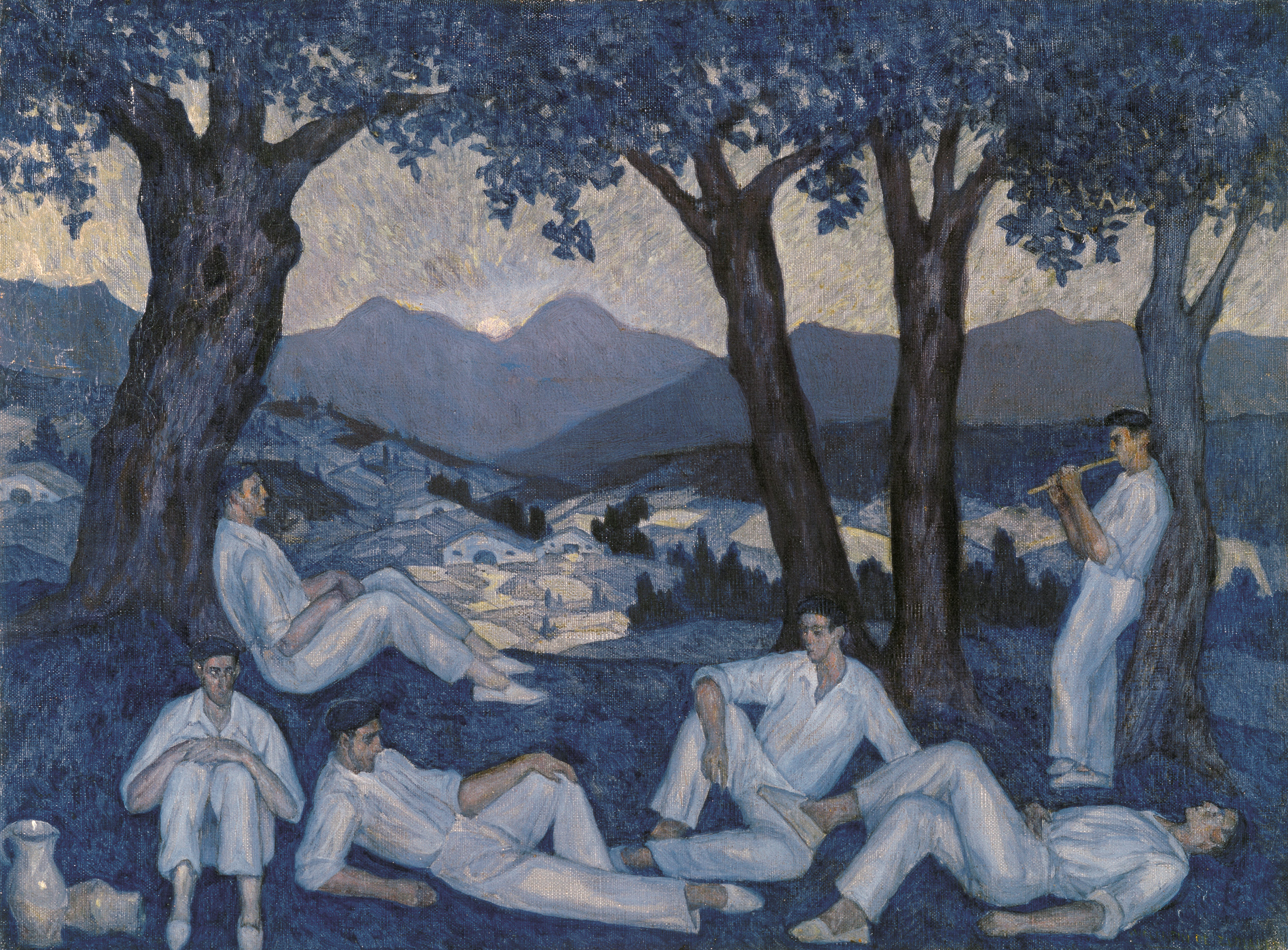 Landscape at Dusk with Dantzaris

This small painting by Valentín de Zubiaurre can be considered an archetype of Basque regionalist painting and, by extension, of the Basque people themselves at the beginning of the 20th century. Determining factors are the theme depicted (five dantzaris and a txistulari) and the facial features of the figures – particularly "racial" as they are all in profile. Another factor of course is the landscape with the typical farmhouses among cultivated fields and the wooded areas so common in Zubiaurre's paintings – as in En los prados ("In the Meadows" – oil on canvas, no date). This genre picture can also be seen as bucolic – an idealisation and mythicisation of traditional Basque rural life – not only in the theme but the sense of peace conveyed by the cold colour range, the closed composition and the apparent timelessness of the personages, a feature suggested by the peculiar way in which Valentín de Zubiaurre painted his figures – hieratic and motionless – and how (as in other pictures of his) they stand sharply out against the background, despite being depicted in the same general colour tones. The frontal view of the men and their close foreground position emphasise the creation of types, which for Zubiaurre and other regionalist artists also belonging to the generation of Alfonso XIII, became symbols of the idiosyncrasy of the Basque soul.

The tree trunks on either side of the painting close the composition laterally and form a horizontal delimiting of space also seen in other paintings by the artist. On other occasions he achieved this with standing figures or vertical elements such as oars or crosses situated on either side of the picture – as in Salida de las lanchas ("Departure of the Launches"), one of his most popular works. The four recumbent dantzaris and the foliage of the trees respectively close the composition at top and bottom while serving as a mutual counterbalance. The figures, the valley and the mountains are arranged in three superimposed bands in such a way that, despite the depth, the painting is very flat. This is another characteristic of Zubiaurre's style, and a far cry from the academicism in which he was trained. In fact Zubiaurre left academicism behind completely after discovering the European avant-garde movements in Paris when on a grant from the Biscay Council in 1912. Valentín de Zubiaurre dated few of his paintings and this one is no exception, although, from the style and theme, we assume it was painted after the date mentioned above and before 1936.

Zubiaurre probably painted this picture in his studio, as those who knew him said that he rarely painted out in the open air, preferring to use sketches from life and drawings of live models. The postures of the dantzaris, especially the one leaning slightly forward at centre of the picture, are not unique to this painting, as might at first sight seem to be the case. They are frequently used in other paintings with the same theme: for example with one of the dantzaris in Romería Vasca ("Basque Pilgrimage" – oil on canvas, no date) and other, apparently very different ones, such as Desnudos ("Nudes" – oil on canvas, no date) in which one of the bathers adopts a similar pose; and in drawings such as Espatdanza ("Sword Dance", pencil on paper, no date). They are postures linked, of course, to the depiction of female nudes in Western painting since the Renaissance.

This picture is another work in Zubiaurre's production in which cold colours again typical of his output (blues and greens above all) predominate, as opposed to the warm colours preferred by his younger brother Ramón, who was also a painter and, like Valentín, deaf, although the latter was also non-verbal. The two brothers were able to compensate their disabilities through education and great personal sacrifice. They shared successes and awards, above all in the period between the end of World War I and the Spanish Civil War of 1936–39. Valentin's cold colours are scarcely affected by the warm ones elsewhere in the painting, as in some of the skin tones, the pitchers (still-life-type objects commonly found in his painting and used to offset colours), and the valley with the sky behind the mountains silhouetted in the background forming a high horizon, particularly where the sun sets behind the pass. The painting was executed with very thin pigment (although in some areas it was applied more thickly), leaving parts of the priming and even the weave of the canvas visible.

Landscape at Dusk with Dantzaris