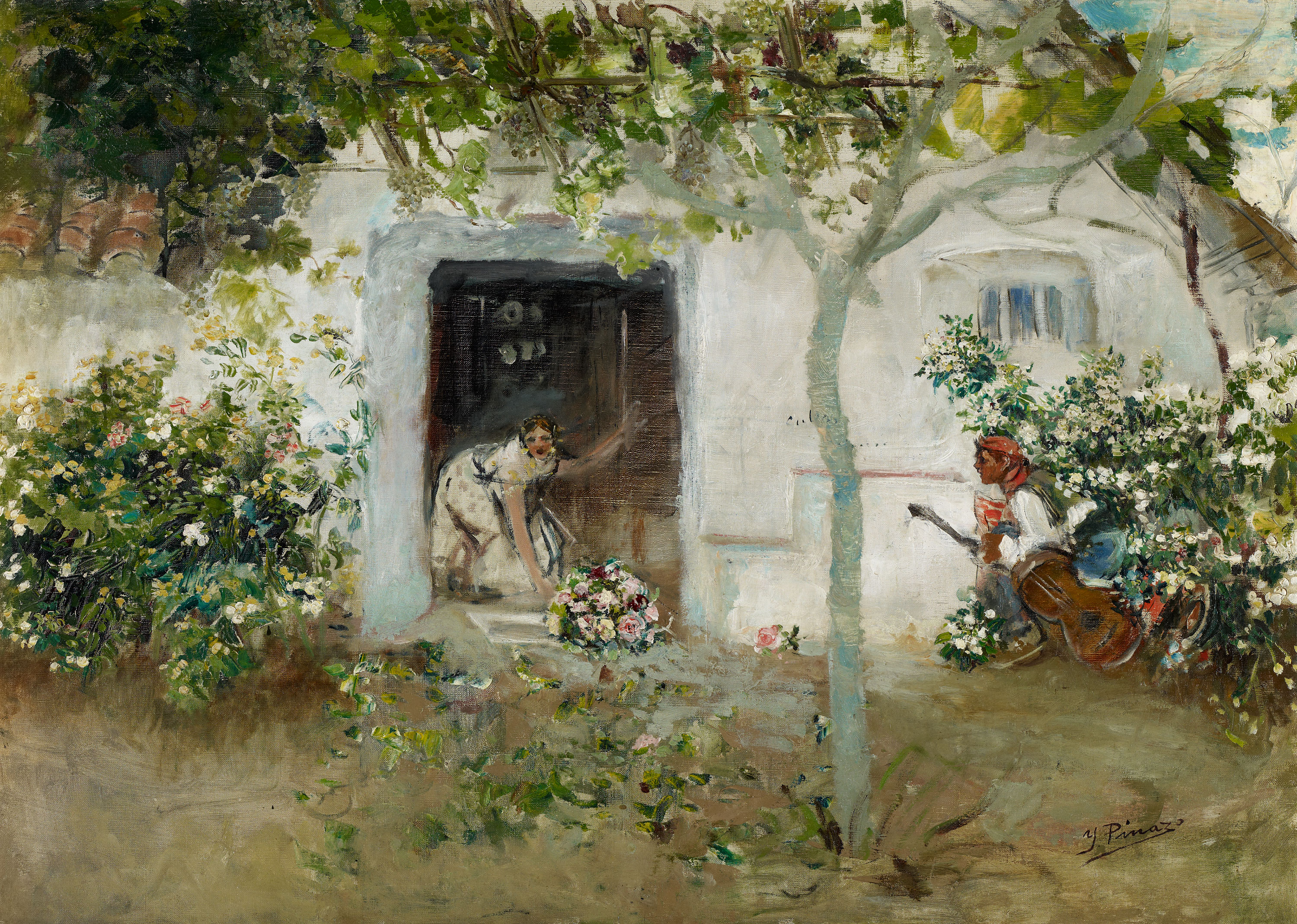 Floral Offerings, which may date from the late 1890s, depicts a fantasy inspired by the Valencian genre painting of the turn of the 20th century.

During his lifetime Ignacio Pinazo was famous for his pictures of scenes of local customs. Many of his contemporaries, including Sorolla himself, knew anecdotes about this painter and his predilection for popular events: fairs, markets, picnic teas on the beach, typical spots in Valencia, etc. These anecdotes were passed down across the generations with the result that Pinazo is now viewed as a realist painter who systematically transferred scenes from everyday life to canvas or panel. However, there is no reason to doubt the accuracy of those anecdotes, as many of Pinazo's paintings confirm this view. Yet not all of his pictures can be judged in the same way and this painting is one of those. In it realist and symbolist elements merge via an overpowering urge on the painter’s part to define space through the use of colour and the interplay of light and shade. The clothing of the two figures in the picture reiterates many of the conventional beliefs of how Valencian country folk were supposed to dress. However, despite that starting-point, this is obviously a reference to real life. Here the realism centres not only on the characteristics of the building and the flowering bushes before the façade of the modest dwelling but also on the theme itself. This is a representation of the albas (serenades at dawn) common among Valencian country folk and one of the more customary ways of courting young women – as is confirmed by the subtle lighting reproducing daybreak.

When he painted this picture, Pinazo had settled permanently in Godella, despite holding a teaching post at the School of Arts and Crafts in Madrid, and it was from this time on that he produced his most personal and least conventional works. These are generally small canvases or panels with genre or anecdotal themes set in Valencia. Nevertheless, the most important aspect of these paintings does not lie in the theme but in the extraordinary amount of research they reflect regarding colour, light and systems of non-linear composition. Paintings such as Interior de alquería ("Interior of a Valencian Farmstead", c. 1899, Valencia Museum of Fine Arts) also reflect Pinazo's thematic, compositional and technical research in a very similar way to Floral Offerings.

Technical freedom and compositional simplicity can be said to characterise this picture, as tended to be the case in Pinazo's later period. The composition is divided into horizontal and vertical lines. Two thirds of the surface of the canvas are filled by the whitewashed façade of the rural abode. Space is defined by the trunk of the grapevine in the foreground, at a point two thirds away from the left side. The branches in the upper area and the door opening onto the darkness inside the house complete the spatial arrangement.

The somewhat peculiar compositional system of expanding space by including an open door to allow a view of several inner rooms was very common at that time. Pinazo himself often used it, as for instance in Interior de alquería mentioned above, as did Joaquín Sorolla in Selling Melons.

The female figure in the open doorway stands out clearly against the darkness of the interior as she bends to pick up the bunch of roses someone has left on the ground outside. In spite of the gloom, a dresser for kitchen items of the kind commonly found in rural dwellings can be glimpsed inside. The composition also includes other features typical of this kind of genre painting: the clothing and headwear of the two figures, the guitar, the rural architectural elements (the small Arabic-style roof tiles at upper left and the heavy diagonal line at upper right suggesting the roof itself), the unusual garden layout in front of the house in the form of large masses of flowering oleander on either side of the door, and the very realistic bunches of grapes hanging from the vine. The whole is unified by the inclusion of another clearly realist element – light – which is consistent, clear and at the same time soft, and situates the scene early on a spring morning. As regards the selection of colour range, various shades of white and green help to stress the coolness of the morning air while reinforcing the symbolism of innocent young love.

In short, the composition displays a variety of meanings which prompt different interpretations or readings. First, some elements of the theme, composition and light underline the narrative of the painting, which can only truly be understood with knowledge of the popular literature of the period. In fact, the composition can be interpreted as the representation of a specific aspect of everyday life in the Valencian countryside, developed in an idealised, anecdotal manner. On the other hand, the painting can be viewed symbolically as an allegory of young love, spring, the fruitfulness of nature and the exaltation of the senses during this season. Nevertheless, at the same time Ignacio Pinazo used all these aspects to undertake further technical research, applying light dabs of paint to the canvas to suggest a world of instincts and emotions whose details and development the spectator would have to provide himself.