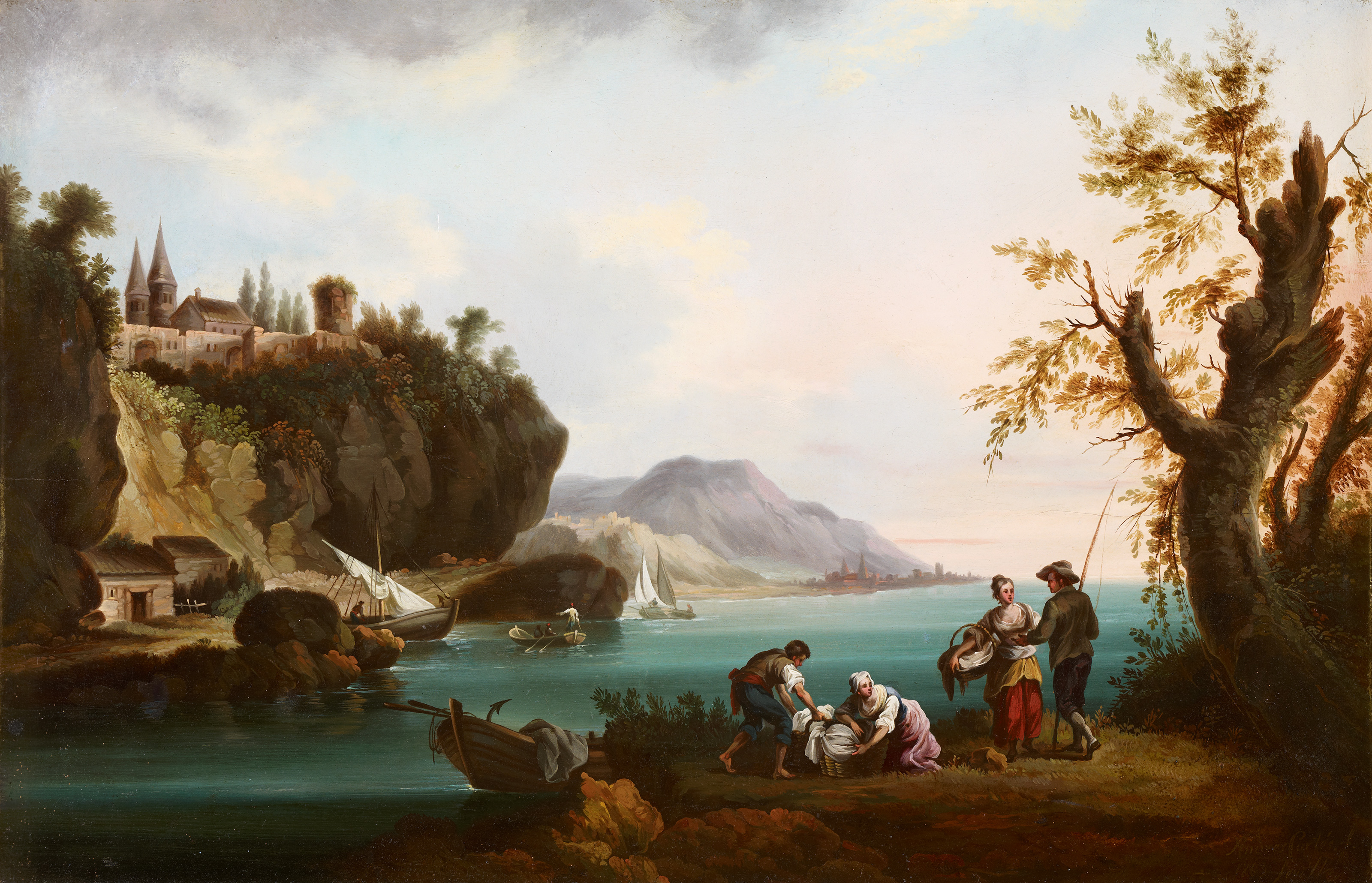 Washerwomen and Fishermen in a Coastal Landscape

Like Manuel Barrón, Andrés Cortés belongs to the first generations of Sevillian Romantic painters who came into contact with the foreign artists who arrived in the city to spread knowledge of the prevailing aesthetic tastes in Europe. As a result of this influence they embraced diverse genres but above all landscapes with figures which recalled Baroque stage sets imbued with a certain rustic, picturesque air, craggy heights and old buildings in ruins in the manner of Italianate Dutch painters of the 17th century. These pictures were often infused with a revitalised Murillesque sensibility.

These Sevillian painters commonly depicted such scenes in small works, often in pairs, which they sold to foreign travellers – mostly English – and also to members of the city’s wealthy classes.

In this pair of fanciful landscapes with figures – somewhat idealised everyday scenes of common folk – Cortés attaches equal importance to the delightful panoramic views and to the figures that populate them. Both works, in landscape format and almost identical in size, are appealing for their idyllic bucolic beauty as stereotypes of an image that is more romantic than real. The man takes pleasure in nature, an inherited gift in which he feels fulfilled alongside the woman, with whom he shares his enjoyment of the surroundings and goes about his daily work calmly, optimistically and lovingly.

The work is set in an imaginary place inspired by some print and consisting of three horizontal planes that represent land, water and the sky respectively. The main figures are located in the foreground, on the riverbank: the washerwomen with baskets of clothes; and the fishermen who help them with their chore. They wear what had been typical attire since the 17th century: the women voluminous dresses; and the men jackets, breeches gathered at the calf with gaiters, and hats. They are flanked by a sturdy tree and a moored boat with oars and an anchor. The expanse of crystal-clear water could be a wide river, or most likely a sea inlet crossed in the middle ground by barges with white sails and small rowing boats. Distinguishable in the background, at the foot of a mountain, is a picturesque coastal town with high cathedral towers. At the top of a steep wooded hill on the viewer’s left is a sleepy walled city in which two cylindrical towers crowned with sharp spires stand out. The setting is lit by a brightly coloured sweeping sky with fluffy clouds.

Washerwomen and Fishermen in a Coastal Landscape