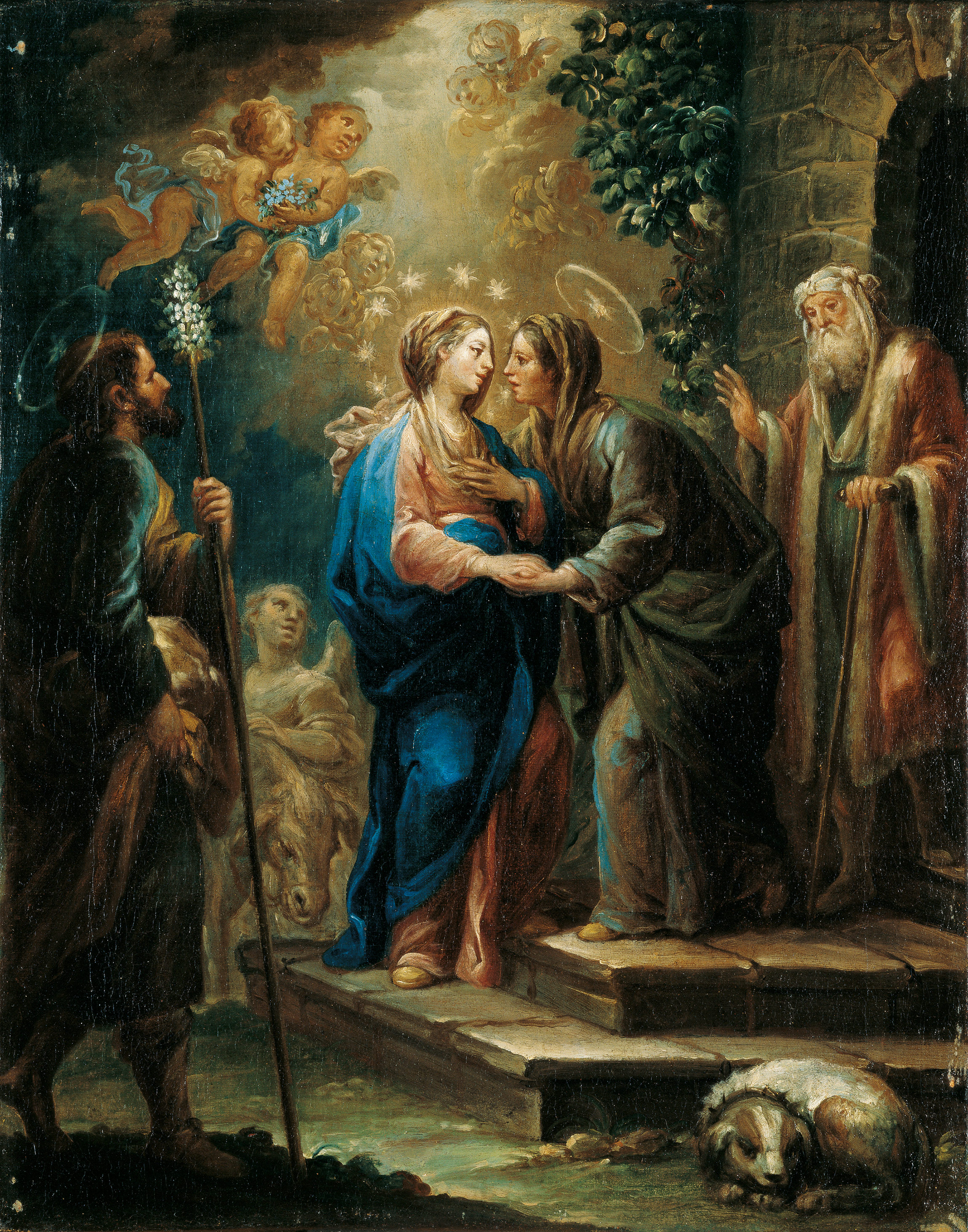 Judging by their size, these four canvases, which share the same measurements and provenance, must have belonged to a series executed for a private oratory, as cycles of this kind were usually painted for clients who wished for endearing and familiar themes for their intimate prayer. They are a very good example of the style of painting that prevailed in the early 18th century, when the decorativeness and formal dynamism of the High Baroque were still in vogue, although a new aesthetic sensibility was making its appearance in a more delicate language and smaller and more fragile figures, heralding what would be the subsequent Rococo style. A complete in-depth study has yet to be conducted to establish the boundaries between Baroque tradition and the new 18th-century aesthetic ideas and to examine the contributions of the many painters trained in the previous century who were active at the time. One such artist is Ezquerra, who is largely unknown and whose style displays evident similarities with that of the present works, which were recently attributed to him. Trained in Madrid during the reign of Charles II, especially in the circle of Carreño, he possesses a deft technique and uses a vivid, warm palette in compositions that are still linked to the early tradition and generally inspired by prints of the Flemish and Italian schools. His painting, which may be considered a consequence of that of some masters active in the earlier period, such as Francisco Solís, José Moreno and Claudio Coello himself, evolved towards a more delicate sensibility of softer hues, like that of Miguel Jacinto Meléndez (see Santiago Páez 1989), one of the most extensively studied artists of the period.

Cycles of paintings on the life of the Virgin were very common in 17th–century Spanish art, but the present set is clearly related to Madrid on account of a specific iconographic detail, as the research scholar Ángel Aterido rightly points out. In all these scenes the Virgin’s head is surrounded by a halo formed by the twelve stars of St John’s vision in the Apocalypse, as if it were a representation of the Immaculate Conception, whereas the other figures display the usual halos of unbroken lines. In the case of Mary this distinction is based on devotion to the Immaculate Conception and was very common in Madrid painting during the reign of the last Habsburg king, as can be seen in Marian works by Francisco Rizi, Escalante, Antolínez, Cerezo and Claudio Coello. Although the Spanish monarchy did not succeed in having Rome proclaim the Immaculate Conception of Mary to be a dogma of faith, it went to great lengths to promote the related cult and depictions. This effort by the crown and the official sectors of the Church led some of the characteristic iconographic attributes of the Immaculate Conception to be included in other Marian themes, as in the present case, especially in the court environment. The cycles of prayers dedicated to the Virgin also played a special role in this process, such as the Dominican and Franciscan rosaries and the Stellarium. The latter, which was based on the crown of stars of the Immaculate Conception, was banned in public in 1640 but not in private prayer – the use for which this set of works must have been intended. These series sometimes consisted of twelve scenes, one for each star, with each illustrating one of the twelve gozos or sung poems of Mary, just as each star reminded the believer to pray a Hail Mary.

The theme of the Visitation represents the visit paid by the Virgin, pregnant with Jesus, to her cousin Elizabeth of Hebron, who is also pregnant with Saint John the Baptist, the Forerunner, to find out the truth of the words spoken by the archangel Gabriel in the Annunciation. The source for this theme is a passage from the Gospel of Saint Luke (1:39–56): “In those days Mary arose and went with haste into the hill country, to a city of Judah, and she entered the house of Zechariah and greeted Elizabeth. And when Elizabeth heard the greeting of Mary, the babe leaped in her womb; and Elizabeth was filled with the Holy Spirit and she exclaimed [...]: ‘Blessed are you among women, and blessed is the fruit of your womb!’”

The iconography of the Visitation is basically a scene featuring two people of the same nature – i.e. human – in which the predominant feature is the meeting, the two women’s embrace. As in the present case, unity and a certain symmetry prevail in the composition. The theme is always depicted outdoors, outside Elizabeth’s house, and the two husbands, Joseph and Zechariah, are not necessary present. In this work the elderly Zechariah is depicted dressed in Hebrew clothing, coming out of his house, and on the left, leaning on the flowering staff, is St Joseph, behind whom the figure of an angel is visible in addition to a donkey in allusion to the Virgin’s trip to meet her cousin. Bossuet interpreted the theme allegorically, taking Mary and Elizabeth to be symbols of the Church and the Synagogue, which join hands in felicitous understanding.

Although, according to the Gospel passage, the two women ought to appear of different ages, such a distinction is not found in the periods in which aesthetic idealisation was a prevalent concern. Such is the case in the present work, as 18th-century painting sought chiefly beautiful and pleasing depictions and was rarely inclined to images of old age. Also belonging to the pictorial language of the period is the delicate shaping of the figures and the predominance of soft, luminous colours applied in fluent brushstrokes learned from the Madrid school of the late 17th century and from the artist’s relationship with Carreño.

According to Ángel Aterido, the women’s embrace is inspired, with some variants, by a print by Carlo Maratti, by whom Ezquerra owned numerous works according to the inventory of his possessions published by Mercedes Agulló y Cobo (1996).