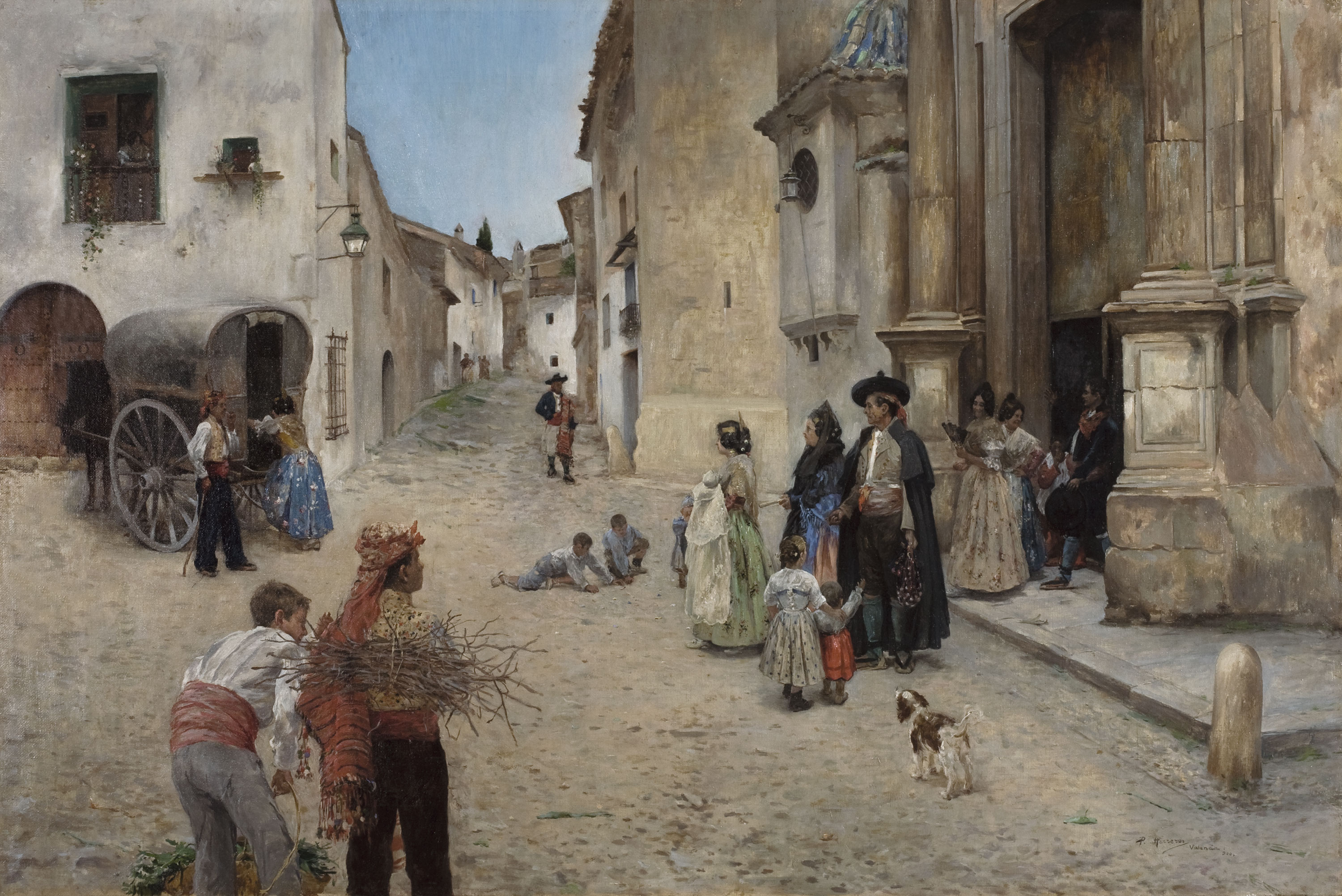 Coming out of Church

In the Valencian art of the late 19th century, the précieux style came more and more to reflect the influence of genre painting, whose favourite themes were idyllic moments and scenes of rural life. The beauty of Valencia's fertile Huerta region and its inhabitants and countryside became repositories for the defining characteristics of folk who shunned the excesses of progress and the imbalances resulting from the effects of the industrial age on modern life. The tension of fin-de-siècle social reality was countered by an art that explored the customs and habits of country folk. It was based on the concept of an exquisite form of painting, a balance between gesture and realism, capable of simultaneously capturing essence of character and atmospheric qualities.

It is at that exact point in time where this painting by Prudencio Herreros Amat can be situated. Entitled La salida de la iglesia ("Coming out of Church"), it depicts a crucial moment in the rhythm of everyday life and a theme common among contemporary painters who were attracted by scenes in the life of certain villages in the Huerta region. Such painters include José Benlliure, whose The End of Mass at Rocafort (Valencia Museum of Fine Arts) is a forceful execution with a wealth of descriptive detail vis-à-vis form and sentiment, and Ignacio Pinazo, who, in his Godella sketches, succeeded in capturing the sound and vibration of crowds of people through gestures and splashes of colour that set modernity in motion. These artists were two extremes on the aesthetic horizon of Valencian genre painting, of which Herreros Amat's work was also a part.

This composition places us in the right-hand corner of a plaza that opens out onto a small, winding, upwardsloping street lined on either side by low-roofed houses with the semi-circular doorways and whitewashed façades so typical of Huerta neighbourhoods. A crossing of compositional lines enables us to view a scene with various figures who are witnesses to a festive occasion – a christening. With her baby, dressed in the traditional ivory-coloured gauze and lace gown, in her arms, the mother leads the group out of the church. She is followed by the godparents and relatives, who are about to move towards a cart that will take them to celebrate the event. The scene shows the exact moment when the godfather performs the ritual of throwing sugared almonds to children who, drawn by the calls of the relatives and the sound of the bells, have come to pick up the delicious sweets.

As this is a holiday, they all wear their best Valencian silk, lace and mantillas. An ideal kind of brush stroke, wisely judging the impasto for the colours and precisely defining forms and textures, is combined with a swift, imprecise execution to create the effect of the transparencies of the garments and even a sensation of depth in figures in the background created with simple splashes of colour. With his masterful technique, Herreros Amat performed an exercise in exhaustive description of the local people and their apparel in the manner of Valencian masters like Bernardo Ferrándiz, Joaquín Agrasot, Vicente Castell or Puig Roda. The women wear long-sleeved satin or velvet bodices and full skirts with gay floral patterns, complemented by fine tulle shawls with delicate gold and silver embroidery which serve as aprons or are knotted close to the body, while the godmother wears the typical three-piece black costume with a blue shawl. The finishing touches to this mise-en-scène are the jewels, adornments and the traditional hair-style of three buns held in place by pins and a decorative comb.

Of all the figures, it is the godfather whose farmer's garments are the most elaborate, with his bluish-grey breeches, light-coloured jacket and shirt with lace on the front and customary sash wound around the waist. Additional garments are espadrilles tied at the ankle, stockings with green bands, and a rodina, the typical low-crowned, black velvet hat worn with a knotted kerchief cua darrere for feast days.

All these details make of this work a visual testimony of customs and, together with the X-shaped method of composition enabling a convergence of various groups, turn the anecdote into an element capable of enhancing any account of an everyday event.

In addition to the general theme of the Huerta region folk there is also a reference to farm work through the labourers holding produce and the flirtation scene in which the girls outside the Baroque door of the church rebuff the advances of the young farmhand with grace and feigned nonchalance. Their jocular remarks are interrupted by the appearance of an altar boy from within who seems to be making signs for silence.

This interplay of elements makes of Salida de la iglesia a key work in the artist's career and a painting comparable with another entitled Bautizo Valenciano ("Valencian Baptism") presented by Herreros Amat to the Infanta Isabella (nicknamed "Snub-nose") which won him the title of "His Majesty's Gentleman".

Coming out of Church