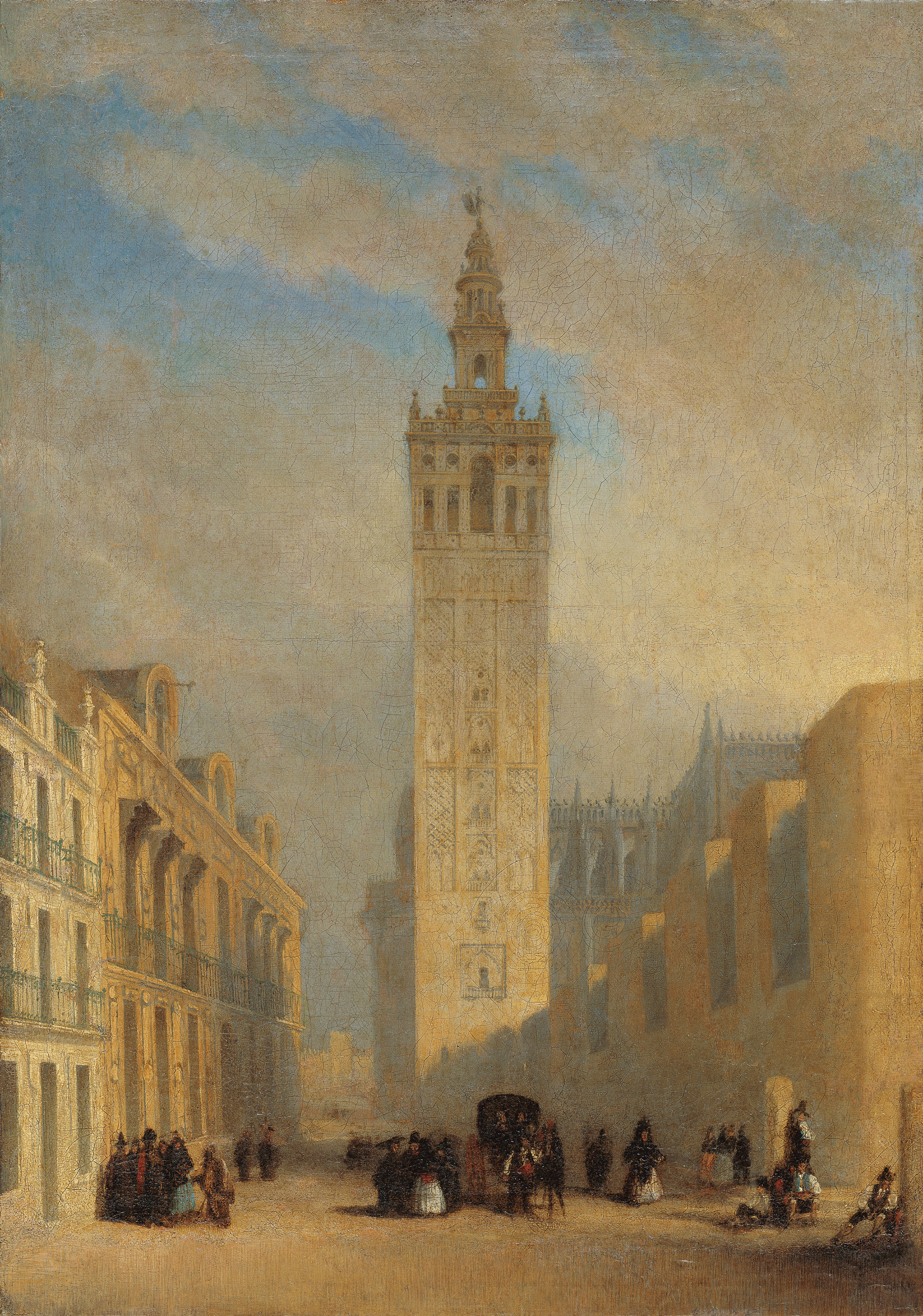 The Giralda viewed from the Calle Placentines

All the Romantic vedutisti who painted urban panoramic views of Seville were irresistibly seduced by the svelte, majestic silhouette of the Giralda, the minaret of the city’s former Arab mosque built at the end of the 12th century, to which a graceful five-storey bell tower was added in the 16th century. The tower is topped with a huge bronze weather vane featuring the figure of Faith that is popularly known as the “Giraldillo”3 on account of its revolving nature [“girar” means to revolve]. It has given its name to the whole tower, which became the bell tower of the new Gothic cathedral and the city’s main landmark.

Many Romantic artists painted the Giralda from different viewpoints, always with its surrounding buildings and streets populated with passers-by. These figures are depicted with a picturesque exoticism that was largely encouraged by the French and English travellers, both painters and writers, who visited Seville in the first decades of the 19th century.

The present painting may be considered a replica of one belonging to a private collection in Seville that is practically identical in format and is signed by José Domínguez Bécquer and dated 1836.4 In addition to being depicted from a slightly lower viewpoint, as the rose window of the cathedral crossing is concealed from view, a few decorative details of the architecture are more briefly executed in the present painting, such as the jagged battlements of the gallery of the Patio de los Naranjos, which stands on the far right. Other details are missing, such as the bars on the ground-floor windows of the archbishop’s palace, whose façade is visible on the other side of the street. But it is in the figures walking along the streets that the differences between the two paintings are most obvious, in both number and arrangement and above all execution, as here they are much vaguer, owing perhaps to changes in the pigments with which they were painted.

Nevertheless, the canvas is a handsome testament to Bécquer’s skill at monumental views, rendered with a sober and restrained Romanticism that is highly objective in the minute, almost archaeological depiction of the decorative features of the architecture. He uses a refined palette of soft glazes that envelops the buildings in a faint, dense crepuscular atmosphere that is the painting’s most appealing feature.

In addition to these two versions by José Domínguez Bécquer, the great master of British Romantic landscape painting David Roberts (1796–1864) had painted a delightful view of the Giralda back in 1833 from the same spot. A print of the same view was made that year by E. Finden after a drawing by John Frederick Lewis (1805–76) to illustrate W. Brockendon’s Finden’s Illustration of the Life and Works of Lord Byron.

In 1838 José’s cousin Joaquín Domínguez Bécquer (1817–79) also painted a view of the Giralda from the same street where a procession was taking place;7 this view would likewise by lithographed by Adrian Dauzats (1804–68) that year in order to illustrate the publication entitled Álbum sevillano. Colección de vistas, trajes y costumbres andaluzas and by the great master Genaro Pérez Villaamil for one of the plates of his España artística y monumental .

The Giralda viewed from the Calle Placentines