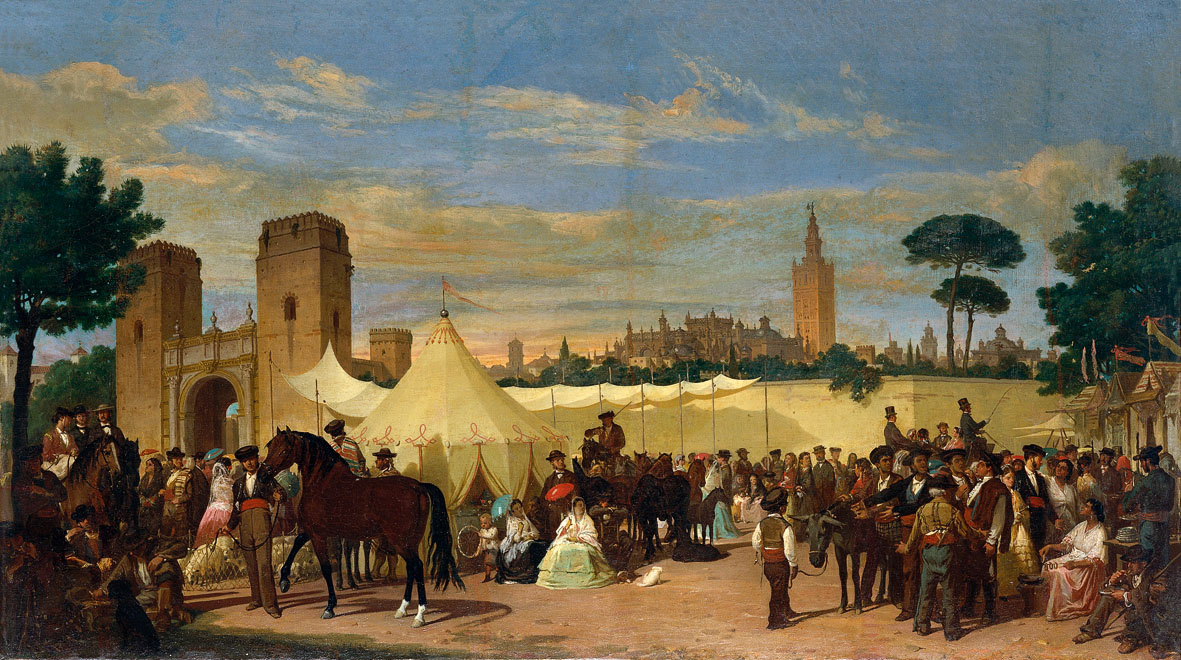 Of all the festivities celebrated annually in the city of Seville, Holy Week and the Seville Fair, better known as the April Fair, were those that most caught the attention of 19th-century genre painters. They depicted the most picturesque aspects of these two events, which continue to be the most important fiestas in the Andalusian capital to this day on account of their colourfulness and outstanding drawing power.

The Seville Fair was an initiative of the industrialists José María Ybarra and Narciso Bonaplata, who on 25 August 1846 proposed that the council start up a livestock fair for “cattle, sheep and horses” the following year that would also include festivities for the general public and be held with the “pomp and ceremony that such an important event deserves”. And so, from the outset, the mercantile nature of an agricultural and livestock fair was combined with the bustle, fun and show of a popular celebration that was captured by the Romantic artists and lives on to the present day.

The fair stretched out along the Prado de San Sebastián outside the city walls, where traders and exhibitors set up their marquees and people from all walks of life flocked to the avenue to savour local produce and sing and dance as at an open-air festival in which the differences in visitors’ social status were nevertheless clear.

Bécquer’s attractive painting is a delightful testament to all this. It shows the San Fernando gate built into the city wall, peeping out behind which are the trees of the gardens of the Reales Alcázares and, in the background, the city buildings with the cathedral and the Giralda towering imposingly and powerfully above them.

Outside the wall the traders and exhibitors have set up their stalls, marquees and awnings. Several ladies and gentlemen belonging to high society ride in carriages or on horseback so as not to mingle with the common folk. On the far left, some livestock dealers are about to tuck into a stew in the shade of a tree. Beside them, another dealer shows off an Arab horse he is selling, followed by a row of multi-coloured stalls outside which a woman fries and sells buñuelos or fritters and others attempt to palm off a battered-looking donkey on a naïve buyer.

In this delightful festive scene of Sevillian life, Joaquín Domínguez Bécquer clearly demonstrates his skilled painterly observation of the different human types who visit the fair. He depicts them with colourful and anecdotal detail, creating a powerful narrative effect that irresistibly attracts the spectator’s attention.

This artist had painted another view of La Feria de Sevilla (“The Seville Fair”) in 1855, almost from the same angle though with a different format and composition, in which all that is repeated is the figure of the fritter seller. The best known panoramic views of this popular festivity are those painted by Andrés Cortés y Aguilar (1810–79) and Manuel Rodríguez de Guzmán (1818–67).

The painting should be dated to the same year as its companion piece, Dance outside a Country Inn, which is identical in format and nature and signed in 1867.