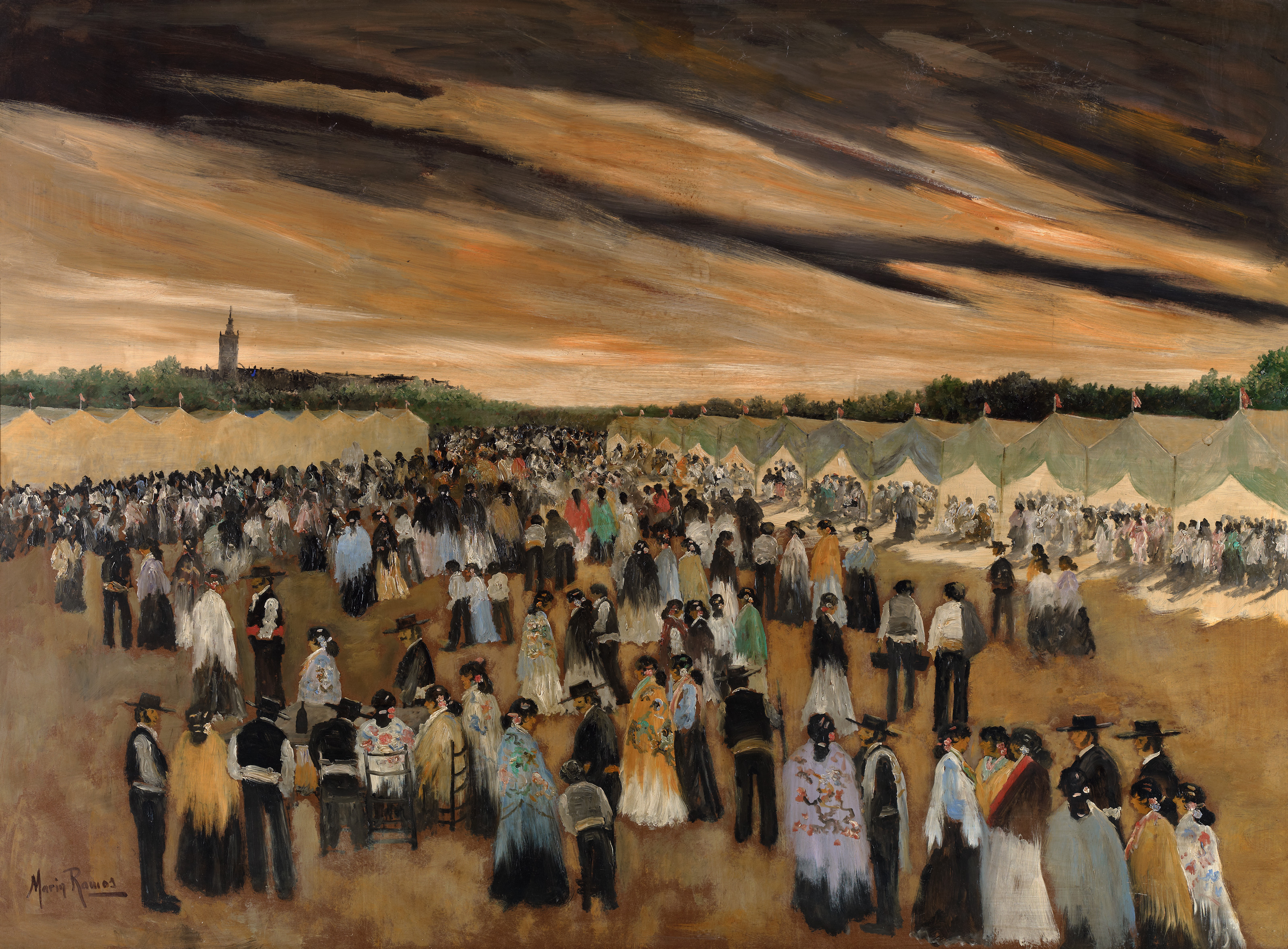 Over a large area, delimited by lines of marquees known as casetas, crowds of small, colourful figures in typical regional dress gather, the women in gorgeous, assorted plain or printed shawls, the men in waistcoats or boleros and Cordovan hats. The trees, barely appearing above the perspective lines of the tents, are more visible towards the centre, where the esplanade begins. They mark the skyline, whose horizontality is only interrupted by the vertical form of the Giralda, the inevitable landmark and iconic reference point for this popular festive event. From one point on the Prado de San Sebastián, where the fair was formerly held, the buildings and the legendary Almohad minaret would have appeared on the left. Moreover, if this version by Marín Ramos is compared to other paintings by Andalusian artists in the Museo Carmen Thyssen Málaga Collection – for example at the fair by Rafael Arroyo Fernández (an artist born in 1860 whose life is documented until 1908) – it can be seen that although Marín’s work is taken from a higher angle compared to Arroyo’s ground-level viewpoint, the perspective of the casetas on the right in both cases – although these are closer together in Marín’s – makes identification of the same esplanade possible and consequently also situates the Giralda to the left.

The multi-coloured effect achieved with daubs of flat colour and abundant whites, as well as other colours such as green, yellow, pink, mauve and violet – plus that of the beautiful artificial light emanating from the casetas with their open curtains – is reminiscent of the bright, clean features of enamel. To a certain extent, this is an aesthetic related to that of the Gibraltar painter Gustavo Bacarisas (1872–1971), an artist who based his work, however, on a concept of broader spots of colour, i.e. with shapes larger than those seen here, and displayed a more highly-developed artistic culture, due to having assimilated – thanks to his cosmopolitan lifestyle – the decorative methods of the Post-Impressionist legacies of Symbolism, Expressionism and Fauvism. One might even go so far as to say that there is something of all this in Marín Ramos (he lived in Paris from 1911 to 1915), but without Bacarisas’s power and inspiration.

Indeed, the impression of the evening glow in the clouds and sky in the light of the setting sun, produced by means of large bands of yellow and orange (not so far removed from Munch’s blood-stained skies and characteristic of other paintings by Marín) were to follow that direction. As examples of these aesthetic characteristics, we might cite another of Marín Ramos’s paintings, Feria de París (“The Paris Fair”), whose mainly female figures have unclear outlines but are conceived of as large coloured areas (flat colours although with streaks to suggest different nuances) reminiscent of enamel as a technique, and correspond with an attempt to produce similar impressions – and, indeed, the effect of the glow in the sky is repeated. Displaying even more astonishing modernity based on the same stylistic methods is En el cabaret (“At the Cabaret”), also known as Bailaoras (“Flamenco Dancers”) and Tablao. This painting recalls the statement made about the painter in his lifetime by José Cascales y Muñoz that at first glance, all one sees is a blur with a few indefinite spots, but that, if one keeps looking, “confused shapes of figures” can gradually be made out which finally become “perfectly detailed”. Cascales’s words do in fact accurately describe the magic in the process of looking at one of Eustaquio Marín Ramos’s works. Shapes indeed slowly begin to show through, as in the now virtually obsolete process used for developing old-fashioned photographs by placing the film in a tray of liquid in the darkroom. In other words, the spots or silhouetted colour surfaces reinforce the enchantment of the scene. Something that is suggested is “filled in” by our capacity to understand the phenomenon. In the panel – of whose three names we have chosen Bailaoras as it was the one used first by José Francés in 1915 in relation to the work and the painter – there are no spatial references (unlike The April fair) and it is only the technique with the sky and the bands of pale yellowish colour – that of the sun’s last radiance after falling below the horizon – that enables us to situate ourselves within a specific space.

Having said that Marín Ramos’s themes – like those of Bacarisas and Hohenleiter, the other members of the Seville School – include festive scenes from Holy Week and the April Fair, and above all from flamenco tablaos, we should mention that the same aspect of the April Fair featured in this painting was also covered in one of the painter’s two entries for the 1917 National Exhibition. Measuring 81 x 100 cm, it was listed in the official exhibition catalogue as number 316 and entitled Feria de Sevilla (“The Seville Fair”). The catalogue also stated that the painter came originally from “San Lúcar” la Mayor and that his residence was 65, Segovia Street, Madrid. We might add that the last time he had competed at the official event – at the 1906 “General” Exhibition of Fine Arts – in the catalogue he had only been described as a native of Seville and no reference at all had been made in the customary biographical notes section to his teachers, artistic training or even his address in Madrid.

We would like to conclude by saying that the extremely popular theme of Seville’s April Fair in Andalusian genre painting is very well covered in the Museo Carmen Thyssen Málaga Collection. In this respect, in addition to The April fair and Rafael Arroyo Fernández’s At the fair mentioned above, we might also cite At the Seville fair (c. 1855) by Manuel Cabral Aguado Bejarano (1827–91), The Seville fair (1867) by Joaquín Domínguez Bécquer (1817–79), Courting at a Rosquilla Stall at the Seville Fair (1852) by Rafael Benjumea (born c. 1825 and documented until 1887), El Real de la feria (“The Real de la Feria”, c. 1900) by Mariano Obiols Delgado (born c. 1860 and documented until 1900), and even in this category the above-mentioned Gustavo Bacarisas’s (1872–1971) The Fair.