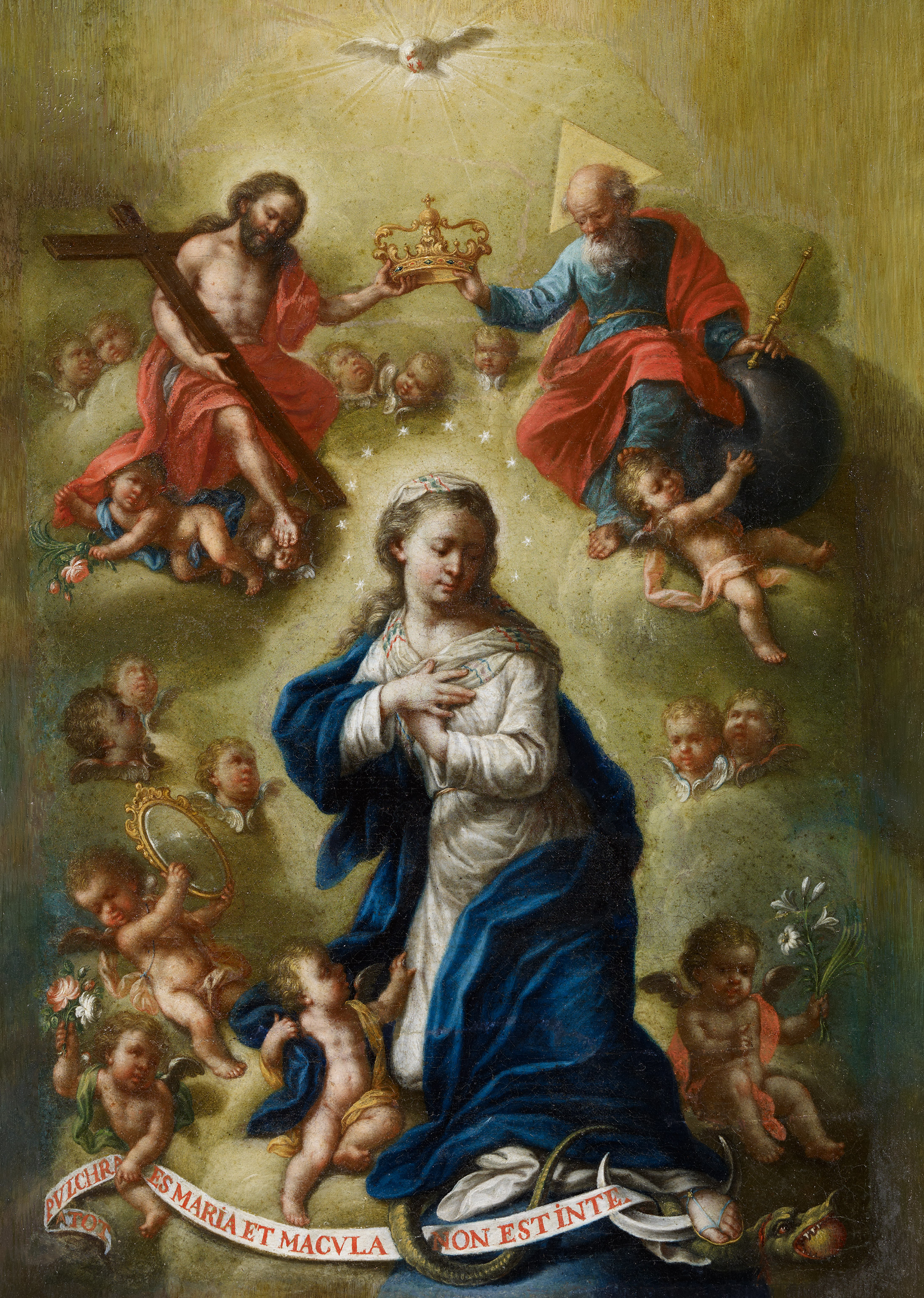 The Coronation of the Virgin

Although Marian devotion was deeply rooted in the Spain of the Modern Age, it was particularly present in the religious milieus of Seville in the 18th century as a result of the intense influence of Murillo’s creations and also owing to the existence of a fervent popular cult that was expressed in small works intended for private devotion. Lorente, an admirer and follower of Murillo, devoted much of his output to works of this kind such as the one shown here, to which his delicate and appealing 18th-century style was ideally suited.

The central focus of the composition is the figure of Mary who, kneeling in a rather unnatural pose, takes up more than half of the scene. She is dressed in a white tunic and blue cloak with her head surrounded by twelve stars and “clothed in the sun and with the moon under her feet”, as in St John’s vision in the Apocalypse. A choir of angels and cherubim makes up the celestial court that surrounds her body, which stands out against the light emerging from an opening in the heavens. The associations with the Immaculate Conception are accentuated by the presence of some of the attributes of the litanies of the Rosary held by the angels, such as the roses and lilies – a symbol of purity – and the mirror of justice which denotes her exemplarity. One of her feet treads on the head of the serpent whose teeth clasp the apple of evil, illustrating the words of Genesis: “I will put enmity between you and the woman, and between your seed and her seed; it shall bruise your head.” Completing the lower area is a ribbon scroll bearing the words: “Tota Pulchra es Maria Et Macula [Originalis] Non Est In Te.”, an allusion to her immaculate conception in an expression taken from the Song of Songs, an Old Testament book. This iconography of the Virgin tota pulchra predates that of the Apocalyptic Virgin, which was not defined until the 17th century, although it is not unusual to find examples of the combination of the symbols of both in this and the 18th centuries, as in the present work.

In the upper part is the Holy Trinity represented by the figures of the Father, with a triangular halo denoting God as one and three, the Son accompanied by the cross of his martyrdom and the dove of the Holy Spirit. They welcome Mary into paradise and crown her with a rich crown adorned with precious stones as queen of the heavens and earth.

This rich iconographic representation, which today’s viewer might find rather confusing, was easily interpreted in the period, as proven by the use this small work must have had: a familiar and common devotional painting. Lorente was a skilled painter who used repertoires of prints to produce compositions of this kind, which he no doubt repeated fairly frequently. This would appear to be proven by the fact that there is another signed version that is almost identical except for the scroll. It was initially painted for a chapel known as the Postigo del Aceite in Seville and later belonged to the Revilla Collection, from which it passed to the Madrid market.

The Coronation of the Virgin