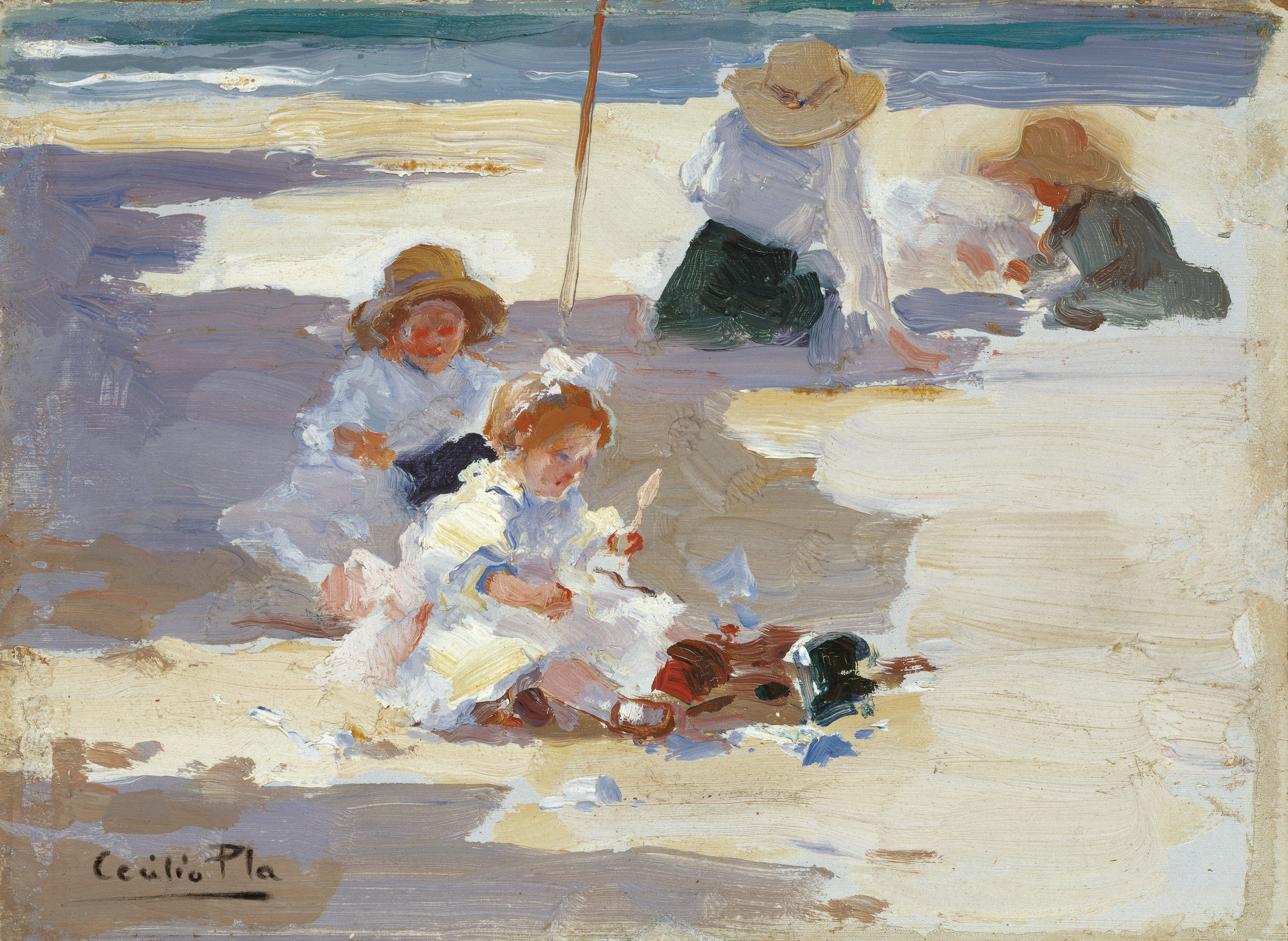 Playing on the Beach

In Cartilla de Arte Pictórico: primera enseñanza artística ("A Primer of Pictorial Art: First Instruction in Art") of 1914, Cecilio Pla wrote of some of his chief preoccupations concerning artistic composition.1 Expressed in very simple, clear and direct language, and with practical recommendations, this book also reveals the Valencian painter's talents as an educator. In his primer Pla clearly states that the artist should paint from life. He also discusses technical issues such as the importance of backgrounds to figures and models, explaining that they are never consistent with outlines as they tend to be lighter on the dark side and vice versa. He goes on to talk about the use of colours, suggesting that these should be "in tune" with each other like notes in harmony – a reference to his early education and interest in music, which he studied when young on his father's advice. Pla also suggested simplifying the customary nine-colour palette: for the most outstanding pupils it could be reduced to five, with the addition of black and white – which he described as the "antidote" to colourist painting. In his opinion, exercises performed out in the open required special study: "Due to the continual changes in the light; only one session should be dedicated to each exercise. For this it is necessary to acquire great speed of execution, but this will come with practice."2 To put together the composition, Pla suggested turning to other disciplines – such as photography for analysing outlines, especially in scenes with crowds of people. For colour contrasts and harmonies he advised using materials not necessarily connected with the work in hand – pieces of cloth, paper and objects with different tones to make a kind of collage (although he did not use that word) as a study aid to "preview" the final colour combination in the picture.

Cecilio Pla always regarded himself as a pupil of Emilio Sala's, considering him a point of reference: "My revered teacher, to whom I owe all that I am. Your work will be a reference for the young artists of all times.". His admiration for Sala's work would always be reflected in his own production. Like his teacher and friend, Pla cultivated different genres, using different techniques and supports. Indeed, his work would be characterised by its wide variety. As a draughtsman and illustrator he contributed, in the prolific period between 1893 and 1910, to publications such as La Ilustración Española y Americana, Blanco y Negro and El Apunte Artístico.

Extremely important among Pla's favourite themes were portraiture and genre painting, particularly with regard to family life. In this respect he was especially skilful at conveying a sense of harmony and tranquillity, as this delicate beach scene reveals. Nothing breaks the stillness of the afternoon except the imagined sound of the white waves lapping at the shore. The sea consists of a band of deep blue with two or three brushstrokes of green and defines a very high horizon. In the foreground, two little girls in diaphanous white dresses sit playing happily on the sand. One has an exquisite pink bow in her hair and the other is wearing a hat. In the middle of the picture, the pole of a beach umbrella sheltering part of this placid scene from the excessive light forms a vertical line parallel to the body of a woman who is also sitting on the sand. The woman looks out to sea with her back to the spectator, while nearby, another girl, older than the others, also seems to be busy playing in the sand. The woman's posture suggests that she has no reason to feel concerned about the girls as they play.

The small size of this picture and its rapid execution suggest an exercise, a quick sketch, centred on the intense light and its chromatic effects. The contrast of colours is balanced, and the painter was particularly careful to establish a rhythm between light and dark, warm and cold colours and the spaces devoted to light and shadow.

Although this painting is undated, it is possible to estimate which period in Pla's career it comes from. From 1910 Cecilio Pla was a permanent member of staff at the School of Painting, Sculpture and Engraving in Madrid, where he taught aesthetics of colour and pictorial procedures as Emilio Sala had done before him. His technique from that time on can be described as looser and freer, while the features of his personages were fainter and the brushstrokes less clearly defined and more rapidly applied. It was also at this time that he started working more intensively on contrasts between light and shade.

Cecilio Pla painted numerous beach scenes, many small in size. His protagonists were usually members of the bourgeoisie at leisure, whom he sometimes depicted as boisterous, motley groups in the water, and on other occasions sitting with their backs to the spectator with the sea in the background. However, they all confirm one of the peculiarities of Cecilio Pla's works: his capacity to convey an aura of peace and quiet and a sense of tranquillity through pleasant, well-balanced scenes which effortlessly engage the spectator.

Playing on the Beach