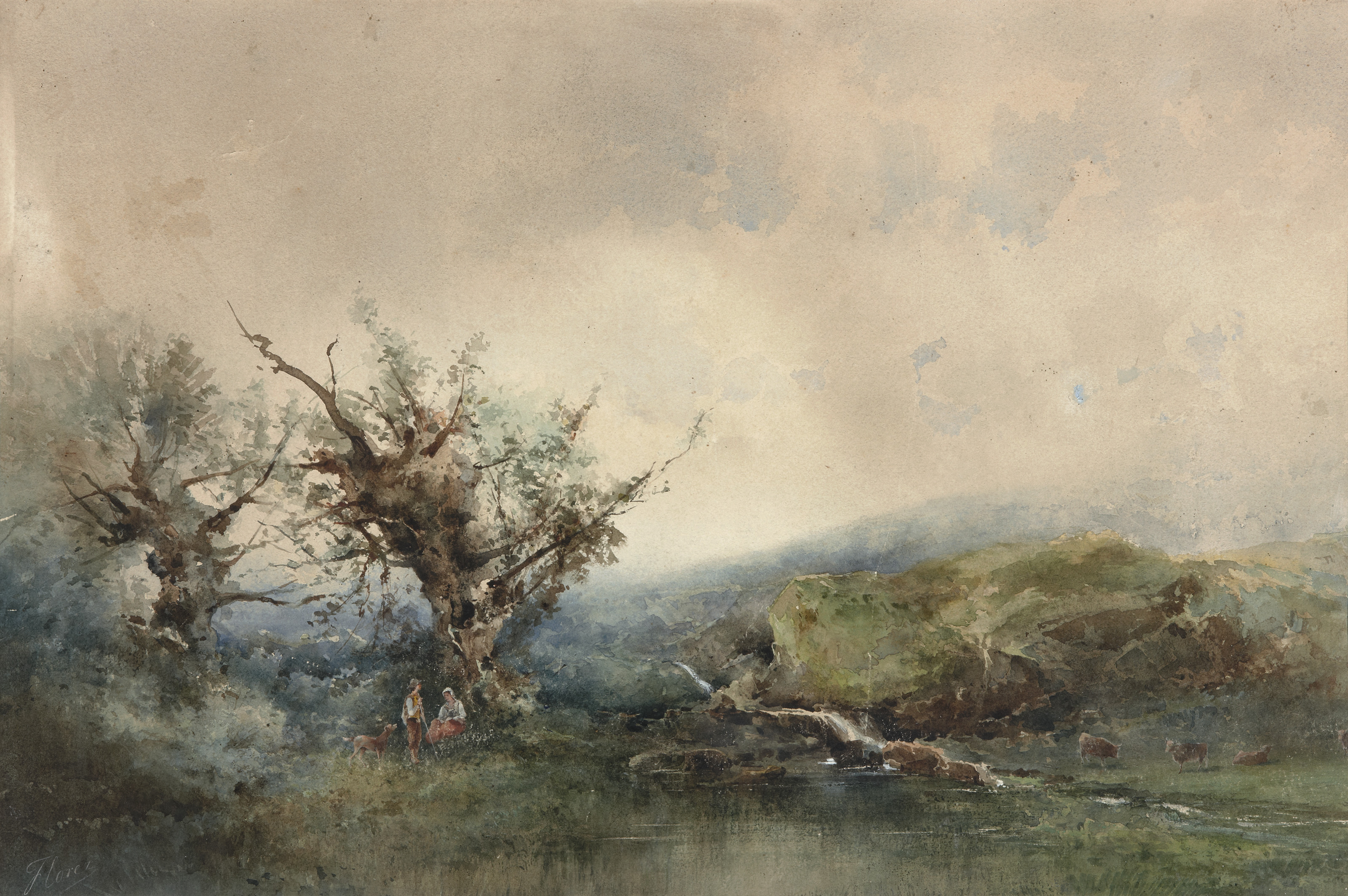 The late-Romantic vision patent in this cosmic, totalising view of nature asserting itself over – and in the process almost crushing – the tiny male and female figures (whom the title of the picture is centred around) as they take shelter beneath that almost menacing hirsute tree is not at odds – as was also true of Flórez’s master Haes – with the dry topographic precision so characteristic of the great Hispano-Belgian painter’s form of realism. Here, beneath a sky with clouds and crimson glow effects filling almost half the painting, the land is represented by a single humble field enlivened by an almost imperceptible stream, while two fantastic hairybranched trees fill the left side.

Trees like these are not rare in the work of this landscape painter, for they are seen in other idyllic country scenes such as Paisaje con ganado (“Landscape with Cattle”) which depicts cows grazing in an evanescent atmosphere, enhanced by the effects of the watercolour. This fact helps to explain the Bénézit Dictionary of Artists’ curious although somewhat exaggerated appraisal of Flórez, considering him above all a painter of soulful landscapes, all the more interesting for having obviously been influenced by Turner, for instance, when seeking to capture the golden effects of the sun through mist or the blueness of the haze over rivers.

Within that same watercolour production which displays such traits, we might cite another, untitled work featuring a number of Asturian barns that corroborate our biographical review (Casado 1999) mentioning the abundance of Asturian landscapes in Flórez’s production: almost all of the fourteen works shown at the National Exhibitions in which he took part between 1873 and 1895 were landscapes of this kind (although the aim of the 1873 exhibition was promotional rather than artistic). That does not mean to say, however, that the watercolour in this catalogue is a landscape of the Principality – we are more inclined to think it is a view of the Guadarrama, despite having no evidence to support this claim. However, certain biographical facts suggest that Flórez did spend one or two periods in Asturias and, furthermore, we should not forget the importance of that region in Spanish landscape painting due to the so-called Muros de Pravia artists’ colony, founded by Canto Plasencia, who between 1884 and 1890 gathered together a large number of Spanish landscape painter friends and pupils.

In addition to the periods Flórez spent reproducing the topography of Asturias, the titles of his works annotated in the earliest accounts reveal that his landscapes featured other regions including Galicia (Orillas del Sil – “Banks of the Sil”) for example, or Aragon (Campiña del Monasterio de Piedra – “Countryside around Monasterio de Piedra”). The setting for the latter (which he entered at the 1876 National Exhibition of Fine Arts) was also studied by his master Haes and the Hispano-Belgian’s most dedicated pupil, Jaime Morera, who accompanied Haes on a trip around 1872–73. Haes – who returned there on several occasions – had already travelled to that part of Aragon in the summer of 1856 on the invitation of Federico Muntadas, a great enthusiast of the region. In a similar (although more modest) way to that in which the Generation of ’98 championed the Guadarrama as a base for the regeneration of all things Spanish – starting with things Castilian – Muntadas also sought to promote through literature that place in the province of Zaragoza, publishing a book, El Monasterio de Piedra.

According to the list of titles of his works, Flórez also studied landscapes around Madrid, including the Moncloa area and the Royal Palace of Aranjuez viewed from the Island (a watercolour of 1886). More interesting, however, is a fact which we pointed out in the aforementioned painter’s biographical review in the 1999 edition of the Carmen Thyssen-Bornemisza Collection catalogue: Flórez produced more marine paintings than we had hitherto suspected. Evidence which now allows us to contradict our previous statement regarding our ignorance of “the effect of his oils” exists in the form of Pesca en el río (“Fishing in the River”) and Cascade de l’entreseque. However, our conclusion at the time remains valid: “We must regard him [Eduardo Flórez Ibáñez] as a diligent watercolourist, above all with regard to landscapes.”