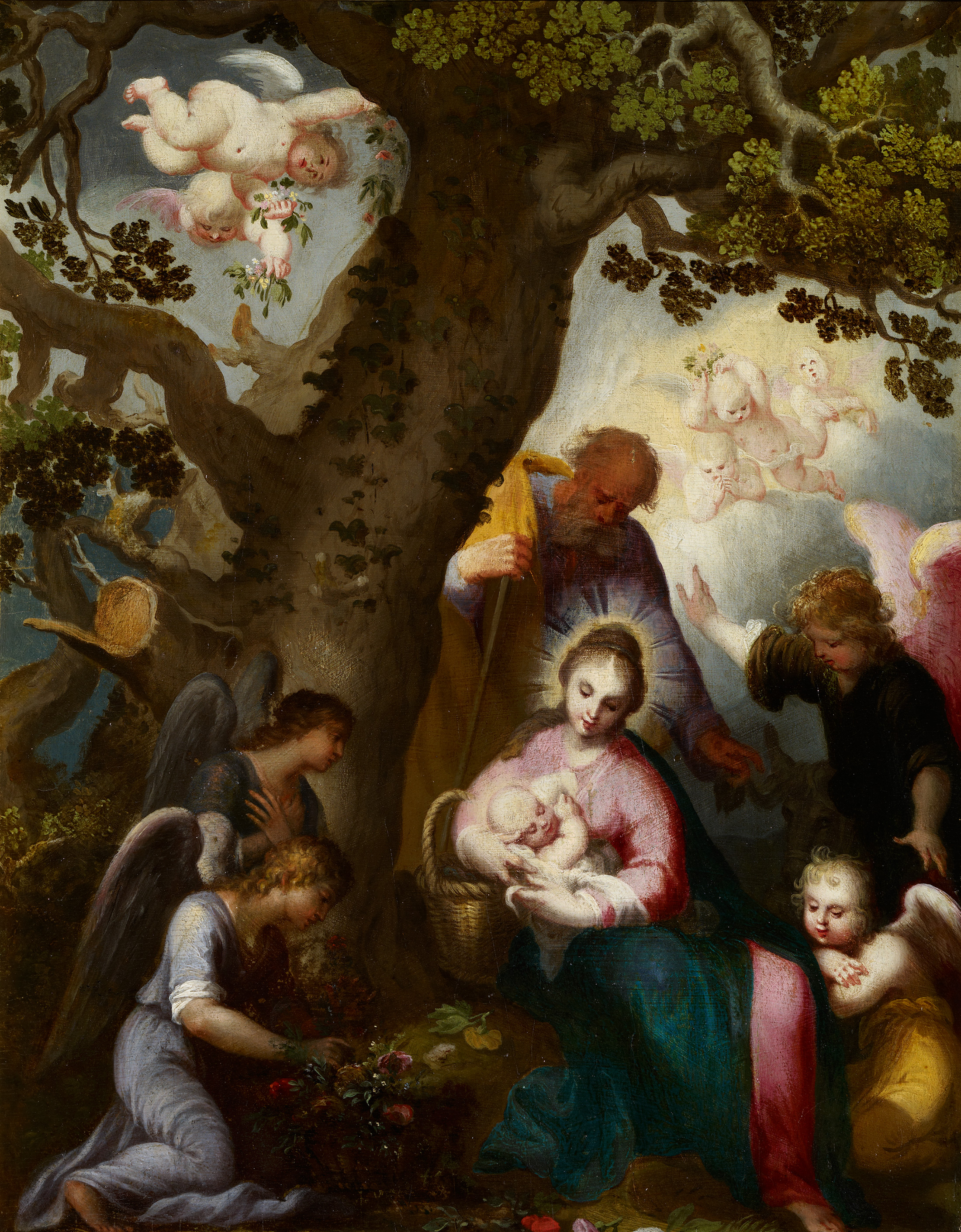 Bloemaert’s religious output was considerable, as he received numerous commissions from the Catholic circles that predominated in the city of Utrecht and he himself professed the Catholic faith. The work depicts the theme of the rest on the Flight into Egypt (Matthew 2:13–15) and shows the Virgin with the Child and St Joseph in the shade of a leafy tree and surrounded by kneeling angels that worship and appear to protect the Holy Family. The landscape is reduced to the monumental tree, the main feature of the scene, and a luminous sky in which angels and cherubim flutter in varied postures. The combination of the Gospel theme of the Flight into Egypt and the devotional image of the Mother suckling the Child was created by Flemish painters of the 15th century, and there are known examples by Gérard David and Patinir.

The attribution to Bloemaert is based chiefly on the existence of an engraving by Boëtius Adamsz Bolswert (1580–1633), who collaborated regularly with the painter in the second decade of the 17th century. The lower part bears the inscription “A Bloemaert Inventor / B.A. Bolsverd. sculp. et excudebat.” but no year, although it is generally dated to between 1612 and 1615. The composition is derived from models engraved in 1575 by Cornelis Cort, after the Italian Federico Barocci, but in Bolswert’s print the main figures are located further to one side, giving particular importance to the imposing tree, and the cherubim pertaining to Catholic worship are added.

Bloemaert must have used this compositional model in several works, as was common practice among painters of his day, but with a few variants as in the present painting, to which he has added the two angels on the left-hand side that are not found in Bolswert’s work. Based on this engraving there is a smaller painting on copper, held to be an early copy of the Bloemaert and housed in the Wallraf-Richartz Museum in Cologne. This artist is known to have been a highly skilled and dedicated draughtsman, and we may therefore assume that there was a drawing of the Rest on the Flight into Egypt, currently unlocated. There are numerous surviving drawings of figures of angels with delicate, rounded female heads and large trees – a very common landscape feature in both his paintings and his works on paper – which may be related to the models on which this painting is based. Perhaps the clearest is the drawing of a voluminous tree belonging to the collection of the Ashmolean Museum in Oxford, which, like the present work, evidences his interest in depicting details and textures and his use of many branches and leaves to give movement to the thick trunk, the main feature of the composition.

Like the engraving, this panel painting can be dated to the second decade of the 17th century, to around 1615. During his initial period Bloemaert painted whimsical forms and adopted the cold palette of the Haarlem Mannerists and of the school of Fontainebleau, with whose style he may have come into contact during his stay in France in the 1580s. But in the first decade of the 17th century his style evolved towards a calmer and more delicate language and a concern for the beauty of figures, chromatic harmony and luminosity. These qualities are found in the present painting, in which the figures have an endearing, gentle appearance that recalls the art of Italian painters like Correggio and Barocci, whom the artist followed chiefly through engravings. A further factor related to this development is the influence of the tempered classicism that was imported from Italy by Goltzius and which Bloemaert espoused, as may be seen in this work, before shifting in 1620 towards the tenebrist naturalism of Caravaggio, which he learned from his own pupils, among them Van Honthorst.